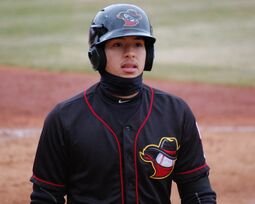 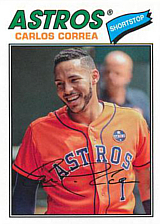 Shortstop Carlos Correa is an All-Star shortstop and world champion who was mixed up in the Houston Astros sign-stealing scandal.

Carlos was taken by the Astros with the first overall pick in the 2012 amateur draft, becoming the first player from Puerto Rico ever to be chosen in that position. Even in a draft with no consensus top pick, Correa's selection was considered a bit of a dark horse, as he had not featured in speculation about the eventual top choice. He strongly impressed Astros' officials in late workouts before the draft and they compared him to a young Alex Rodriguez and center fielder Carlos Beltran, the best position player to emerge out of Puerto Rico in the last two decades. Correa was a product of Major League Baseball's efforts to foster the rebirth of baseball in neglected urban areas. He had played in the "Reviving Baseball in Inner Cities (RBI)" program from the age of 10, and most recently was attending the Urban Youth Academy's Puerto Rico Branch. Fellow first-rounder Jesmuel Valentin was also in that program, as were two other players drafted in later rounds.

Contrary to most top selections in recent years, Correa reached a quick agreement. On June 6th, barely two days after the draft, owner Jim Crane announced that he had reached a verbal agreement with the youngster, and that a formal announcement only awaited a physical exam, putting him on track to sign and take part in a pre-game workout the following day. His signing bonus was reported to be $4.2 million, well under the $7.2 million target outlined by MLB for the draft's top pick. He was to return to Puerto Rico to attend his high school graduation, then report to the Astros' spring training complex in Kissimmee, FL before starting his professional career with the GCL Astros. In his pro debut, he hit second and played short in a 1-0, 13-inning win over the GCL Cardinals on June 18th. He singled and stole second in his first plate appearance and finished one for five with a walk, steal and error for the day. His 2014 season was cut short when he fractured his fibula just above his right ankle in June. He hurt his leg sliding into third base on a triple while playing for the Lancaster JetHawks of the California League on June 21st. As a result, he played only 62 games, hitting a solid .325/.416/.510, with the caveat that Lancaster was possibly the most hitter-friendly environment in organized baseball. His injury came at the same time as the Astros' other two overall number 1 picks were also experiencing difficulties, with Mark Appel struggling on the mound at Lancaster and Brady Aiken failing to sign with the team after being the top pick in the 2014 draft. This led observers to wonder if the Astros had really received all the bang they could have from their years of finishing in last place.

Correa was back on the fast track to the bigs at the start of 2015, as no one expected his injury to have lasting ill effects. All major prospect ranking organizations ranked him either third or fourth heading into the season, and he was assigned to the Corpus Christi Hooks of the AA Texas League to start the year. He absolutely tore up the circuit, batting .385 with 7 homers and 32 RBI in 29 games to earn a promotion to the AAA Fresno Grizzlies in mid-May. He hit .266 in 23 games, when the Astros, finding themselves in first place in the AL West, decided to call him up on June 8th. In 52 minor league games, he amassed an amazing 21 doubles, 10 homers, 43 runs scored and 43 RBI; he also was successful on 18 of 19 stolen bases attempts.

Carlos made his debut as the Astros' starting shortstop against the Chicago White Sox on June 8th, getting one of only five hits off Chris Sale and driving in his team's only run in a 3-1 loss. He was the youngest player in the major leagues at that point. More milestones came in his his second game, on June 9th, as he stole his first base and connected for his first home run, a two-run 9th-inning shot off Zach Duke in a 4-2 loss to the Sox. He also homered in his first game at Minute Maid Park, going deep off Joe Beimel of the Seattle Mariners in a 10-0 win. He showed another facet of his talent on June 18th when he stole three bases in a win over the Colorado Rockies; he was the second-youngest player ever to pull off the feat, after Rickey Henderson. He was named the American League Rookie of the Month for June, after hitting .287 with 9 doubles, 5 homers and 15 RBI, even after not making his debut until a week was gone in the month. He finished the season with a .279/.345/.512 line, 22 doubles and 22 homers in 99 games. He went 0-for-4 in the Wild Card Game, then in the Division Series, he hit .350 with 2 homers as the Astros lost in five games to the Kansas City Royals. After the season, he was voted the American League Rookie of the Year, finishing ahead of Francisco Lindor of the Cleveland Indians. In 2016, Carlos became the youngest Astro to homer on Opening Day, crafting a fine .274/.361/.451 line in his first full season (153 games), belting 20 home runs and driving in 96 runs. He led the majors in walk-off hits, belting four.

He was very effective for the Puerto Rican national team that finished second in the 2017 World Baseball Classic, with homers off Jhoulys Chacin, Jordan Romano and Rick van den Hurk and hitting .333/.500/.750 with 10 runs and 9 RBI in 8 games. He was named the event's All-Star third baseman as Lindor was the shortstop for Puerto Rico (and also made the All-Star team). He tied Wladimir Balentien for the tourney lead in runs, tied for 2nd in homers (with John Andreoli, Alfredo Despaigne, Nelson Cruz, Sho Nakata and Yoshitomo Tsutsugo, one behind Balentien), was 2nd in RBI (3 behind Balentien), tied Despaigne for 3rd in total bases and tied for 4th with two steals (even with Kosuke Tanaka, Eddie Rosario and Dalton Pompey). Had Puerto Rico won, he would have likely been a MVP candidate, but the award went to Marcus Stroman of the victorious USA.

Correa was named the American League Player of the Month in May 2017, after hitting .386 with 24 runs scored, 8 doubles, 7 home runs and 26 RBI; not coincidentally, the Astros finished the month with the best record in the majors. He was voted the starting shortstop at the All-Star Game, playing alongside his double play partner, José Altuve, as well as center fielder George Springer. On July 18th, he went on the disabled list with torn ligaments in his left thumb, an injury sustained while swinging the bat the previous day. The Astros had their worst month in August in his absence, but he returned on September 3rd, collecting an RBI single in an 8-6 win over the New York Mets that completed a three-game sweep in the team's return to Minute Maid Park after having been temporarily displaced by Hurricane Harvey. On September 27-28, he had back-to-back four-hit games, topping the second, a 12-2 win over the Boston Red Sox, with his 24th homer of the year as he finished the year on a torrid streak. He ended up at .315/.391/.550 in 109 games, with 24 homers and 84 RBI in addition to 82 runs scored. He was a key figure in the Astros' conquest of the first World Series title in their history, as he banged 21 hits in 73 at bats (.288) with 5 doubles, 5 homers, 10 runs scored and 14 RBI during the three rounds of the postseason. In the World Series, he hit a pair of homers in Houston's seven-game triumph over the Los Angeles Dodgers.

Carlos was very involved in efforts by ballplayers hailing from Puerto Rico to provide assistance following the devastation wreaked by Hurricane Maria in September 2017. In fact, he skipped the Astros' visit to the White House on March 12, 2018, when they met President Donald Trump. There was speculation this was a political gesture directed against the President's contemptuous comments about the island in the wake of the storm (teammate Carlos Beltran, who is also from Puerto Rico, skipped the event as well), but he simply wanted to take the day off to provide practical help to his countrymen. He spent the day gathering relief supplies to send to the island, explaining that as an American citizen from Puerto Rico, it was his responsibility to bring awareness to the continuing suffering experienced by the islanders. He again missed time in 2018, playing 110 games but missing all of July and parts of June and August as well due to lower back soreness. The injury depressed his batting average and sapped his power, as he only hit two long balls after his return, including one in his last game before the postseason, on September 29th. He hit just .239/.323/.405 as a result, with 15 homers and 65 RBI. He was only 1-for-10 in the Division Series win over the Cleveland Indians, his only hit being a homer, but bounced back to go 6-for-19 in a losing cause in the ALCS, where the Astros were defeated by the Boston Red Sox in 6 games.

He was back at an elite level at the start of the 2019 season, as in his first 50 games, he hit .295 with 11 homers and 35 RBI while the Astros were running away with the AL West title. The injury bug bit him again, in a most unusual way; on May 29th he was placed on the injured list after suffering a broken rib during a massage at home. He missed almost exactly two months, playing only 75 games with a .279/.358/.568 line, 21 homers and 59 RBI. Though his hitting line was far from robust in the postseason, he did belt a couple of big home runs, including a walk-off in the ALCS against the New York Yankees. The Astros fell in seven games to the Washington Nationals but their troubles were just beginning with the revelation they had been stealing signs for much of the magical 2017 season. For his part, Correa issued a sincere apology for his partaking as Houston entered the 2020 season public enemy number one.

Carlos's younger brother, second baseman Jean Carlos Correa, also attended the Puerto Rican Baseball Academy and, in 2017, joined Alvin Community College in the Houston area. He was drafted by the Astros in the 38th round in the 2019 amateur draft.