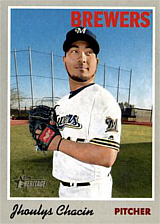 Jhoulys Chacín is a well-traveled starting pitcher, dealing for seven teams in eleven seasons thus far. He was a 15-game-winner in 2018 for the Milwaukee Brewers.

Chacín was signed by scouts Rolando Fernandez, Francisco Cartaya and Orlando Medina for the Colorado Rockies in 2004. He made his debut in 2005 when he went 3-1 with a 4.32 ERA and 48 strikeouts in 50 innings for the DSL Rockies. With the same club in 2006, the teenager was 4-1 with a 1.49 ERA, fanning 67 while allowing 60 hits and 18 walks in 72 2/3 innings. Jhoulys came stateside in 2007 with the Casper Rockies, going 6-5 with a 3.13 ERA and making the Pioneer League All-Star team. He was third in the circuit in ERA, tied Juan Moreno and Robert Fish for the strikeout lead (77) and led in innings pitching (92). Baseball America rated him the 13th best prospect in the league. He was even better in 2008, splitting the year between the Asheville Tourists (10-1, 1.86, .205 opponent average) and Modesto Nuts (8-2, 2.31, only 12 walks in 66 1/3 innings). He was named Colorado's Minor League Player of the Year by Baseball America, leading the affiliated minors in wins (18), tied for third in innings (177 2/3) and was sixth in ERA. His 160 strikeouts tied Cory Riordan for most in the Rockies chain and tied for 6th in the affiliated minors. Had he qualified, he would have been second in the South Atlantic League in ERA (behind Madison Bumgarner) and led the California League in ERA; as is, he made the SAL All-Star team as the top right-handed pitcher despite his mid-season call-up. Baseball America rated him the SAL's 4th best prospect behind future All-Stars Bumgarner, Jason Heyward and Mike Stanton. Baseball America ranked him the 5th-best Cal League prospect after Trevor Cahill, Carlos Santana, Lars Anderson and Brett Anderson. They also named him Colorado's 2nd best prospect and possessing the best changeup of any Rockies farmhand.

In 2012, shoulder inflammation limited Chacín to 14 starts and 69 innings as he missed the middle of the season. In his absence, the Rockies experimented with a four-man starting rotation in which starters were limited to 75 pitches, a move which continued after his return in August and depressed every starter's statistics - not that the team's awful performance did not do a good job of that by itself. Thus, Chacín had a record of 3-5, although for the third straight year, his ERA+ was above average, as his 4.43 ERA translated into a 108 ERA+. He was eligible for arbitration after the season. After he and the team exchanged initial figures, they agreed on a two-year deal on January 27th that would pay him a total of $6.5 million. Around that time, Jhoulys was also named a member of the Venezuelan national team for the 2013 WBC. He also pitched for Caracas for the first time in three years, going 3-1 with a 4.04 ERA. He went on to have an excellent 2013 season, making 31 starts and going 14-10 with a 3.47 ERA in 197 1/3 innings.

The Rockies got some bad news as spring training was getting under way in 2014, as Chacín was shut down in late February with inflammation in his right shoulder and had to undergo an MRI. He made only 11 starts that season with poor results: a 1-7 record and a 5.40 ERA. When he had still not regained his velocity and was being bombarded in spring training in 2015, the Rockies surprisingly gave him his unconditional release in order to save part of the $5.5 million still due. They judged that he was unlikely to recover enough to give them any value that season and preferred to cut him loose. Given his past success, it was likely another team would give him a chance to work himself back, but at a significantly lower salary. He joined the Cleveland Indians, but opted out in mid-June when he was not brought up to the big league team after pitching well for the AAA Columbus Clippers (1-3, 3.21 in 7 starts). He joined the Arizona Diamondbacks and spent most of the rest of season of the minors, going 6-3, 3.22 with the Reno Aces. He made only 5 appearances with the big league D-Backs in 2015, going 2-1, 3.38 during that span. Chacín joined the Atlanta Braves before the 2016 season and went 1-2, 5.40 in 5 starts before being traded on May 11th to the Los Angeles Angels of Anaheim. He pitched 29 games for the Halos, including 17 starts, and was 5-6, 4.68. He moved again after the season, this time to the San Diego Padres, and continued on a path of steady improvement. He was the team's most effective starting pitcher in 2017, with a record of 13-10, 3.89 in 32 starts and 180 1/3 innings, striking out 153 hitters.

Having demonstrated his value, he was able to sign a two-year deal with the Milwaukee Brewers on December 20, 2017 reported to be worth $8 million per year. It turned out to be an excellent signing, as Chacín was the ace of the staff in 2018, going 15-8, 3.50 in 35 starts and logging 192 2/3 innings with 156 strikeouts. On October 5th, he made his postseason debut, winning Game 2 of the NLDS against the Rockies by pitching 5 scoreless innings before letting the bullpen do the rest. He made two more starts in the NLCS against the Los Angeles Dodgers, going 1-1, 2.45. His start in the decisive Game 7 on October 20th lasted just 2 innings as manager Craig Counsell decided to warm up ace reliever Josh Hader when he ran into some trouble. Not wanting to force his key reliever to get up and down numerous times in the bullpen, Jhoulys was pinch hit for in the bottom of the 2nd.

In 2019, things did not go as well even though the Brewers continued to be one of the top teams in the National League. Jhoulys was the team's Opening Day starter, but by the end of May, he was leading the league with 7 losses, against just 3 wins, and his ERA was 5.74 after 12 starts. His final start of the month, on May 31st against the Pittsburgh Pirates, went particularly bad as he gave up 7 runs in just 2 2/3 innings, including a horrendous 3rd inning in which he walked three consecutive batters with the bases loaded. He went on the injured list twice, from June 2-17 with a lower back strain, and again starting on July 25th with an oblique strain. In 19 starts, his record was 3-10, 5.79. As Milwaukee fell behind in the division title race with the final month about to start, they decided to cut a couple of pitchers who had been huge contributors but had now regressed; on August 26th, Chacín was released, followed four days later by reliever Jeremy Jeffress, who had also struggled all season. Chacín was signed by the Boston Red Sox on September 1st, where he had an 0-2, 7.36 record in 6 games, to finish at 3-12, 6.01.

In February 2020, he signed a minor league deal with the Minnesota Twins, but he failed to impressed and was released on July 19th, just before the delayed start of the season. But he immediately landed on his feet as the Atlanta Braves picked him up two days later and placed him on their opening day roster.