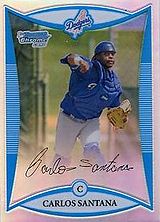 Carlos Santana is an infielder-catcher who made his major league debut with the Cleveland Indians in 2010.

Originally signed out of the Dominican Republic by scout Andres Lopez for the Los Angeles Dodgers in 2004, Santana was traded to the Indians along with Jon Meloan on July 26, 2008 in return for 3B Casey Blake. While he had already been considered a prospect before that year, he took a huge step forward in 2008, hitting .326 in 130 games between three teams, playing almost exclusively in Class A ball. It was not an empty batting average, either, as he banged out 39 doubles and 21 homers, drove in 117 runs and drew 89 walks. He was named the California League MVP after the season.

With nothing left to prove in the minor leagues, Santana was promoted to Cleveland in early June, 2010. After going hitless in his major league debut, his bat came alive, and after 9 games, he was hitting .393 with 5 doubles and 2 homers, seemingly finding major league hurlers no more challenging than his opponents over the previous three seasons in the bushes. Overall, he hit .260/.401/.467 in 46 games, but his season ended with an injury suffered on August 2 in a collision at home plate with the Boston Red Sox's Ryan Kalish.

On April 3, 2011, making his first career start at first base against the Chicago White Sox, Santana started a triple play by diving to catch a bunt popped along the first base line by Alexei Ramirez; both baserunners, Carlos Quentin and A.J. Pierzynski, were running on the play and were doubled off easily when Santana relayed to 2B Orlando Cabrera, covering first base, who in turn lazily flipped the ball to SS Asdrubal Cabrera who was standing on second base while Quentin did not even attempt to return.

On December 15, 2017, he signed a three-year contract with the Philadelphia Phillies worth $60 million. That forced the Phillies to use Rhys Hoskins in left field, where his defence left a lot to be desired, while Santana did not give them the production they were hoping for. He started off stone cold, hitting .153 and slugging .276 in April, and even though he did better after that, he still ended up at .229 with 24 homers and 86 RBIs. While he still at an OBP of .352, thanks to 110 walks, it was also below his career mark. After the season, which ended in disappointment with the Phils missing the postseason after contending most of the year, Philadelphia decided to move him, although the two expensive years remaining on his contract made that a challenge. However, they did manage to do so by taking on another large contract, that of SS Jean Segura, accompanied by Ps Juan Nicasio and James Pazos, forcing the Seattle Mariners to accept the first baseman in order to receive one interesting prospect in the deal which was concluded on December 3rd. He only stayed with Seattle 10 days, as on December 13th he was traded back to his former team, the Indians, in exchange for DH Edwin Encarnacion.

Carlos' first homer in his second stint with the Indians was of the walk-off variety, on April 5, 2019. It came off Joe Biagini of the Toronto Blue Jays with one out in the bottom of the 9th and the solo shot gave Cleveland a 3-2 win. He went on to play 158 games that season and became an All-Star for the first time as he hit .281 with 34 homers, 93 RBIs and an OBP of .397. Discounting his 46-game rookie season in 2010, it was the highest batting average and OBP of his career, and he also set marks for slugging percentage (.515), RBIs, runs scored (110), hits (161), homers and total bases (295). In 2020, in a season abbreviated to 60 games by the Coronavirus pandemic, he played in every regular season game and led the AL in walks with 47, although his other numbers fell drastically. He hit just .199, although the numerous walks meant his OBP was still good at .349, while his slugging percentage was just .350. He hit just 7 doubles and 8 homers, scored 34 runs and drove in 30. His OPS+ of 91 was the lowest of his career, and indeed the first time it had fallen below 100 (even in his sole disappointing season with the Phillies, it had been 105 thanks to his excellent batting eye). The Indians did return to the postseason, although they lost both of the games they played against the New York Yankees in the Wild Card Series. Carlos went 0 for 8 with a walk and a run scored in the two games.

The three-year contract he had originally signed with the Phillies expired after the 2020 season, and on December 8th, he changed teams again, signing a two-year deal this time, with the Indians' divisional rivals, the Kansas City Royals. Its total value was said to be $17.5 million.