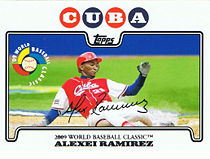 Alexei Ramírez was a productive player in his native Cuba for several years and played on the Cuban national team before coming to the USA for 2008. 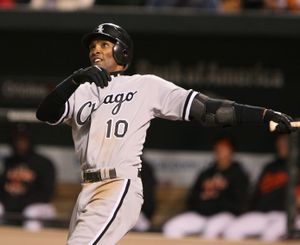 Ramírez first made a splash for Pinar del Río in the 2002-2003 Serie Nacional, leading the league with 131 hits. In the 2004 Super Liga, he led with 25 hits. He had his first major competition for the Cuban national team on a major stage with the 2004 Olympics, hitting .278/.278/.278 in 9 games, playing 6 in right field, 2 in center field and one at shortstop. He had one at-bat in the Gold Medal game after replacing Osmani Urrutia in the field when Cuba led 6-1.

In the 2006 World Baseball Classic, Ramírez hit .375/.389/.500 to finish third on Cuba in OPS behind Yoandy Garlobo and Frederich Cepeda in his first real starting role for the Cuban national team. He was 1 for 4 with a double in the final game, a loss to Japan, hitting 8th and playing center field. He hit .250/.294/.500 with 10 runs and 10 RBI in nine games as Cuba's right fielder in the COPABE Olympic Qualifier to help Cuba clinch a spot in the 2008 Olympics. He was 3 RBI behind tourney leader Alexander Mayeta. In the 2006 Intercontinental Cup, he was 0 for 4 back on the bench as a backup outfielder behind Cepeda, Giorvis Duvergel and Yoandry Urgellés. During the 2006 Central American and Caribbean Games, Alexei hit .357/.379/.429 with 6 runs in 7 games for the Gold Medalists.

Ramírez had a surprisingly strong season in the 2006-2007 Serie Nacional, hitting .335 (not in the top 10 in average) with 20 homers, the most in the circuit. He led in total bases (195), was second in slugging (.574, trailing Juan Carlos Linares) and second in RBI (68, trailing José Julio Ruíz). The power was most surprising as he had only averaged 11.2 homers through his first six seasons.

With Michel Enríquez suspended by Cuba for an attack on an umpire, Gourriel moved from 2B to 3B for the national team and Ramírez moved from the outfield to second base. In the 2007 Pan American Games, he hit .278/.278/.389 for the Gold Medalists.

In September of 2007, Ramírez moved to the Dominican Republic with his wife (a Dominican native who had been studying medicine in Cuba) and two kids, saying he wanted to take a crack at Major League Baseball. Ramírez made it clear he was not a defector, a move which drew some criticism from the Cuban-American community. Ramírez was the most accomplished Cuban hitter to come to the US since Kendry Morales with his one home run title, three hit titles (two in the shortened Super Liga) and several national team appearances, including a couple of starting turns.

Ramírez signed with the Leones del Escogido but was just 1 for 14 with four strikeouts, a run and a RBI in the Dominican League and was released. He then signed with the Chicago White Sox for $4.75 million over four years. White Sox manager Ozzie Guillen nicknamed him a "Cuban Missile" in spring training and the name quickly caught on.

Ramírez debuted on Opening Day 2008, going 0 for 4 and handling three chances flawlessly in center field. Hitting 6th, he faced C.C. Sabathia in the second inning for his first major league at-bat and grounded weakly to Casey Blake. He started his MLB career by going 0 for 13. He hit .315 in his next 89 at-bats, but had only drawn two walks. He slugged .494 in that 89-AB stretch. He eventually settled into a job as the White Sox's regualr second baseman, and did very well, batting .290/.317/.475 in 480 at-bats for the year, with 22 doubles, 21 home runs and 77 RBI. He set a rookie record with 4 grand slams; the previous record of 3 was held by Shane Spencer. He started all four of Chicago's games against the Tampa Bay Rays in the ALDS, going 3 for 12 with a walk, run and 2 RBI. He finished second in the American League Rookie of the Year Award voting, behind Tampa Bay's Evan Longoria.

Ramirez spent eight full seasons and played over 1,200 games with the White Sox from 2008 until the end of the 2015 season. After moving around various positions as a rookie, he was a full-time shortstop from 2009 onwards, playing every single one of his games there except for a pair of games as a DH and one pitching appearance in a blow-out game in 2015. He won two Silver Slugger Awards as the best-hitting shortstop in the American League, in 2010 and 2014, and was an All-Star in 2014. Highlights of his stay include scoring 80 or more runs in three separate seasons, hitting 30 or more doubles on four separate occasions, with a high of 39 in 2013, and six seasons in double figures in home runs, although he only hit 20 or more once, in his rookie year. Still, for all of that, he was generally a below-average offensive player, putting up an OPS+ above 100 only twice, in his first season and in 2014. The problem was that he walked very little, with an OBP of only .310 in his time in Chicago. Still, his long tenure at shortstop put him in a line of men who had occupied the position for long stretches with the White Sox, the most famous being Hall of Famers Luke Appling and Luis Aparicio, but the group also including Chico Carrasquel and Guillen.