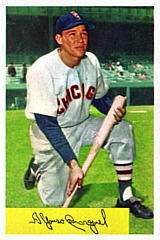 “I had seen so many good shortstops, but Chico played like no one I had ever seen. Gee whiz, this guy never misses a ball! What a glove. What hands. Perfect throw to first base all the time.” - Minnie Minoso, to Tim Wendel, for the 2004 book The New Face of Baseball: The One-Hundred-Year Rise and Triumph of Latinos in Baseball

During a decade-long career in the majors, shortstop Chico Carrasquel was most noted for his defensive skills. He was one of the first big league stars to come out of Venezuela and was a national hero in his home country. In 1951, he became the first Latin American to earn a start in an All-Star Game.

The son of a beer salesman, Carrasquel followed in his uncle Alex's footsteps and pursued a baseball career. By his mid-teens, he had quit school and played for the Venezuelan national team that won the 1945 Amateur World Series while still a teenager. The Brooklyn Dodgers signed him prior to the 1949 season. He was initially assigned to the Montreal Royals, but skipper Clay Hopper refused to play him because he did not speak English, so the Dodgers sent him to the Fort Worth Cats of the Texas League, where he earned the nickname "Chico". He responded by hitting .315 and finishing second among shortstops in the circuit in fielding.

Carrasquel's path to the majors was blocked by the Dodgers shortstop, Hall of Famer Pee Wee Reese. Following his first season, he was acquired by the Chicago White Sox, who made him an Opening Day starter in 1950, succeeding another Hall of Famer, Luke Appling. With the assistance of Cuban-born teammate Luis Aloma, who served as his translator, the language barrier was overcome and he responded by having a stellar rookie campaign. That year, he hit .282 with 72 runs scored and recorded a 24-game hitting streak while finishing third in Rookie of the Year voting. The following summer, in 1951, he became the first Latin player to appear and start in the All-Star Game, outpointing Phil Rizzuto in the fan vote for the honor. He made two more All-Star Game starts in 1953 and 1954 while coming on to relieve Harvey Kuenn in the 1955 All-Star Game, all with the ChiSox. He was usually good to hit between at least .250-.275 while proving more than adept with the glove. Chico had his best year with the Sox in 1954, hitting .255 with 12 homers while scoring 102 runs. On April 23, 1955, he had perhaps his finest game, going 5-for-6 while scoring 5 times as the Sox destroyed the A's, 29-6.

The White Sox soon had another Venezuelan shortstop, Luis Aparicio, waiting in the minors, and with skipper Marty Marion preferring Luis to Chico, they traded Carrasquel to the Cleveland Indians for Larry Doby following the 1955 season. He saw two more seasons of near regular work with, with his best year with the Tribe in 1957, when he posted numbers of .276/.351/.378 with 8 home runs. He was dealt to the Kansas City Athletics for Billy Hunter during the 1958 season, and played his final season with the Baltimore Orioles in 1959.

In his career, Chico hit .258/.333/.342 with 1,199 hits and 568 runs scored in 11 seasons (1,325 games). While his lifetime batting average and slugging percentage were very similar to those of Aparicio, Carrasquel drew more walks and thus had an on-base percentage 20 points higher (Aparicio's career line: .262/.311/.343, but in nearly double Chico's amount of play at 2,599 games). Chico saw his fair share of accolades for his play as well. He was part of the inaugural class of inductees in both the Venezuelan Baseball Hall of Fame (2003) and the Latino Baseball Hall of Fame (2010). He later made the Caribbean Baseball Hall of Fame in 2020.

After his playing career, Carrasquel returned to Venezuela, where he was a manager, a major league scout for the Kansas City Royals and New York Mets, and a broadcaster. He later worked in the White Sox front office and did Spanish-language radio broadcasts of Sox games for many years. In 2003, Carrasquel was injured during a carjacking in his native Venezuela. On May 26, 2005, he died in his homeland of cardiac arrest. Numerous Spanish-language writers eulogized him.