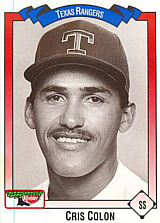 Cris Colón played 14 games with the 1992 Texas Rangers, batting .167 (6-for-36) with 5 runs scored. He later hit .432 in the qualifying tourney for the 1998 Baseball World Cup but the Venezuelan national team finished sixth in the Americas when only the top five teams made it. He also played for Venezuela when they won Bronze in the 1998 Central American and Caribbean Games. He is the nephew of Alex Carrasquel, Chico Carrasquel, Domingo Carrasquel Sr. and Manuel Carrasquel and the cousin of Alfonso Collazo, Domingo Carrasquel Jr., Emilio Carrasquel and Martin Carrasquel.