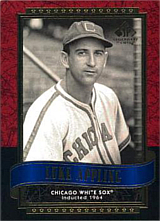 Inducted into Hall of Fame in 1964 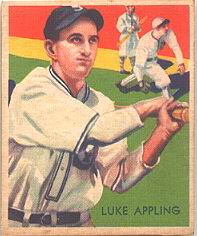 "I played with him and against him, and he was the finest shortstop I ever saw. In the field, he covered more ground than anyone in the league. As a hitting shortstop, there was no one in his class." - Eddie Lopat

"His constant stream of complaints might have become intolerable to his teammates if Appling had not developed a novel remedy. He simply took his misery out on opposing pitchers, rapping out 2,749 hits, all but 587 of them singles." - Robert McG. Thomas Jr, the New York Times

Luke Appling was a Hall of Fame shortstop who played his entire career with the Chicago White Sox.

Appling was born in High Point, NC, but moved to Atlanta with his family as a child. His father was on the Atlanta detective force until he went into the furniture business. Luke graduated from Fulton High School, where he played baseball. He attended Oglethorpe College, where he also played fullback on the football team, but left during his sophomore year when he was signed by the Southern League's Atlanta Crackers in 1930. He was a good hitter in his first year but committed 42 errors in 104 games. The Chicago Cubs showed some interest at first but decided not to sign him, and the White Sox ended up purchasing him from the Crackers for $20,000. He was signed by the husband-wife scouting team of Roy and Bessie Largent and made his major league debut on September 10, 1930. He seemed a poor pickup initially, as his hitting fell off and his fielding failed to improve, but in 1933 he stopped trying to be a power hitter and enjoyed his first of nine straight .300 seasons.

Appling was famous among his teammates for complaining day in and day out about minor ailments such as a sore back, a weak shoulder, or shin splints. While much of this complaining was probably for show, it earned him the moniker "Old Aches and Pains". He did suffer one serious injury: a broken leg that cost him much of the 1938 season. He was also well known for his ability to foul off pitches, leading to the story that he once fouled off 10 pitches in a row on purpose when ownership refused to provide baseballs to autograph because they were too expensive; he was supposedly never refused a ball again.

Though Appling was 36, married with two children and originally classified 3A in the draft, on November 15, 1943, he was reclassified 1A and inducted in the Army at Fort Sheridan, IL. He was later stationed at Camp Lee, VA and at a reclamation center in Atlanta. He was discharged on August 29, 1945, and appeared in his first game back on September 2nd.

Appling remained a solid contributor into his forties, but ownership was dedicated to a youth movement and he retired after the 1950 season. At his retirement, Appling was the all-time leader for most games played and double plays by a major league shortstop, and the all-time leader for putouts and assists by an American League shortstop. These records were later broken by Luis Aparicio, who also spent the majority of his career with the White Sox.

Appling was a successful minor league manager after his playing days were over, winning pennants with Memphis in the Southern Association and Indianapolis of the American Association and being named minor league manager of the year in 1952. He was a coach for the Detroit Tigers in 1960, the Cleveland Indians in 1961, the Baltimore Orioles in 1963, the Kansas City Athletics from 1964 to 1966, the White Sox in 1970 and 1971 and the Atlanta Braves in 1981 and 1984. His only chance to manage at the major league level was as a late-season replacement for Alvin Dark as manager of the Kansas City Athletics in 1967, leaving his major league managerial record 10-30. At age 75, he shot back to fame for a brief time when he appeared in an old-timers game played at RFK Stadium in Washington, DC and hit a home run off Warren Spahn.

Some or all content from this article is licensed under the GNU Free Documentation License. It uses material from the Wikipedia article "Luke Appling".