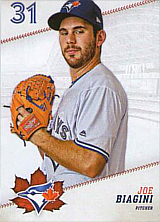 Pitcher Joe Biagini made his major league debut in 2016. His father, Rob, played two seasons in the minors.

Biagini was taken by the San Francisco Giants in the 26th round of the 2012 amateur draft; the scout was Keith Snider. He split the summer between the Salem-Keizer Volcanoes (2-4, 4.27, 63 strikeouts in 59 innings) and Augusta GreenJackets (0-4, 7.41, 29/36 BB/K in 34 innings). He was 6th in the Northwest League in whiffs (between Justin Hancock and Juan Marcano). With Augusta in 2013, he was sharper: 7-6, 5.03, though his strikeout rate was down (79 in 96 2/3 innings). He improved to 10-9, 4.01 for the 2014 San Jose Bees, tying Jason Berken for 6th-most wins by a Giants farmhand. In the California League, he tied for 6th in wins (with Tyler DeLoach, Zach Eflin and Ben Lively). He made even bigger strides in 2015 with the Richmond Flying Squirrels, posting a 10-7, 2.42 record. He was second in the Eastern League in ERA (.28 behind Michael Fulmer) and tied for 7th in wins. He tied Clayton Blackburn and Kelvin Marte for second in the Giants chain in wins (behind Ty Blach) and was second to Mark Reyes in ERA. Despite that success, the Giants did not add him to their 40-man roster...

...so the Toronto Blue Jays took him in the 2015 Rule V Draft. Joe made the team out of spring training and made his major league debut on April 8, 2016, pitching a scoreless inning of relief in an 8-7 loss to the Boston Red Sox. Entering in the 9th with the one-run deficit in place, he relieved Gavin Floyd and retired Xander Bogaerts, David Ortiz (on a strikeout) and Hanley Ramirez, the heart of the Red Sox order. He was one of the Jays' most reliable relievers that season, pitching 60 times with a 4-3 record, a save and a 3.06 ERA. He made 6 appearances in the postseason and did not give up a run in 7 1/3 innings; in fact, he gave up only 3 hits and 1 walk while striking out 6 as manager John Gibbons was not afraid to use him in any spot.

After he pitched exclusively in relief as a rookie, the Blue Jays stated in spring training in 2017 that he was an option to become a starting pitcher if the need arose. The need arose, naturally, when J.A. Happ and Aaron Sanchez were both placed on the disabled list in April. His first career start came on May 7th and he gave up only an unearned run in 4 innings against the Tampa Bay Rays then, on May 12th, he earned his first win in the role with 5 scoreless innings against the Seattle Mariners. The two solid performances lowered his ERA to 2.28 on the year. In his third start against the Atlanta Braves on May 17th, he gave up 6 runs in the 1st inning. The Jays could not climb out of that early hole and lost, 8-4. He had his first career plate appearance in the game, successfully laying down a sacrifice bunt. After a no-decision in his next start, Biagini lost four consecutive starts, including a game against the Chicago White Sox on June 16th in which he gave up 7 runs in just one inning of work. He did manage to win his next start, 7-5, over the Texas Rangers on June 21st, but that was largely because the Jays' hitters spotted him a six-run lead in the 1st inning, which he allowed to gradually erode until he was lifted with two outs in the 6th and the Rangers having scored four times against him. He was 2-6 with a 4.45 ERA at that point, with his ERA as a starter at 4.91. He finished the season at 3-13, 5.34 in 44 games - 18 of them starts.

In 2018, he was 0-3, 7.71 in 4 starts, but did somewhat better as a reliever, with a record of 4-4 and a 4.30 ERA in 46 games. This made it clear to the team brass that, while on paper, it seemed Biagini had everything to succeed as a starter, in real life he just was not able to cut it in the role, and the damage his lack of success was having on his psyche also translated to his work in other roles. So, the whole idea of him starting was scrapped and he enjoyed a solid first four months for a struggling team in 2019. In 50 outings, all in relief, he was 3-1, 3.78 with a save and 10 holds as one of the main set-up men for closer Ken Giles. When the trading deadline arrived, it was widely expected that he would be dealt, as many teams were looking for bullpen help, but the deal that sent him away was puzzling, as he went to the Houston Astros, along with starter Aaron Sanchez, who was having a dreadful year, and minor leaguer Cal Stevenson, in return for outfielder Derek Fisher - a very meager return for the Jays. Still, he was likely to have an important role in the bullpen of a team looking to win a second World Series title in three years, so for him it was a good outcome. Both Sanchez and Biagini made their first appearance in an Astros uniform on the same day, August 3rd, and it was a memorable occasion, as Sanchez started things off with 6 hitless innings against the Seattle Mariners, then Will Harris, Biagini and Chris Devenski each followed with a hitless frame to complete a combined no-hitter. The Astros won the game handily, 9-0. The remainder of his Astro season was a struggle: in 13 appearances total, he posted a 7.36 ERA and 2.05 WHIP. He was not used in the postseason.