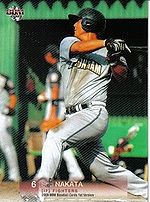 Sho Nakata was a highly-hyped prospect out of high school.

Nakata hit 87 home runs while in high school, a Japanese record. On November 3, 2006, during a prefectural tournament game, the 17-year-old cracked a 550' homer out of the park then over a couple houses before landing across the street. That shattered the old record for the park, 425' by future NPB regular Osamu Hamanaka. He also was timed at 94 mph as a pitcher in high school. The Minnesota Twins, New York Mets and Seattle Mariners all expressed interest, Seattle offering $2.5 million. Nakata turned them down to play in Nippon Pro Baseball.

The Nippon Ham Fighters won the lottery for the rights to Nakata, taking him with their first pick of the 2007 draft. He struggled in spring training in 2008 and was sent down to ni-gun for seasoning. He fared well, hitting .255/.339/.464 with 11 HR in 196 AB. He was five homers behind Eastern League leader Yohei Kaneko despite missing the last two months after knee surgery.

In 2009, Nakata starred in the minors, tying the Eastern League RBI record (95, previously set by Corey Paul) and setting a new homer record (30, held by Paul before). He got into 22 games for the big club, debuting on May 23 and singling off Ricky Barrett in his first at-bat in Nippon Pro Baseball. He was 10 for 36 with two doubles, three runs, one RBI, one walk and 15 whiffs for Nippon Ham.

Nakata was moved to the outfield in 2010 and again missing two months with knee surgery. He hit .233/.291/.395 with 9 HR but 61 K in 210 AB. His first NPB homer came off Yuta Omine on July 20. He got six votes for the 2010 Pacific League Rookie of the Year Award, well back of Ryo Sakakibara's 87. He also trailed Keisuke Katto, Masahiko Morifuku and Takashi Ogino.

As a regular in 2011, Nakata hit .237/.283/.408 with 32 doubles, 18 home runs and 91 RBI. In a low-offense season, he ranked among the Pacific League leaders in many departments. He was third in RBI (behind Takeya Nakamura and Hiroyuki Nakajima), second in doubles (to Kazuo Matsui), tied for third in homers (with Aarom Baldiris, trailing Nakamura by 30 and Nobuhiro Matsuda by 7), tied for 5th in total bases (215, even with Mitsutaka Goto), second in sacrifice flies (8, behind Nakajima), third in strikeouts (133, one behind co-leaders Chung-Shou Yang and Nakamura), tied for 6th in double play grounders (12, even with Baldiris) and 9th in slugging (between Goto and Atsunori Inaba).