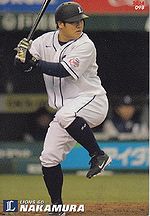 Takeya Nakamura was the second hefty third baseman named Nakamura to lead the Pacific League in home runs in a ten-year period, following Norihiro Nakamura. Takeya Nakamura has been known for an up-and-down career through 2008. His nickname, "Okawari-kun", means "another helping" and refers to his appetite.

Nakamura hit 83 homers in high school, 3 shy of Hiroyuki Oshima's Japanese high school record, tying Ken Suzuki for second place all-time. He was a second-round draft pick of the Seibu Lions. He spent 2002 in the minors. In 2003, he led the Eastern League in both homers (22) and strikeouts (97). Nakamura was 2 for 12 for the Seibu Lions in ichi-gun that year.

Nakamura hit .273/.351/.485 in 37 plate appearances and 28 games for Seibu in 2004 while Jose Fernandez held down the third base job for the Lions. Nakamura did not play in the 2004 Japan Series. In 2005, the 21-year-old took over the third base role from Fernandez and hit .262/.320/.603 with 22 homers in 237 AB. Had he qualified, he would have been 4th in the Pacific League in slugging behind Nobuhiko Matsunaka, Julio Zuleta and Alex Cabrera. Rookie of the Year honors went to Yasutomo Kubo instead.