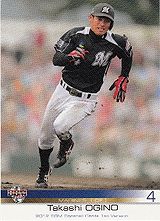 Takashi Ogino made his Nippon Pro Baseball debut in 2010.

Ogino played for Toyota Motors in the industrial leagues after college. He helped Japan win the 2009 Asian Championship then was picked in the first round by the Chiba Lotte Marines. He was the first player to be an Opening Day outfielder for Chiba Lotte in his pro debut in 25 years. He got his first hit that day, a single off Hideaki Wakui. Six days later, he tagged Tomoya Yagi for a 2-run jack, his first homer. After 46 games, he was hitting an impressive .326/.383/.417 with 25 steals in 28 tries and 29 runs in 46 games. In late May, he injured his knee while trying to steal; season-ending surgery followed suit. Despite missing most of the season, he was fourth in voting for the 2010 Pacific League Rookie of the Year Award, behind relief pitchers Ryo Sakakibara (Ogino's college teammate), Keisuke Katto and Masahiko Morifuku. Had he qualified, he would have ranked 5th in the 2010 Pacific League in average behind Tsuyoshi Nishioka, Kensuke Tanaka, Toshiaki Imae and Alex Cabrera. Despite missing about two-thirds of the season, he still was 6th in steals, trailing Yasuyuki Kataoka, Yuichi Honda, Kensuke Tanaka, Munenori Kawasaki and Yoshio Itoi; he led the Marines in swipes.