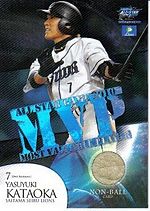 Yasuyuki Kataoka is an infielder for the Seibu Lions. He has led his league in steals twice.

Kataoka signed with the Tokyo Gas team in the industrial leagues out of high school. He was drafted in 2004 by the Seibu Lions, chosen in the third round. Yasuyuki saw significant playing time as a backup infielder as a rookie, appearing in 81 games and hitting .263/.298/.376. In 2006, he replaced Hiroyuki Takagi at second base and batted .292/.336/.394 with 28 steals in 37 tries. He had 33 sacrifice hits, one behind Pacific League leader Kensuke Tanaka and he was second to Tsuyoshi Nishioka in stolen bases.

Kataoka was a backup infielder for Samurai Japan when they won the 2009 World Baseball Classic. He was 4 for 13 with four steals in five tries to tie Jimmy Rollins for the Classic lead in swipes. His 3rd-inning single off Cuba's Aroldis Chapman loaded the bases and knocked the hard-throwing southpaw from the game as Japan went on to win. He scored the 2nd run in Japan's 5-3 finals win over South Korea, with a single off Hyun-wook Jong, a steal and a hit by Hiroyuki Nakajima, Kataoka's middle infield teammate on Seibu.