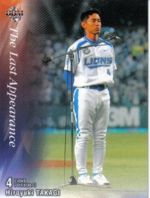 Hiroyuki Takagi spent 14 seasons with the Seibu Lions; he was known as a good defensive player. He was a long-time infield mate of Taisei Takagi (no relation).