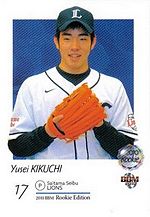 Yusei Kikuchi drew notice in 2009 when he was timed at 96 mph during the Koshien Tournament, a new record for a left-hander since the event began using the radar gun in 1980. He met with 8 major league teams and all 12 Nippon Pro Baseball clubs that winter, then decided to remain in Japan to begin his professional career. Six of the 12 NPB clubs named him #1 overall in the draft that year; the Seibu Lions won his rights. He debuted with the big club on June 12, 2011 with a rocky outing against the Hanshin Tigers (6 H, 4 ER in 2 1/3 IP). For the year, he went 4-1 with a 4.14 ERA for Seibu.

On November 5, 2018, Seibu announced its intention to place him on the posting system, with the 30-day period starting a month later, on December 5th. Late on December 31st, it was reported that he had agreed to a four-year deal with the Seattle Mariners. The Mariners had been proceeding with a fire sale during the off-season, trading away pricey veterans, but Kikuchi was seen as one of the younger players around whom the team planned to build for the future. They had of course a long history of having Japanese players be successful for them. A couple of days later, figures were released for the deal: it was worth $56 million for four years with a club option to extend it to seven years for a total of $109 million. This included a signing bonus of $6 million. As a result, the posting fee to be paid to Seibu by Seattle amounted to $10.275 million. On March 21, 2019, he became the first Japanese player to make his major league debut in Japan when he started the second contest of a season-opening two-game series against the Oakland Athletics at the Tokyo Dome. He gave up 1 run on 4 hits in 4 2/3 innings before giving way to Roenis Elias. The Mariners then indicated that they had devised a special plan to keep Kikuchi's innings down his first season: every fifth start or so, he would only the team's "opener", turning the ball over to a young pitcher called up from the minors after pitching the 1st inning. After struggling to a 5.56 ERA by mid-August, he had a tremendous outing on August 18th, when he pitched the first complete game and shutout of his career in defeating the Toronto Blue Jays, 7-0, on a two-hitter. He ended his rookie season at 6-11, 5.46 in 32 games, pitching 161 2/3 innings.

In 2021, he was limited to 9 starts by the shortened season resulting from the COVID-19 pandemic. He lowered his ERA slightly, to 5.17 and his record was 2-4. One major improvement was in his strikeout rate, which rose from 116 in 161 2/3 innings, to 47 in 47 innings; his hit rate also improved significantly, from 10.9 per 9 innings to 7.9. On April 29, 2021, he flirted with a no-hitter in a start against the Houston Astros. He did not allow a hit until one out in the 7th, then completed the frame without further damage before leaving, on his way to a 1-0 win.