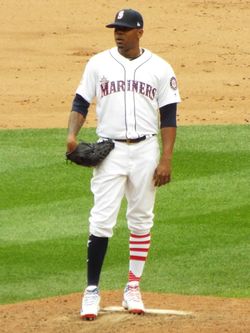 Roenis Elias came to the majors in 2014.

Elias split the summer of 2011 between the Pulaski Mariners (1-0, 0.82 in 3 G), AZL Mariners (0 R in 1 IP) and Clinton Lumber Kings (4-2, 5.45 in 7 G). In 2012, he improved to 11-6, 3.76 for the High Desert Mavericks. He was 4th in the California League in ERA (behind Matt Andriese, Josh Bowman and Christian Bergman), third in wins (behind Bergman and Taylor Rogers), 8th in strikeouts (128, between Andriese and Bowman), led in WHIP (.21 over Burch Smith) and led in balks (8, double runner-ups Bryant George and Jack Snodgrass). Among Mariners farmhands, he led in wins (one over Cam Hobson), was 4th in strikeouts and led in balks. He tied David Goforth and Daniel Rosenbaum for the most balks in the minor leagues. He joined Andriese and Bergman as the California League's All-Star starting pitchers. He had the third-lowest ERA in Mavericks franchise history among pitchers with 25+ starts, trailing John Patterson and Brad Penny. That winter, he was 0-2 with a 4.74 ERA for the Venezuelan League's Cardenales de Lara.

In 2013, Elias had a 6-11, 3.18 record for the Jackson Generals with 121 strikeouts and 50 walks in 130 innings while more than halving his balk total to 3. He was 4th in the Mariners chain in strikeouts (behind Taijuan Walker, James Paxton and Stephen Landazuri) and tied Hobson and Paxton for the most losses. In the Southern League, he tied Chris Reed and Scott Snodgress for 4th in defeats, placed 7th in ERA (between Andrew Chafin and Alberto Cabrera) and tied Aaron Northcraft for 7th in strikeouts. He had a 2-1, 4.26 winter for Lara.

Roenis beat out Blake Beavan and Randy Wolf for a roster spot with the Mariners ath the start of 2014. In his major league debut on April 3rd, he turned in a very solid outing. He opened with a walk to Coco Crisp and walked Jed Lowrie later in the 1st inning, but escaped further harm. He did not allow a hit until two outs in the 5th when Nick Punto singled. Sam Fuld tripled but was out trying to turn the hit into a homer. Yoervis Medina relieved Elias in the 6th. He left with a 2-1 lead over the Oakland A's but Oakland rallied to win in extra innings. He recorded his first big league win on April 14th, when the Mariners defeated the Texas Rangers, 7-1, as he allowed only 1 run in 6 2/3 innings. On June 1st, he pitched the first complete game of his career in shutting out the Detroit Tigers, 4-0, on a three-hitter. He was the first rookie pitcher to record a shutout for the Mariners since Freddy Garcia in 1999. He finished the year at 10-12, 3.85 in 29 starts, logging 163 2/3 innings and striking out 143 batters.

2015 was a bit harder for Roenis, as his record was only 5-8, his ERA rose to 4.14 and he was limited to 20 starts in 22 appearances, pitching 115 1/3 innings at the major league level. He also spent time back in the minors with the Tacoma Rainiers of the Pacific Coast League, where he went 4-2 in 7 starts, but with a bloated 7.34 ERA. On December 7th, he was traded to the Boston Red Sox along with reliever Carson Smith in return for Ps Wade Miley and Jonathan Aro, and it was not clear what his role would be in Boston. Indeed, he only pitched in four games for the Red Sox and was traded back to the Mariners on April 23, 2018 for a player to be named later