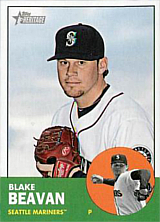 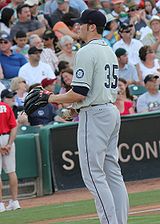 Pitcher Blake Beavan was the ace for the United States in the 2006 World Junior Championship, going 2-1 with a 0.00 ERA. In the quarterfinals, he struck out 11 Cubans in a shutout win. He was selected by the Texas Rangers in the first round of the 2007 amateur draft, signed by scout Jay Eddings for $1,497,500 and made his pro debut the following year with the Clinton LumberKings. On July 9, 2010, he was traded by the Rangers, with Matthew Lawson, Josh Lueke and Justin Smoak, to the Seattle Mariners for Cliff Lee, Mark Lowe and cash.

Blake made his major league debut with the Seattle Mariners on July 3, 2011; he was called up to replace the injured Erik Bedard. Facing the San Diego Padres, he pitched 7 innings, surrendered three hits, two walks and one earned run while striking out four batters. Earning the win, he became the first Mariner pitcher to win his major league debut since Travis Blackley in 2004 and the first M's pitcher to pitch at least seven innings in his debut since Jim Converse in 1993. Beavan's peak big league season was 2012, when he was 11-11, 4.43 with only 67 strikeouts in 152 1/3 innings. The following season he imploded in 12 games (6.13 ERA in 39 2/3 innings) and made one final start in 2014 before bouncing around the minor leagues. Since 2019, he has worked as a youth baseball coach.