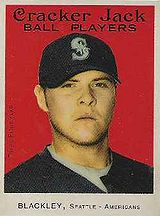 The brother of Adam Blackley, Travis Blackley made his major league debut at age 21.

Blackley was 0-1 with a 2.53 ERA in the 2000 World Junior Championship. He was signed out of Australia by scout Jim Colborn for the Seattle Mariners in October 2000. He made his pro debut the next summer with the Everett AquaSox and his big league debut in 2004 with the M's. He pitched for the Australian national team in the 2007 Baseball World Cup, going 0-1 with a 1.64 ERA. He was third on the staff in ERA behind Dushan Ruzic and brother Adam. He threw five shutout innings against the Dutch national team but allowed two runs in the sixth and was relieved. He allowed only one run in his start against the Japanese national team but Australia was shut out by Tadashi Settsu. The Philadelphia Phillies took him with the 15th pick of the 2007 Rule V Draft. In the 2009 WBC, Blackley got a key start against the Cuban national team and did a great job. He allowed a third-inning run when Luis Miguel Navas singled, was bunted over and came in on a hit by Frederich Cepeda. It was the only run he gave up in 5 2/3 innings against Cuba as he battled Aroldis Chapman evenly; his bullpen gave up 4 runs in 3 1/3 innings, though, and Cuba went on to win 5-4.

Blackley signed with the KBO's KIA Tigers for 2011. Debuting on April 3, he was roughed up for four runs in five innings. He went five years between stints in the major leagues before resurfacing with the San Francisco Giants and Oakland Athletics in 2012, having last played in the bigs in 2007, also with the Giants. In the interim, he pitched all over the world - including in the United States, Mexico, Australia and South Korea. In the finale of the 2017 WBC Qualifiers, held in February 2016, the veteran got the start against South Africa. He allowed a leadoff homer to Gift Ngoepe then pitched 5 shutout innings before giving up a three-run homer to Kyle Botha in the 6th; Peter Moylan relieved him with a 4-3 deficit but Australia rallied to win a spot in the 2017 WBC. He then was 8-8 with a 3.92 ERA for the 2016 Pericos de Puebla but dazzled in the postseason, capped by a two-hit, two-walk gem over eight scoreless frames in the title clincher to give Puebla their first Mexican League pennant in 53 years. He was named playoff MVP.