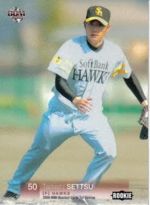 Tadashi Settsu was one of the top performers in the 2007 Baseball World Cup. It was the international debut for the right-hander, who pitched for JR East in the industrial leagues. He went 4-0 with a 0.31 ERA. In 28 1/3 innings, he allowed just 11 hits and one run while fanning 36. Settsu beat the South African national team in his first game on November 7; in the first inning, he gave up his lone score of the event. On November 11, he tossed 8 shutout innings, allowing 3 hits, in a win over Panama, the Bronze Medal winner in 2005. Along with Hasebe Kohhei, he shut out Travis Blackley and Australia in the quarterfinals. He came back on one day rest on November 18 and allowed one hit and no runs in 7 innings against the Dutch national team to win the Bronze Medal Game. He led the Cup in wins (no one else had more than 2), had the second-lowest ERA of anyone to work 10+ innings (behind Kenny Berkenbosch's 0.00) and led in strikeouts (15 more than En-Yu Lin). He was far more dominant than any of the 15+ pitchers who had played or would play in the major leagues. Settsu was the clear choice as the top right-handed pitcher in the event, though he failed to take home Baseball World Cup MVP honors; those went to Jayson Nix.

With an overhand delivery Settsu throws a solid screwball, slider, curveball and an 86-88 mph four-seam fastball (tops out at 92 mph).