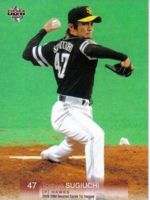 Raised by a single mother, Toshiya Sugiuchi struck out 16 in a no-hitter on his mother's birthday during the 1998 summer Koshien before losing to Daisuke Matsuzaka in the next outing. Out of high school, Sugiuchi pitched for Mitsubishi Heavy Industries Nagasaki in the industrial leagues. He pitched for Japan in the 2000 Olympics, holding Cuba scoreless for five; in his second outing, he threw two scoreless relief innings against the USA before serving up a game-losing homer. He took his team to the industrial league title his last year there and then was picked by the Daiei Hawks in the third round of the 2001 NPB draft. In the 2001 Asian Championship, he helped Japan win a Bronze Medal.

In '04, Sugiuchi fell to 2-3, 6.90, missing significant time after breaking both pinkies after pounding his hands on a table after a rough outing. In 2005, Toshiya came out of nowhere for a 18-4, 2.11 season with 218 K and 43 walks in 196 2/3 IP. He led the PL in wins and ERA, became the first left-hander to win the Sawamura Award in Pacific League history, became the first Hawks pitcher since Tadashi Sugiura to fan 200, won the PL MVP award and was named to the Best Nine. He was 8 strikeouts behind Matsuzaka in his bid for a pitching Triple Crown.

Sugiuchi was 15-6 with a 2.46 ERA in 2007. He was 5th in the Pacific League in ERA, third in innings (197 2/3), tied with Yu Darvish for third in wins (behind Yoshihisa Naruse and Hideaki Wakui), tied with Darvish for second in shutouts (3, one behind Naruse), tied with Hiroyuki Kobayashi for 5th in complete games (5) and 3rd in strikeouts (187, behind Darvish and Masahiro Tanaka).

In the 2008 Olympics, Sugiuchi was 1-0 with a 0.84 ERA to repeat his success from the 2000 Games. He got the victory over the Dutch national team. Against eventual Gold Medal winner South Korea in the semifinals, he tossed 3 shutout innings before allowing an error-aided run. Kenshin Kawakami relieved him and Japan went on to lose in the 8th.

During the 2008 season, the southpaw was 10-8 with a 2.66 ERA, a good record for a last-place Hawks team. He was again 5th in the league in ERA and his 8 complete games were second to Darvish. He fanned 213 in 196 innings, leading the circuit in Ks, beating out Darvish.

Sugiuchi was one of Japan's best pitchers when they won the 2009 World Baseball Classic. He made five appearances to tie Takahiro Mahara and Darvish for the team lead and tossed 6 1/3 hitless, scoreless innings, walking two and fanning six. Only Pedro Martinez had a better WHIP for hurlers with 5+ innings in the Classic. He tossed three perfect innings of relief in Japan's make-or-break win over the Cuban national team after relieving Hisashi Iwakuma to complete a 5-0 shutout. This clinched the outcome that Cuba would have its worst finish in over 80 years of international baseball competitions.

Sugiuchi was the interleague MVP for NPB in 2009.

He throws a fastball in the mid to high 80s (tops out at 92 mph), a solid slider, and a changeup described as "killer" by Japanese baseball commentator Gary Garland.

Sugiuchi's wife Erika used to be an announcer for the Hawks; Erika's sister also married a Hawks pitcher, Nagisa Arakaki, making him Sugiuchi's brother-in-law. His hobbies are fishing and golf.