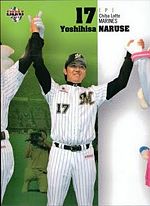 Yoshihisa Naruse had the best ERA in Nippon Pro Baseball in 2007.

Naruse was a surprise starter for game two of the 2007 Asian Championship, replacing Darvish, the previously announced starter; both teams broke their gentleman's agreement not to change the announced rotation. He had an unimpressive outing in a 4-3 win over South Korea. Young-min Ko homered off of Naruse in the first and in the 4th, Taek-keun Lee doubled in another. Naruse was promptly yanked in favor of Kenshin Kawakami, who would get the win.

Naruse set NPB All-Star Game records for most hits allowed (11) and runs allowed (8) in the second All-Star Game of 2008, taking a beating from Central League hitters. A few weeks later, he was in the 2008 Olympics and did excellently, allowing no runs in 12 innings, allowing only 5 hits and 3 walks while striking out 19. Naruse allowed just 2 hits and fanned 7 in a 1-0 win over Team Canada, which was loaded with former major leaguers and top prospects. He did allow two inherited runners to score in the 4-2 loss to Cuba, allowing a single to Alfredo Despaigne to plate the two runners left behind by Yu Darvish; Darvish took the loss while Naruse settled down from there and again outperformed his more famous PL counterpart. His 13 strikeouts in the round-robin were one behind leader Chris Begg.