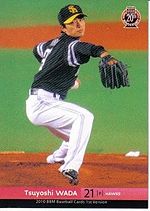 Tsuyoshi Wada had one of the finest college careers of any pitcher in Japanese history. He went 23-11 in college with an ERA under 2.00 and set a Tokyo Big Six University League record with 476 career strikeouts, destroying the record held by Hall-of-Famer Suguru Egawa. He once pitched 52 1/3 consecutive scoreless innings in college. In a 2000 All-Star series against top American college players, he threw three scoreless innings. In his last game, he lost in the finals of the top college tournament to Hiroshi Kisanuki. In the 2001 Asian Championship, Wada helped Japan take the Bronze Medal.

In the 2002 World University Championship, Wada went 1-1 with a 1.20 ERA, allowing 6 hits in 15 innings and striking out 17. His only loss came against the USA in the semifinals, 2-1. Wada made the All-Tournament team as the top left-handed pitcher.

Wada was picked by the Daiei Hawks in the first round of the 2003 NPB draft. As a rookie, he went 14-5 with a 3.38 ERA and 195 K in 189 IP. He was second in the Pacific League in strikeouts, 20 behind Daisuke Matsuzaka, was tied for sixth in wins, second to Hisashi Iwakuma with nine complete games, tied Toshiya Sugiuchi and Matsuzaka for the shutout lead (2) and was tied with Sugiuchi for 4th in ERA. He claimed PL Rookie of the Year honors and made the All-Star team. In the 2003 Japan Series, he went 1-0 with a 1.80 ERA and pitched a complete-game victory in game seven to beat the Hanshin Tigers. He pitched for Japan in the 2003 Asian Championship, where they won Gold.

Representing Japan in the 2006 World Baseball Classic, the southpaw pitched two scoreless innings, allowing one hit and one strikeout. In 2006, he was 14-5 with a 2.98 ERA. He finished 8th in the PL in ERA (between Yu Darvish and Nagisa Arakaki), third in wins (behind Kazumi Saitoh and Daisuke Matsuzaka), tied for third in shutouts (3, even with Tomoya Yagi) and tied Hideaki Wakui for 7th in strikeouts (137).

Wada had a 4.82 ERA in two starts in the 2008 Olympics but struck out 13 in 9 1/3 IP. The problem was that he allowed 3 home runs, more than all all the other Japanese hurlers combined. He tossed six shutout innings in the first game against the South Korean national team before a 2-run homer by Dae-ho Lee; he left with a tie game but Hitoki Iwase blew it for a loss. Given the start against Team USA in the Bronze Medal game, he struggled, allowing a solo homer to Matt LaPorta and a 3-run shot to Matthew Brown to leave with a 4-4 deficit in an eventual 8-4 defeat. For the 2008 season, Wada had a 8-8, 3.61 record with only 36 walks in 162 innings. He was 9th in strikeouts (123) but not among the leaders in much else.

Wada began 2009 with a 14-strikeout shutout on Opening Day. He tied a Nippon Pro Baseball record for opening day whiffs. He was sidelined by elbow inflammation for most of the year, though, and finished 4-5 with a 4.06 ERA.

He had another outstanding season in 2011, going 16-5 with a 1.53 ERA for Fukuoka. He finished third in the PL in ERA (behind Tanaka and Darvish), 4th in innings (184 2/3, between Yoshihisa Naruse and Wakui), 4th in wins (behind Tanaka, D.J. Houlton and Darvish), tied for 7th in shutouts (2), tied for 9th in complete games (4),4th in strikeouts (168, between Sugiuchi and Naruse), 5th in opponent average (.219, between Houlton and Shinya Nakayama) and tied for 5th in WHIP (1.00, even with Sugiuchi). In voting for the 2011 Pacific League Most Valuable Player Award, he placed 5th behind Seiichi Uchikawa, Tanaka, Takeya Nakamura and Yuichi Honda, second to Tanaka among pitchers. In the 2011 Japan Series, he allowed one run in eight innings and fanned 8 in the opener but got a no-decision against the Chunichi Dragons as Wei-Lin Chen was also dominant. He started game six with a chance to clinch it but lost a 2-1 duel to Kazuki Yoshimi. Both runs came in the first on a single by Masahiro Araki, walk to Tony Blanco and 2-run triple by Kazuhiro Wada.

On December 14, 2011, the Baltimore Orioles announced that they had signed Wada to a two-year deal worth $8.15 million, with an option for a third year. He joined the Norfolk Tides in 2012 but made only one appearance, in which he allowed 6 runs in 2 2/3 innings, before undergoing Tommy John surgery. In 2013, he was back at Norfolk and went 5-6, 4.03 in 19 starts, logging 102 2/3 innings. He moved to the Chicago Cubs organization in 2014, starting the year with the Iowa Cubs of the Pacific Coast League. He was 9-5, 2.66 after 17 appearances when he received the belated call to the Show, following the Cubs' trade of two of their top starting pitchers, Jeff Samardzija and Jason Hammel, to the Oakland A's. In his debut against the Cincinnati Reds on July 8th, he allowed only an unearned run in 5 innings but was not involved in the decision. He finally earned his first big league victory on July 28th when he pitched 7 strong innings as the Cubs defeated the Colorado Rockies, 4-1. On August 21st, he earned his third win of the year in the first game to be protested successfully in 28 years. He had pitched 5 scoreless innings and was leading 2-0 over the San Francisco Giants when a downpour drenched Wrigley Field in the middle of the 5th inning on August 19th; the grounds crew had trouble deploying the tarpaulin to protect the infield and when the rain stopped, the field had become unplayable. The umpires initially called the game at that point, awarding Wada a complete game, rain-shortened shutout win. However, the Giants filed a protest which was upheld by Major League Baseball, forcing the game to be resumed two days later from the point where it had been stopped. The Giants managed to score a run in the remaining innings, but the Cubs held on for a 2-1 victory, re-crediting Wada with the win if not the shutout or the complete game. He ended the season with a record of 4-4, 3.25 in 13 starts, making him one of a number of promising players to make their debut for the Cubs that year, although at 33, he was by far the oldest of the group.

Wada throws a fastball in the mid to high-80s (tops out at 91 mph), a forkball, a change-up and a solid slider. He tracks scouting reports on a laptop he always carries with him.