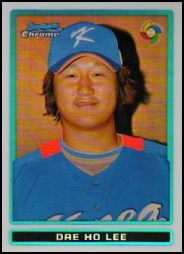 Dae-ho Lee was the second and third Triple Crown winner in the history of the Korea Baseball Organization and won an MVP Award, then went to Nippon Pro Baseball, where he won a RBI title and a Japan Series MVP.

Lee had a rough childhood. His father died when he was three. Lee's mother remarried and he was raised by his poor grandmother, who passed away while he was in second grade. He focused his energies on baseball and starred in the 2000 World Junior Championships, hitting .500/?/.967. Only Joe Mauer hit for a higher average; Mauer beat him out for the tourney All-Star spot at first base. Lee's 3 homers possibly tied for the tourney lead as well. South Korea won the event, but teammate Shin-soo Choo got the MVP instead. Lee was picked up by the Lotte Giants as a pitcher.

"Big Boy" emerged as a superstar in 2006. he hit .336/~.410/.571 with 26 HR and 88 RBI to win the Triple Crown. The last player to have done so was Man-soo Lee in 1984. Dae-ho Lee failed to win the MVP award, finishing second to Hyun-jin Ryu in voting for the MVP. He did win a Gold Glove as well (for the best overall player, not just the best defensive player at the position). He helped South Korea to Bronze in the 2006 Asian Games.

In 2007, Lee said he did not plan on resting his laurels, feeling a need to compete with friends Tae-gyun Kim and Seung-yeop Lee in terms of performance at the plate. Dae-ho Lee held up Seung-yeop Lee as his role model both in terms of playing baseball and avoiding scandal. Lee set a record for KBO All-Star Game votes that year with 341,244. Lee hit .335/.453/.600 in 2007. He was third in the KBO in average and OBP, led in slugging and tied Cliff Brumbaugh for second in homers (29) and RBI (87), trailing Jung-soo Shim. He won his second straight Gold Glove.

Lee was 0 for 6 with two walks and three strikeouts in the 2007 Asian Championship. Lee hit .393/.414/.500 with 3 doubles and 8 RBI in the 2008 Final Olympic Qualification Tournament, splitting time between first base, DH and third, having to fill the latter spot after Dong-joo Kim left due to his mother's illness. He tied Jesus Cota for 10th in average. He tied Luke Hughes, Matt Rogelstad, Jimmy Van Ostrand and Kuo-Hui Lo for second in RBI, trailing Seung-yeop Lee. South Korea earned a spot in the 2008 Olympics with their 6-1 record in the event.

Lee was MVP of the 2008 KBO All-Star Game, getting 4 hits including a home run.

"Big Boy" was South Korea's top hitter in the 2008 Olympics, when they won Gold and went unbeaten in 9 contests. Lee hit .360/.515/.760 with 7 walks, 3 homers and 10 RBI, being used mostly at DH. Dae-ho's 2-run homer off Tsuyoshi Wada in the 7th inning was Korea's first blow against Japan in a 5-3 win. He also hit a 2-run homer against Brandon Knight in a one-run win over Team USA and another 2-run shot in a rout of the Dutch national team. Entering the Medal round, Lee was 4th in the 2008 Olympics in average (.429, behind Alexei Bell, Yong-kyu Lee and Tsuyoshi Nishioka), 2nd in slugging (.905, behind Bell), led in home runs (3) and was second in RBI (10, one behind Alfredo Despaigne).

Lee was a 3B, DH and PH for South Korea in the 2009 World Baseball Classic, when they finished second. He hit .278/.440/.389. In the championship game, he delivered a pinch-hit 8th-inning sacrifice fly off Hisashi Iwakuma to score Bum-ho Lee and make it 3-2; South Korea tied it in the 9th only to lose in the 10th. In the 2009 KBO season, he hit .293/.377/.531 with 28 home runs and 100 RBI. He finished 8th in slugging, 4th in home runs (behind Sang-hyeon Kim, Hee-seop Choi and Karim Garcia) and tied for third in RBI (with Choi and Roberto Petagine), trailing Sang-hyeon Kim and Hyun-soo Kim). Hee-seop Choi beat him out for the Gold Glove award at first base.

His stellar career in KBO made him an intriguing international signee as he became a free agent. He wound up signing with the Orix Buffaloes in Japan for 2012. He started at cleanup and first base on Opening Day and got a hit off Tadashi Settsu. His first home run in NPB did not come for nearly three weeks before he took Masaru Takeda deep. He made the Pacific League All-Star team and was 2 for 7 with a double and a RBI in the 2012 NPB All-Star Games. He hit .286/.368/.478 with 24 home runs and 91 RBI. In a low-offense season, he was among the Pacific League leaders in numerous departments. He led in OPS (13 points over Hiroyuki Nakajima), RBI (12 over Takeya Nakamura) and total bases (251, 21 more than Nakamura). He also was 10th in average (between Dai-Kang Yang and Ginji Akaminai), 4th in OBP (between Takumi Kuriyama and [[Katsuya Kakunaka]), 2nd in slugging (.012 behind Wily Mo Pena), tied [{Sho Nakata]] and Shunichi Nemoto for 9th in doubles (25), tied Nakata for second in home runs (3 behind Nakamura) and was 3rd in walks (64, behind Saburo Omura and Yoshio Itoi). He made the Best Nine at 1B in the PL, winning honors as tops at his position in his league for the fifth time in seven years.

Lee was 5 for 11 with two walks, two runs and two RBI in the 2013 World Baseball Classic but South Korea was eliminated in the first round, much quicker than in the prior Classics. He started all two of three 2013 NPB All-Star Games at first for the PL, going 1 for 5, his hit coming off Kenta Maeda. He remained steady at the plate, though his numbers were lower in context as offensive numbers in Japan picked up. He hit .303/.384/.493 with 27 doubles, 24 home runs, 91 RBI and 64 walks in 2013. He was on the PL leaderboard in average (9th, between Nakata and Itoi), doubles (tied for 8th with Yang), home runs (6th, between Andruw Jones and Tadahito Iguchi), RBI (tied for 6th with Aarom Baldiris), walks (8th, between Itoi and Hideto Asamura), OBP (tied for 8th with Itoi), slugging (7th, between Michel Abreu and Yuki Yanagita), OPS (6th, between Casey McGehee and Abreu) and total bases (257, 6th, between Nobuhiro Matsuda and Abreu). He did not make the Best Nine as Asamura was picked instead.

The Busan native moved to the Softbank Hawks as a free agent but saw his power numbers fall in 2014 as he hit .300/.362/.454 with 30 doubles and 19 home runs. He also was being used more at DH and less at 1B, where Akira Nakamura was seeing increased action. He started for the PL in both 2014 NPB All-Star Games but went 0 for 4 and was replaced by Akaminai at first both games. He finished among the PL league leaders in average (6th, between Seiichi Uchikawa and Yuya Hasegawa), doubles (tied for 5th with Hasegawa), home runs (tied for 8th with Itoi), slugging (8th, between Nakata and Yanagita) and total bases (257, 2nd, 6 behind Itoi). In the 2014 Japan Series, he did well, batting .333/.316/.500 with a team-high four RBI in five games as Softbank topped the Hanshin Tigers. He hit a long home run off Atsushi Nomi in a 2-1 game 2 win and had 3 hits in game 3.

In 2015, Lee saw his average drop but his home run numbers rise to give him a better OPS. He hit .282/.368/.524 for the Hawks with 30 doubles, 31 home runs and 98 RBI, while continuing to play more DH and less time in the field. He did not make the All-Star team for his first time in NPB but did finish among the PL leaders in doubles (8th), home runs (5th), RBI (3rd, between Yanagita and Brandon Laird), runs (68, tied for 8th with Haruki Nishikawa and Kensuke Kondo), walks (62, 10th), OBP (7th, between Akira Nakamura and Nishikawa), slugging (4th, between Matsuda and Shogo Akiyama), OPS (4th, between Takeya Nakamura and Ikuhiro Kiyota) and total bases (267, 5th, between Matsuda and Nakata). He would win Best Nine honors at DH. He was then huge in the 2015 Japan Series, hitting .500/.619/1.000 with 8 RBI in 5 games as Softbank beat the Yakult Swallows and became the first repeat Japan Series champions in 23 years. He had 3 hits in the opener, a two-run homer off Yasuhiro Ogawa to break open game 2, drove in four of their six runs in game 4 to tie Kenji Johjima's Hawks franchise record for RBI in a Japan Series game and hit a two-run bomb off Masanori Ishikawa for the winning hit in Game 5. He was the first foreigner to win Japan Series MVP since Troy Neel in 1996. After the Series, he expressed his intention to sign with a club in MLB.

Lee then joined South Korea for the 2015 Premier 12, hitting .222/.343/.333 with 7 RBI out of the heart of the order for the tournament champions. He came up big in the semifinals, though. With South Korea down 3-2 against unbeaten Japan, he hit a two-run single off Hirotoshi Masui for the game-winner in the 9th. He was named to the All-World team at DH.

Now a free agent, Lee was able to pursue his dream to give Major League Baseball a try. He did not have to go through the posting system, making him more affordable to teams, although his age meant that he was unable to secure a guaranteed major league contract. He did find a taker on February 3rd when he signed a minor league contract with the Seattle Mariners coupled with an invitation to spring training. He made the team and debuted in the majors on Opening Day, April 4th batting for Leonys Martin and fanning against Cole Hamels of the Texas Rangers. On April 13th, pinch-hitting for 1B Adam Lind, he took Rangers reliever Jake Diekman deep with two outs and Kyle Seager on base in the 10th inning for a walk-off homer in a 4-2 Mariners win. It was his second career homer, his first having come on April 8th against Eric Surkamp of the Oakland Athletics.