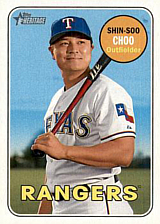 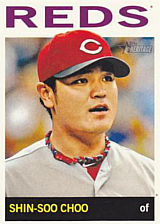 Shin-Soo Choo is the most prolific South Korean position player in big league history, belting 218 home runs while routinely getting on base in a sixteen season career. He logged a .423 OBP in 154 games with the Cincinnati Reds in 2013, earning a 2018 All-Star nod with the Texas Rangers.

Choo was named MVP and Best Pitcher in the 1999 and 2000 President's Cup, a Korean high school tournament. He was a member of the Korean Junior National Team which won a gold medal at the 2000 Junior World Championship; he was the All-Star left-handed pitcher and MVP of the event (2-0, 3.48, 33 strikeouts in 21 innings) and got the win in the Gold Medal Game while also getting two hits to beat the US. Choo was signed out of Korea by scouts Jae Lee and Jim Colborn for the Seattle Mariners in August 2000. He worked his way up the Mariners minor league organization, hitting mostly over .300 with moderate power. He was a minor league All-Star in 2001, 2002, and 2004, and in 2002 was the Mariners Minor League Player of the Year. He had a cup of coffee in the majors in 2005, and was also brought up briefly in 2006 when Jeremy Reed was injured. As a player on the AAA Tacoma Rainiers, he had with an average over .320 and slugging of approximately .500.

Choo was traded to the Cleveland Indians organization on July 25, 2006 for Ben Broussard in a deal the Mariners would come to deeply regret. In his first seven games with the Indians, he was hitting .440, cooling down to hit .295/.373/.473 in 49 games with the Tribe. In 2007, he appeared in 58 games with the Buffalo Bisons and 6 with the Indians, batting .294 with 5 RBI. In 2008, Choo finally hit his stride. Playing in left and right field in the majors, he amassed 28 doubles and 16 home runs in 317 at bats, finishing with a line of .309/.397/.549, all three of them the best on the Indians. Though he played sporadically at first, he gradually worked his way into the lineup, appearing at both outfield corners and hitting fifth. His power, batting eye, and outfield versatility made him one of Cleveland's bright young stars, and the best Korean-born hitter in the major leagues.

Choo was the main DH for South Korea in the 2009 WBC, usually hitting 5th behind Hyun-soo Kim and Tae-kyun Kim. The lone active major leaguer on the runner-up team, he hit .188/.409/.563 with 5 runs scored and 4 RBI in 7 games; two of his 3 hits were home runs. He hit a 3-run homer off Carlos Silva in the semifinal win over Venezuela and a solo shot against Hisashi Iwakuma in the 5-3 finale loss to Japan. With the Indians in 2009, he picked up where he left off the previous season, spending the entire season as a regular and as one of the team's best hitters, playing mostly right field. On July 3, he belted 2 home runs with 7 RBI, scoring 4 times in a 15-3 demolition of the Oakland A's. He hit .300/.394/.489 with 20 home runs and 38 doubles, while scoring 87 runs and driving in 86 in 156 games. Choo was the right fielder for South Korea when they won Gold at the 2010 Asian Games; the Korean government had promised military service exemption if the team won Gold, meaning that Choo would not miss any major league time to military service. On September 17, Choo took the Kansas City Royals downtown three times, driving in 7 runs with 3 runs scored in an 11-4 victory. His statistics in the majors in 2010 were virtually the same as the previous year's: a .300/.401/.484 batting line in 144 games, with 22 homers and 90 RBI.

On May 2, 2011, Choo was arrested in Sheffield Lake, OH on suspicion of driving under the influence. He was already the sixth major leaguer caught in such circumstances since the start of spring training, prompting calls from fellow players to start meting out penalties to future players guilty of such conduct. The arrest affected him, and he struggled at the plate in the season's early months, hitting only .244 through late June. He explained that the source of the problem was "between the ears" as he let criticism for his off-field behavior affect his on-field performance. His trying season took a turn for the worse on June 24th when he was hit by a Jonathan Sanchez fastball on his left thumb, putting him on the disabled list. Choo later explained that a lot of his struggles that year were a result of being the sole Korean position player in the major leagues and the star of his country's national team, putting additional pressure on his shoulders. He added that he had received counseling to help him deal with the condition, and he hit much better after returning from the disabled list. He finished the 2011 season with his worst statistics yet since becoming a starter, a batting line of .259/.344/.390 with 8 homers and 36 RBI. His season ended due to injury in September, a few weeks after he connected for his first walk off home run against his old buddies, the Mariners, on August 23rd.

Choo had a bounce-back year in 2012, playing 155 games with a batting line of .283/.373/.441, with 43 doubles, 16 homers, 88 runs scored and 67 RBI. His homers and RBI totals were relatively low as he moved to the lead-off spot at mid-year and changed his approach at the plate to some extent. After the season, he was traded to the Cincinnati Reds on December 11th, along with Jason Donald, in return for Drew Stubbs and Didi Gregorius, with the Reds expected to keep him in the lead-off role. Indeed, he got off to an exceptional start in that role for the Reds in 2013, as after 18 games, he was leading the National League with 26 hits and had a tremendous .523 on-base percentage thanks to 11 walks and a whopping 9 hit-by-pitches. He had also scored 17 runs and managed 10 extra-base hits, for an OPS+ of 209. He slumped in June. costing him an opportunity to play in the 2013 All-Star Game, but came right back in July to register the longest hitting streak of his career at 15 games. On September 23rd, he got the hit that sent the Reds to the postseason, a 10th-inning single off Sean Henn of the New York Mets that drove in Devin Mesoraco for a 3-2 win. He finished the season with a batting line of .285/.423/.462, with 34 doubles, 21 homers, 107 runs scored, 112 walks and a league-leading 26 hit-by-pitch. He played in the postseason for the first time of his career, going 1 for 3 with a homer, an RBI and 2 runs scored in the Wild Card Game, although his efforts were in vain as the Reds lost, 6-2, to the Pittsburgh Pirates.

Choo became a highly-sought free agent after the season, and on December 21 signed a seven-year deal with the Texas Rangers worth $130 million to become their new lead-off hitter. The first year of the deal, 2014, turned out to be disastrous for the Rangers, who were never in contention because they were racked by injuries, and disappointing for Shin-Soo. He played 123 games, battling an ankle injury, and saw his batting line fall to .242/.340/.374, with 58 runs scored, 13 homers and only 3 stolen bases. His OPS+ was just at the league average of 100. On August 24th, the Rangers announced he would not play again after surgery to remove a bone spur from his left elbow. On July 21, 2015, Choo hit for the cycle in a 9-0 win over the Colorado Rockies. He doubled in the 2nd, homered on the 4th, singled in the 5th, then in the 9th, against Rex Brothers, drove a ball over center fielder Charlie Blackmon's head and ran all the way to third base to complete the feat. He was the second major league player to do so that season, after Brock Holt of the Boston Red Sox, and the first member of the Rangers since Alex Rios in 2013. He finished the season on a strong note as he was named the American League Player of the Month for September when he hit .404 with 26 runs scored, 6 doubles, 5 homers and 20 RBI, just as the Rangers surged to a completely unexpected division title after their difficult 2014 season. For the season, he hit .276 with 32 doubles and 22 homers, scoring 94 runs and driving in 82. In the Division Series against the Toronto Blue Jays, he went 5 for 21 (.238) with a homer as the Rangers were eliminated in five games.

Choo went on the disabled list only a week into the 2016 season, because of a strained calf muscle. He started the year 3 for 16 (.188) with a home run in 5 games. He returned on May 20th after rookie Nomar Mazara had played very well in his absence. In his first game back, he drew a pair of walks and scored a run, but left the game in the 3rd inning because of a tight hamstring and went right back on the DL. He was activated on June 13th and managed to stay healthy for just over a month until he made his next DL stint, from July 20th to August 4th, because of inflammation in his lower back. He played 12 games in August when injury struck again on August 15th, this time a hit-by-pitch that broke a bone in his left forearm. The pitch came from Ross Detwiler of the Oakland A's on a checked swing and it was nearly season-ending. In 45 games, he was hitting .247 with 7 homers and 17 RBI. He did manage to come back for three games at the very end of the season, going 2-for-12, then played once in Texas's loss to the Toronto Blue Jays in the ALDS, going 0 for 3. He returned in full health in 2017, playing 149 games and hitting .261/.357/.423 with 22 homers, 78 RBI and 96 runs scored. In November, he took part in the Olympic torch relay race in his hometown of Pusan, in preparation for the 2018 Pyeongchang Olympic Winter Games.

When baseball was shut down during the coronavirus pandemic in early 2020, he decided to offer $1,000 to each of 190 players in the Rangers minor league system. That season, he played 33 games for the Rangers, hitting .236 with 5 homers and 15 RBIs. His OPS+ of 96 was his lowest in any season in which he played more than 10 games. He became a free agent after the season, and not finding a suitable team in MLB, decided to return to Korea with the SK Wyverns. This would be the first time he played in the Korea Baseball Organization.