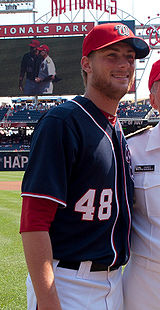 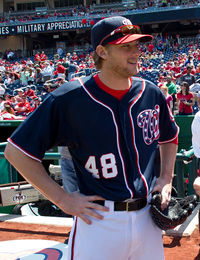 Pitcher Ross Detwiler was selected by the Washington Nationals in the first round of the 2007 amateur draft and was the first pick from that draft to play in the majors.

He was 0-2 with a 6.35 ERA as a freshman, walking 28 in 34 innings. In his sophomore season, he went 7-4 with a 2.81 ERA and 99 strikeouts in 93 IP. He was 5th in the Missouri Valley Conference in ERA and two strikeouts behind leader Brandon Magee. He was 2-0 with a 1.00 ERA in 5 games for the college Team USA that summer. He had 110 strikeouts and a 2.22 ERA as a junior before being picked sixth overall in the 2007 amateur draft, the highest any Missouri State University player had ever been selected. Detwiler was signed by scout Ryan Fox and made his pro debut that summer.

He debuted with the GCL Nationals on July 19, throwing two scoreless innings against the GCL Dodgers. He raced through the minors, making his debut for Washington on September 7th, after only 9 minor league appearance for the GCL Nationals (15 K in 12 IP, 2.25 ERA) and Potomac Nationals (2-2, 4.22, .310 opponent average) of the Class A Carolina League. This made him the first player selected in the 2007 draft to play in Major League Baseball.

In his first major league game, Detwiler relieved Mike Bacsik in the 8th inning, facing the Atlanta Braves. He retired Andruw Jones on a grounder. Yunel Escobar reached on an error but Detwiler retired the next two batters for a scoreless first inning in the majors. It was his only major league appearance of the season. He then spent all of 2008 not only in the minor leagues, but in the Class A Carolina League, with the Potomac Nationals. He was 8-8, 4.86 in 26 starts, pitching 124 innings, during which he gave up 140 hits, walked 57 batters and struck out 114.

Ross started the 2009 season in AA, with the Harrisburg Senators, where he started 6 games, going 0-3 but with a good 2.96 ERA. That earned him another call-up to Washington, where he pitched 10 games with a 6.40 ERA, before being sent back down at the All-Star break. This time he went to AAA, getting there for the first time after two discrete sojourns in the big leagues. With the Syracuse Chiefs, he was 4-2, 3.10 in 10 starts, earning another look from the Nats at the end of the season. He made another 5 appearances with Washington, bringing his record for the year to 1-6, 5.00 in 15 games, 14 of them starts, with 33 walks and 43 strikeouts in 75 2/3 innings. He was then set back by injuries early in 2010, and went back to Potomac and Harrisburg to work himself into shape. He then pitched three times in Washington in late July and early August, went down to Syracuse for a few more games, and finished the year back in the nation's capital. Overall, he was 3-2, 2.27 in 10 minor league starts, and 1-3, 4.25 in 8 games at the big league level. 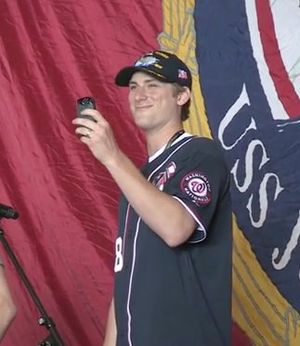 Given the amount of time Detwiler had missed the previous year, and his constant yo-yoing between levels ever since being drafted, the Nationals decided to have him start 2011 at Syracuse and leave him there for a spell, to give him a chance to settle down. He thus got to make 16 starts for the Chiefs, and while his record was only 6-6, 4.53, he had a chance to work on a regular schedule for a stretch, and this proved beneficial. When he was brought up to Washington in mid-year, he pitched better than he had ever had in the majors. In 15 games, including 10 starts, he maintained a very solid ERA of 3.00, with 63 hits allowed in 66 innings, and 41 Ks against 20 walks. By now the Nationals were producing quite a few pitching prospects, but Detwiler had finally shown enough to earn the team's fifth starter job when veteran Chien-Ming Wang went down with an ankle injury during spring training in 2012. He made 9 starts before Wang returned, going 3-3, 3.88. Ironically, in his 9th start, he was relieved by Wang when he failed to get out of the 5th inning with a lead facing the Atlanta Braves on May 26th. Wang pitched well and earned the win, and after the game manager Davey Johnson announced that Ross was moving to the bullpen as Wang was re-claiming his spot in the rotation. However, Wang could not remain healthy, and Ross eventually regained the spot, making 27 starts in 33 appearances with a record of 10-8, 3.40. He pitched 164 1/3 innings, giving up 149 hits and striking out 105 batters. He started Game 4 of the NLDS against the St. Louis Cardinals on October 11th with the Nationals on the brink of elimination and pitched quite well. In 6 innings he gave up just 3 hits and an unearned run and the Nats went on to win the game, 2-1, on Jayson Werth's walk-off homer in the 9th.

In 2013, he made only 13 starts, with a record of 2-7, 4.04, pitching 71 1/3 innings. In 2014, he pitched exclusively out of the bullpen, making 47 appearances, going 2-3, 4.00 with his first career save. He was not used in the postseason. On December 12, 2014, he was traded to the Texas Rangers in return for Chris Bostick and Abel De Los Santos, with the Rangers announcing that they were planning to use him as a starter again. However, he had a poor first half in 2015, going 0-5, 7.12 in 17 games, having been demoted to the bullpen after 7 starts. His ERA was the highest in the majors among pitchers with 40 or more innings. The Rangers tried to send him to the minor leagues just before the All-Star break but he refused the assignment, making him a free agent on July 15th. He signed with the Atlanta Braves two days later, but things did not improve as he was 1-0 but with a 7.63 ERA in 24 games, walking 16 batters in 15 1/3 innings. He was let go at the end of the year and on December 22nd agreed to a minor league deal with the Cleveland Indians.

Detwiler is remarkable in that he is a starting pitching who throws almost exclusively fastballs. Statistics indicate that over 90% of his pitches are fastballs - a ratio usually only found among short relievers. However, as a lefthander who can reach 96 mph on the radar gun and is consistently around 92-93 mph, he can get by with this lack of variety, compensating with the fact that he throws both a two-seam and a four-seam fastball, and that the two varieties have very different movement.