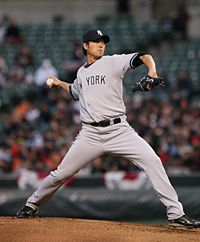 Chien-Ming Wang is the most successful Taiwanese player who has played in the major leagues. A member of the New York Yankees, he got 19 wins in his second year, his first full season in the majors, ranking 1st in the 2006 AL in wins, 8th in ERA and finishing second in the 2006 American League Cy Young Award voting. He again notched 19 wins the next year.

Wang was 1-0 with a 0.00 ERA in the round-robin phase of the 1997 World Junior Championship. He allowed only one hit in 7 innings, striking out 9. Canada's Jason Mandryk beat him out for All-Tournament honors at right-handed pitcher. Wang's Taiwan won Silver. In the 1999 World Port Tournament, Wang had a 1.59 ERA, striking out 6 and allowing 6 hits in 5 2/3 IP.

Wang was signed by scouts John Cox and Gordon Blakeley for the New York Yankees in May 2000 for a $1,9 million bonus. He pitched for the Staten Island Yankees in 2000. Wang helped Taiwan win Silver at the 2003 Asian Championship as they earned a spot in the 2004 Olympics.

In 2006, his K/9 was 3.14 (76 K in 218.0 IP), the lowest among all pitchers who pitched more than 150 innings, but he induced many ground balls. His two-seam fastball (sinker) is his best pitch, and it was hard for batters to hit liners against it. As a result, his ground-out/fly-out ratio was second to Roy Halladay, who is also famous for his two-seamer. He continued his string of success in 2007, going 19-7, and increasing his strikeouts from 76 to 104 in almost the same time on the mound. However, he was roughed up during the postseason, losing both of his ALDS starts against the Cleveland Indians while giving up 12 earned runs on 14 hits in only 5 2/3 innings of work.

Wang was off to another good start in 2008, with a record of 8-2, when he broke his right foot on June 15 while running the bases in an interleague game. He was expected to be sidelined for at six weeks but never pitched again. As it was clear that the Yankees would miss the postseason, there was little reason to rush Wang's return to action. Wang then struggled mightily in 2009, going only 1-6 with a 9.64 ERA in 12 games. He was shut down early once again, and completely missed the Yankees' run to a World Series title. He became a free agent after the season and signed with the Washington Nationals, but missed all of 2010 with an injury.

Wang made his return to the major leagues in 2011, making his first appearance for the Nationals on July 29th. He lost that start to the New York Mets, lost again in his second start, then earned his first win in over two years on August 9th when he beat the Chicago Cubs, 3-1. He gave up no runs and only one hit and two walks over 6 innings in that game. He made 11 starts in his comeback season, going 4-3 with a 4.04 ERA in 62 1/3 innings. In 2012, he was slated to be the Nationals' fifth starter in spring training, but suffered another setback, pulling a hamstring when he landed awkwardly on first base after fielding a ground ball from the Yankees' Russell Martin in a Grapefruit League game. Later that spring, he made a public apology for having conducted an extra-marital affair while training in Florida two years earlier. He returned to the Nationals on May 25th, relieving the man who had taken his spot as the team's fifth starter, Ross Detwiler in the 5th inning of a game against the Atlanta Braves. He pitched into the 8th inning, earning his team's 7-4 win. However, he only went 2-3, 6.68 in 10 games for the Nationals and was not re-signed at the end of the season.

Still unsigned, Wang pitched for the Chinese Taipei national team in the 2013 World Baseball Classic and did very well, turning out two solid starts for the team. He pitched six shutout innings against both Australia (a win) and Japan (leaving with a 2-0 lead after six, but was left with a no-decision when Japan rallied to win in extra innings). He led the Classic in ERA, edging out Cuba's Danny Betancourt (also a 0.00 ERA, but fewer innings). He was left off the All-Star team as Kenta Maeda, Nelson Figueroa and Fernando Rodney were picked as the three hurlers. His performance impressed enough to convince the New York Yankees to give him another shot, and they gave him a minor league contract on March 22nd. He went 4-4, 2.33 in 9 starts for the Scranton/Wilkes-Barre Yankees, but the the Yankees failed to call him up. He asked and was granted his release on June 7th, in order to sign with the Toronto Blue Jays, who had plans to use him at the major league level following an injury to Ramon Ortiz. He pitched 7 1/3 innings but got a no-decision in his first start for the Jays on June 11th, then was outstanding against the Texas Rangers in his second start on June 16th, tossing 7 scoreless innings in a 7-2 win that completed a four-game sweep. His arrival in Toronto coincided with a big turnaround for the team, which had started the season on a terrible note, but managed to claw its way back into the AL East division race. That meant that Wang had to pitch brilliantly to keep his spot in the rotation, and he was unable to do so. After he gave up 6 runs to the Detroit Tigers while recording just five outs in a start on July 2nd, his second straight early exit, he was designated for assignment with a record of 1-1, 7.13.

Wang then spent all of 2014 and 2015 in the minors. The first of those two seasons was split between the Louisville Bats and the Charlotte Knights, both in the International League, and he had a combined record of 13-8, 4.13 in 28 starts. In 2015, he could not find a major league team willing to employ him at the start of the season, and began the year with the Southern Maryland Blue Crabs of the independent Atlantic League. He went 3-0, 2.49 in 3 starts to get another shot at Organized Baseball, but it did not go too well as he was 4-5, 5.69 with the Tacoma Rainiers of the Pacific Coast League, and 2-6, 6.10 with the Gwinnett Braves of the IL. Still, he received an invitation to go to spring training with the Kansas City Royals in 2016, and made the team. He made his first major league appearance in over two and a half years on April 9th when he pitched a scoreless inning in a 7-0 victory over the Minnesota Twins.