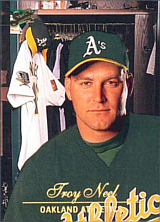 Troy Neel played three years in the majors leagues, all for the Oakland Athletics from 1929 to 1994, but gained his most fame in baseball as a star in Japan. Prior to his major league days, he was in the minors from 1986 to 1992, and then after the majors he came back in 1998 for 14 more games in the minors.

Starting in 1995, he played several years for the Orix Blue Wave in Japan, leading the Pacific League in homers and RBI in 1996. He was part of the winning team in the [1996 Japan Series]] with the Orix BlueWave and was named Japan Series MVP that year. He led the league in 1997 in strikeouts. Released after the 1997 season, Orix signed him again in 1998 when they struggled early in the season. Late that year, he came back to America for 14 Triple A games, hitting .244, but getting lots of walks and slugging .600 with the Vancouver Canadians of the Pacific Coast League. In 1999, he was back in Japan, but missed about half of the games due to injury.

In 2000, Neel was ordered to pay $5,000 a month to his ex-wife, the mother of his son and daughter. Instead of complying, he fled the country and played baseball in Japan. He played for the Doosan Bears of the KBO in 2001. By 2005, he owed over $700,000 in child support and was indicted in San Antonio, TX, on a charge of foreign travel to evade child support obligations. On December 11, 2008, he was arrested at Los Angeles International Airport, with his passport in the South Pacific having expired, and ultimately pled guilty to avoiding child support payments in 2009. He reached a one-time lump settlement with his ex of $116,000 and received probation.