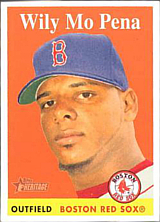 Wily Mo Peña made his Major League debut for the Cincinnati Reds in 2002. He played for them until after the 2005 season. During spring training in 2006, he was traded to the Boston Red Sox for pitcher Bronson Arroyo. He was very raw when he reached the majors, as he managed to obtain a major league contract from the Reds when he signed as an amateur free agent out of the Dominican Republic. That allowed him to reach the majors faster than he otherwise would have, but forced the Reds to keep him on the bench in the big leagues when it would probably have been better for his development as a player to be a regular in the minor leagues.

As a result of his unusual contract, he never got the most of his phenomenal raw skills, including tremendous power. Pena may very well have hit the longest home run in Kauffman Stadium history in 2007, when he sent a bomb to left field that nearly made it to I-70.

On August 17th, he was traded to the Washington Nationals for first baseman Chris Carter.

After being out of the big leagues since 2008, he returned in 2011 with the Arizona Diamondbacks. He played 17 games for the D-Backs, hitting .196 with 5 homers but only 7 RBI. He was designated for assignment on July 14th and signed on with the Seattle Mariners, then was called back to the majors on August 13th, after 1B Justin Smoak was placed on the disabled list. He played 22 games for Seattle, hitting .209 with 2 homers and 8 RBI.

Signing with the Nippon Pro Baseball defending champion Softbank Hawks for 2012, he hit 7th on Opening Day and played DH. He went 1 for 3 with a walk in their win over the Orix Buffaloes. Playing in Japan from 2012 to 2015 (and again in 2017), Wily Mo was a two-time NPB All-Star and made the Best Nine in 2012.