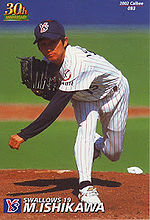 Masanori Ishikawa has been both a Rookie of the Year and ERA leader in Japan.

Ishikawa was a top pitcher in college, being named MVP as a sophomore; that year, he once pitched all 18 innings in a game. He finished up his collegiate career with a 23-8, 1.63 record. While in college, he pitched for the Japanese national team. He played for Japan in the 2000 Olympics, tossing 3 2/3 shutout innings out of the bullpen.

In the 2001 Asian Championship, Masanori was named the All-Star pitcher even though Japan only won a Bronze Medal. He was picked by the Yakult Swallows in the first round of the draft that year.

Ishikawa was put in Yakult's rotation right away, even though the club was fresh off a trip to the 2001 Japan Series. He was 12-9 with a 3.33 ERA as a rookie in 2002 and was named the Central League Rookie of the Year. He tied Trey Moore for 9th in the CL in ERA as Yakult's #2 starter behind Shugo Fujii.

The little left-hander was the first Rookie of the Year from Akita Prefecture since the CL and Pacific League had been created back in 1950.

In 2006, the Akita native again won a start on Opening Day. He finished the year 10-10 with a 4.53 ERA and a .310 opponent average; he walked only 17 in 151 innings. He made the CL All-Star team that season. For the year, he tied for 5th in losses (with Rick Guttormson and Jeremy Powell), was third in hits allowed (191, behind Daisuke Miura and Powell) and tied Kazuhisa Ishii for 4th in runs allowed (82). He became the third NPB pitcher to reach double-digit wins his first five years as a pro.

Ishikawa won a Gold Glove, the first Yakult pitcher ever to take home that honor.

Ishikawa throws a fastball (low to mid-80s, tops out at 89 mph), screwball (the best breaking ball of his package), slider, shuuto (two-seamer), and cutter.