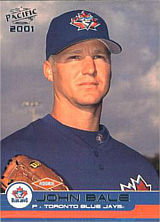 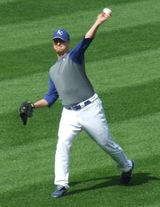 John Bale is a relief pitcher who last played with the Kansas City Royals.

In 1996, Bale was drafted by the Toronto Blue Jays in the 5th round of the 1996 amateur draft. He quickly ascended in the minors, from Low A in 1996 to Double A by 1998. Bale was a starting pitcher from 1996-1997 and posted solid strikeout numbers (9-10 per inning). He was converted to a reliever in 1998, lowering his ERA. He made his major league debut on September 30, 1999 against the Cleveland Indians, pitching two innings and allowing 2 hits, 2 walks and 3 earned runs, but he did strike out four batters.

After a solid season at Triple A Syracuse (3.19 ERA in 21 games/12 starts), Bale reached the majors again. He pitched in relief for two games, but struggled again as he allowed six earned runs in 3 2/3 innings. In the winter of 2000, Bale was traded to the Baltimore Orioles for outfielder Jayson Werth. Bale had a solid 2001 season, pitching in 11 games (9 starts) with an ERA between 2 and 3, splitting time between the Gulf Coast League Orioles and Triple A Rochester Red Wings. He pitched 14 games in relief for the Baltimore Orioles, with a 1-0 record and a 3.04 ERA.

During spring training 2002, John was traded to the New York Mets for outfielder Gary Matthews Jr.. He spent the entire season with the Triple A Norfolk Tides, posting a 2-2 record and 3.54 ERA pitching mostly out of the bullpen. In spring training 2003, he failed to win a bullpen spot with an ugly 17.18 ERA in 4 games, and started the season at Triple A again. Eight games into the season, he was released and signed by the Cincinnati Reds. Bale was primarily a reliever at Triple A Louisville and posted a 4-1 record and 3.30 ERA. Still posting high strikeout numbers, he was called up to the majors and finished with a 1-2 record and 4.47 ERA in 10 games (9 starts).

Japan and Return to the U.S.[edit]

On signing a two-year deal with the Kansas City Royals on December 8, 2006, Royals General Manager Dayton Moore said, "We are excited that John made a decision to sign with the Royals. He's a talented left-handed pitcher who is extremely versatile and will compete for various roles on our pitching staff." [1]

Bale played three years with the Royals, establishing career highs in appearances and strikeouts with diminishing returns each successive year. He spent some time on the disabled list, including a bizarre turn where, while already out with a shoulder injury, he broke his pitching hand punching a hotel door. In 2010, he returned to the Hiroshima Toyo Carp for one last ride in Nippon Professional Baseball and wrapped his career up after a strong campaign in the bullpen of the independent league Camden Riversharks in 2011.