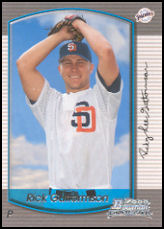 Rick Guttormson is a former starting pitcher who became the first player in Nippon Pro Baseball to be suspended for a positive steroid test.

He saw moderate success in his first full season, going 10-7 with two saves and a 2.60 ERA in 1998 with the Clinton LumberKings, finishing 8th in the Midwest League in ERA. He fanned 141 while walking only 41 in 159 innings. One troubling factor was that almost a third of his runs allowed were unearned, so his ERA was somewhat deceptively low.

Guttormson went 14-8 with a 3.72 ERA in 1999 with the Rancho Cucamonga Quakes, finishing 8th in the California League in ERA and making the league All-Star team. He led all Padres minor leaguers in victories and the team named him their Minor League Pitcher of the Year.

His career spiraled downhill after the injury-plagued year. In 2001, he went 5-17, with a 0-1, 10.80 mark in one game for the Portland Beavers and 5-16, 4.71 for Mobile. His ERA and opponent WHIP were not terrible by any means and the team was over .500 when others took the hill, so poor luck was likely the culprit. He led the Southern League - and all of the minors - in defeats.

Mariners scout Charley Kerfeld offered Guttormson a contract and he agreed, getting a second crack at Organized Baseball. In 2004, he played for the Double-A San Antonio Missions as a closer. He saw some success in that role - in 54 games, he went 5-4, saved 25 and posted a 3.29 ERA, but allowed over a hit per inning. He led all Mariners minor leaguers in saves that season.

Guttormson signed with the Yakult Swallows for 30-million yen and performance incentives in April of 2005. He went 8-5 with a 4.18 ERA for the Swallows that year.

In 2006, Yakult brought him back and he became the first pitcher in Japanese interleague play to throw a no-hitter when he did it on May 25 against the Tohoku Rakuten Golden Eagles. Some outlets reported that Guttormson said it was his first complete game as a pro, but this was incorrect. Due to foreign player limits, he was sent down to make roster space available for Dicky Gonzalez. Manager Atsuya Furuta said it may have been the first time in history that a pitcher was demoted to the minors after a no-hitter. He finished 7th in the Central League in ERA, one spot ahead of Kei Igawa, who was headed for a big contract with the New York Yankees. Guttormson was 9-10 with a 2.85 ERA that year.

Rick signed a two-year, 250-million yen deal with the Fukuoka SoftBank Hawks of the Pacific League to start in 2007. He started off 5-6 with a 3.37 ERA. Guttormson became the first player suspended under Japan's new steroid rules that year. A July 13 test found Finasteride in Guttormson's system; while not a performance-enhancing substance itself, it was a masking agent. This was revealed on August 10, when Guttormson was suspended for 20 days. Guttormson said the Finasteride was from a hair-growth product he used and that he was not using it as a masking agent. On August 11, Nikkan Sports reported that Yakult's trainer said Guttormson had told them he was using the hair growth product in 2006 and that the team later relayed to him that it contained ingredients banned by NPB. Rick returned to action in early September. He finished the year 5-7 with a 3.52 ERA, walking only 28 in 143 IP. He tied Tom Davey for 2nd in the league in hit batsmen (9), trailing Yu Darvish.

Guttormson signed with the KIA Tigers for 2009 and debuted on April 7 against the SK Wyverns, allowing four runs in seven innings and taking the loss in his Korean debut. He went onto pitch in 26 games (25 starts), accumulating a 13-4 record and a 3.24 ERA. He signed with the Philadelphia Phillies in March 2010, however the squad released him later that month.