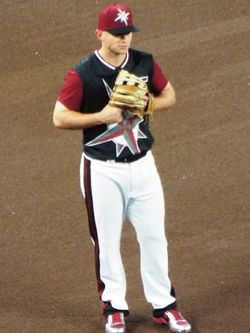 Infielder Kyle Seager was taken by the Seattle Mariners in the third round of the 2009 Amateur Draft. He was signed by scout Rob Mummau for $436,500 and made his pro debut that summer. He would end up as one of the top players in franchise history, playing 1,480 games for the Mariners over 11 seasons. He never played for any other major league team, and the M's failed to make the postseason during his tenure as their starting third baseman.

Seager was called up to the big leagues on July 6, 2011 after spending only two weeks (12 games, .455/.500/.673) at AAA Tacoma. After being sent back down to Tacoma, he was called up again on August 2nd and had the distinction of playing a game both in the minor leagues and major leagues that day. He went 0 for 5 for Tacoma in an afternoon game before being called up, then drove up to Seattle, WA and got to the ballpark in time to get an at-bat in that night's game against the Oakland Athletics. he hit .258 in 53 games for Seattle that first season, with 3 homers and 13 RBIs. In 2012, he was the regular third baseman, playing 155 games with a .259 batting average, but very good power, with 35 doubles and 20 homers. He scored 62 runs and drove in 86.

On June 5, 2013, he hit his first career grand slam in the bottom of the 14th inning against Addison Reed of the Chicago White Sox. Because the Sox had scored five times in the top of the inning, breaking a 13-inning scoreless tie, Seager's slam only tied the score at 5-all, the first time in history that an extra-inning slam only tied the score. It was also the first time that a team had come back from five or more runs down in the 14th inning or later. Seager also hit a double and a single in the game, while drawing a pair of walks, but it was all in vain as the Mariners lost, 7-5, in 16 innings. He played another full season at third base that year, this time logging 160 games. He hit .260 and again displayed good power, with 32 doubles and 22 homers. This time he scored 79 runs and drove in 69.

He started the 2014 season stone cold, as he was hitting .156 with no homers and 4 RBIs after 19 games, but soon got hot. On June 2nd, he put on a power display in a 10-2 win over the New York Yankees. He hit a double, two triples and a homer that day, the first player with that particular combination of extra-base hits since Hal Breeden of the 1973 Montreal Expos; no one had done it in the American League since Hoot Evers of the 1950 Detroit Tigers. The turnaround was good enough to land him a spot on the All-Star team, as a replacement for injured slugger Edwin Encarnacion. He continued to hit well over the second half, finishing with 27 doubles, 25 homers and 96 homers, to go along with a .268 average, the highest of his career. He was also good with the leather as we named the winner of the Gold Glove at third base in the American League. On December 2nd, he was rewarded with a seven-year contract from the Mariners, worth $100 million.

In 2015, Kyle basically repeated his previous season, although this time he was neither an All-Star nor a Gold Glove winner. He hit .266 in 161 games with 37 doubles, 26 homers and 74 RBIs. In 2016, he missed hitting the 100-RBI mark by 1, finishing with 99, and continued to be a very productive hitter with a .278 average, 36 doubles and 30 homers in 158 games, setting personal bests in all three triple crown categories. In 2017, he continued in this vein by hitting .249 with 27 homers and 88 RBIs in 154 games. At the end of the season, he had a streak of six straight seasons with an OPS+ above 100. However, the Mariners had not come close to competing for a postseason slot in any of these. Ironically, when the M's had their best season in ages in 2018, he had his worst year, with his batting average falling to .221 in 155 games, 22 homers and 78 RBIs. It wasn't a complete disaster, but his OPS+ fell to 86, the lowest of his career by a wide margin. The Mariners had started the season strong and seemed a lock to finish second in the AL West behind the Houston Astros, earning them a spot in the Wild Card Game, but it all came crashing down in the second half as they were caught and left well behind by the Oakland Athletics and once again missed the postseason.

Following the disappointing 2018 season, the Mariners cleaned house, with a number of veterans like Robinson Cano, Nelson Cruz, Jean Segura, Mike Zunino and James Paxton, and even young relief ace Edwin Diaz all leaving. Seager was one of the few recognizable faces left. However, during spring training in 2019, Kyle injured a tendon on his right middle finger and had to have surgery, putting him on the injured list for the first time of his career. Early indications were that he would be out until June. he beat that prognosis by returning on May 25th, by which point the Mariners had wasted a solid start to their season and had fallen to the bottom of the standings. He had a tough times getting his bat started, as he was still hitting just .218 by the end of July, with 9 homers and 25 RBIs in 55 games. He finally started to get hot in August and on August 13th he had the first three-homer game of his career in an 11-6 win over the Detroit Tigers. The third homer was a bit of a gift, as in the 9th inning CF Niko Goodrum and LF Brandon Dixon collided in chasing what appeared to be a routine fly ball at the warning track and unwittingly pushed it over the fence.

Seager's brother, Corey Seager, was a first round selection in the 2012 amateur draft and reached the majors in 2015. Another brother, Justin Seager, was taken in the 2013 amateur draft. Because of the seven-year age difference with Corey, Kyle had never played against him in a game until Corey's Los Angeles Dodgers played the Mariners in the Cactus League in 2018. Kyle is good-natured about the fact Corey quickly became a big star in L.A., while he played in relative obscurity in the Pacific Northwest. When players were allowed to put their nicknames on the back of their uniforms during a special promotion in 2017, Kyle used "Corey's Brother" as his moniker. Their first meeting in a regular season game came on August 17, 2020 and both brothers homered in an 11-9 win by the Dodgers. That year, he played in all 60 games for the Mariners in the pandemic-shortened season, hitting .241 with 9 homers and 40 RBIs and an OPS+ of 121. He finished his career with one of his best seasons, in 2021, when he hit a career-best 35 homers and 101 RBIs. He batted just .212 - the entire Mariners team struggled with batting average, but his OPS+ was at 100, meaning he had been at 100 or better in 9 of his 11 major league seasons. The Mariners came very close to making the postseason, thanks to an uncanny ability to win close games - or a lot of luck, others would say, as they allowed more runs than they scored while finishing only a couple of games out of the postseason. He became a free agent after the season, and it was clear the Mariners would not be willing to sign him at anywhere near market value, given his advancing age; while he could likely have found a home in another city for a couple more seasons, he decided to call it a career instead, not wanting to suit up for a team other than Seattle, and informed his fans of his decision on December 29th.