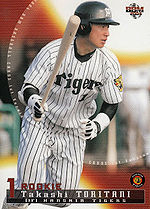 Takashi Toritani has been an All-Star shortstop for the Hanshin Tigers.

Toritani is a natural left-hander who learned to throw right-handed while in high school. A two-way player in high school, he was timed at 88 mph. In college, Toritani won a Triple Crown in the Tokyo Big Six University League as a sophomore and then won a batting title as a senior. Overall, he hit .333 in college. He batted .333/.400/.650 in the 2002 World University Championship to help Japan take the Bronze Medal. He tied Eric Patterson for second in the event with three steals, trailing only Lingfeng Sun. He was named the All-Star shortstop in the event.

The Hanshin Tigers took the highly-touted shortstop in the first round of the 2003 amateur draft. As a rookie in 2004, he backed up Atsushi Fujimoto at short and Kentaro Sekimoto at third and hit an unimpressive .251/.320/.345 while fielding .982. His first hit in Nippon Pro Baseball was a single off Yukinaga Maeda on April 2. On May 27, he hit his first homer, against Kazumasa Azuma.

Becoming the starting shortstop for the Tigers in 2005, Toritani forced Fujimoto over to second base. Hitting 7th or 8th in the early part of the season, he was batting in the #2 slot by year's end. Overall, the second-year player improved to .278/.343/.376 with 82 runs and 27 doubles though he did strike out 115 times. He fielded .985 and made the Central League All-Star team. He was 9th in the CL in doubles and was 10th in strikeouts. He went 4 for 14 with a walk and a double in the 2005 Japan Series but Hanshin hit under .200 as a team and Toritani failed to score or drive in a run against the Chiba Lotte Marines with little support (Akihiro Yano and Shinjiro Hiyama were the only others to provide any real help).

Toritani kept improving in 2006, hitting .289/.362/.431 with 28 doubles and 15 home runs. He had 490 assists, setting a new NPB record at short. He tied Alex Ramirez for 9th in the CL in doubles, tied Norihiro Akahoshi for 9th in walks (60), was 10th in strikeouts (111) and was 8th in OBP. He was presumably a serious candidate for the Best Nine but Hirokazu Ibata was chosen instead. He made his second All-Star team. That year, he had Lasik surgery to improve his vision.

The Waseda alumnus had a batting line of .281/.365/.411 in 2008 and drove in 80 while usually batting sixth. He set a Hanshin franchise record for RBI by a shortstop. He was third in the CL with six triples, one behind co-leaders Kazuki Fukuchi and Yasushi Iihara. He was also 7th in RBI and 4th with 68 walks, trailing only Tyrone Woods, Tomoaki Kanemoto and Akahoshi. He made the Best Nine as the top shortstop in the CL.

In 2009, the veteran infielder was placed in the #3 spot in the batting order and showed his best pop yet with 31 doubles and 20 home runs. He hit .288/.368/.465 with 84 runs, 75 RBI and 65 walks. He lost the Best Nine nod at short to Yomiuri's Hayato Sakamoto. He was 4th in the CL in runs, 3 behind co-leaders Sakamoto, Tony Blanco and Norichika Aoki. He was also 7th in doubles, tied Yoshiyuki Kamei for 7th in total bases (250), was 6th in walks and tied Kanemoto for 7th in OBP. He also fielded .990, leading NPB shortstops while setting a record for a shortstop whose home stadium had a dirt field. Hirokazu Ibata beat him out for the Gold Glove.

Toritani played 398 consecutive games with appearing in every inning, a NPB record for a shortstop.