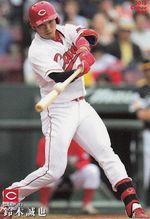 Seiya Suzuki was an outfielder in Nippon Pro Baseball and for the Japanese national team before moving over to Major League Baseball in 2022. From 2016-2019, he twice led the league in OPS and finished second the other two times.

Suzuki hit 43 home runs in high school and his fastball was timed at 91 mph as a pitcher. He said he wanted to focus on being an outfielder to be like another Suzuki, Ichiro Suzuki. The Hiroshima Carp took him in the second round of the 2012 NBP draft. He spent most of 2013 in the minors but was called up in September. He made his NPB debut batting for Ryuji Yokoyama and was retired by Hirokazu Sawamura. He went 1 for 12 that year, his lone hit coming off Nobutaka Imamura. In 2014, he fared very well in limited time - .344/.382/.500 in 68 plate appearances over 36 games. His first home run came against Masanori Ishikawa. He hit .423/.516/.846 with four triples in the 2014 U-21 Baseball World Cup, joining Arnol Rizo and Yu-Ning Tsao as the All-Star outfielders. He tied Seung-ho Kang for the tournament lead in three-baggers.

He produced at a .275/.329/.403 in 97 games in 2015, beginning to see somewhat regular playing time at age 20. He blossomed in 2016. He hit .335/.404/.612 with 29 home runs and 95 RBI. He became the tenth player in NPB history to hit sayonara home runs in consecutive games and the second Carp player to do so, Kiyoyuki Nagashima having done it 32 years earlier. He was the youngest player to perform the feat. The next game, he hit another game-winning homer, becoming the fourth player to hit game-winning home runs in three straight games, following Hiromu Fujii, Akira Eto and Tadahito Iguchi. He made the Central League All-Star team. In 2016 NPB All-Star Game 1, he pinch-ran for the game's MVP, Yoshitomo Tsutsugo. He stayed in the game in right field, Shun Takayama moving to left to replace Tsutsugo there. In his lone at-bat, he singled off Dennis Sarfate and scored on a hit by Yasutaka Tobashira with what wound up to be the winning run in a 5-4 victory. In Game 2, he started in right field and hit a sacrifice fly off Hideaki Wakui in the second. He singled off Kazuhisa Makita in the 5th and doubled off Kohei Arihara in the 7uth, scoring on a Tobashira double to start his NPB All-Star career 3-for-3. He flew out against Arihara his last time up in a 5-5 tie. He finished among the CL leaders in average (2nd, .009 behind Hayato Sakamoto), OBP (2nd, .026 behind Tsutsugo), slugging (2nd, .068 behind Tsutsugo), runs (76, 9th), hits (156, 8th, between Toshihiko Kuramoto and Tomotaka Sakaguchi), doubles (26, tied for 8th with Tetsuto Yamada), triples (8, tied for second with Yoshihiro Maru), home runs (5th, between Wladimir Balentien and Shuichi Murata), RBI (tied for 5th with Jose Lopez), steals (16, 7th), caught stealing (11, tied for third with Masayuki Kuwahara) and total bases (285, 3rd, behind Tsutsugo and Yamada). He won a Gold Glove (joining Maru and Yohei Oshima as the winners in the CL) and Best Nine (alongside Tsutsugo and Maru) and he helped Hiroshima win their first CL pennant in 25 years. He finished third in voting for the 2016 Central League Most Valuable Player Award behind Takahiro Arai and Ryosuke Kikuchi. In game 1 of the 2016 Japan Series, he scored the first run. He drew a walk from PL MVP Shohei Otani, advanced on a Tomohiro Abe and stole home on a delayed double steal. It was the first steal of home in a Japan Series since Shozo Doi in 1969. He hit .222/.389/.400 on the Series, with four runs in six games, as the team fell to the Nippon Ham Fighters.

Suzuki hit .214/.313/.214 in 14 at-bats as a part-timer for Japan in the 2017 World Baseball Classic, posting the lowest OPS of any Japanese player with more than 3 at-bats. In 2017 NPB All-Star Game 1, he played the whole game in right, going 1 for 4 with a double (the two-bagger coming off Yusei Kikuchi) in a 6-2 loss. In Game 2, he was 0 for 2 after replacing Yoshio Itoi in a 3-1 loss. He produced at a .300/.389/.547 clip for the 2017 season with 85 runs, 28 doubles, 26 homers, 90 RBI, 16 steals in 22 tries and 62 walks. He tied Tsutsugo for 5th in runs, tied Ryosuke Kikuchi and Toshiro Miyazaki for 8th in doubles, was 6th in homers (between Brad Eldred and Yamada), ranked 4th in RBI (between Maru and Alex Guerrero), tied Hiroki Uemoto for 7th in swipes, tied Takayuki Kajitani for 9th in walks, was 7th in total bases (between Kuwahara and Sakamoto), was 7th in average (between José López and Takashi Toritani), placed 5th in OBP (between Toritani and Casey McGehee), was 2nd in slugging (.016 behind Guerrero) and led in OPS (27 ahead of Tsutsugo). He was 4th in voting for the 2017 Central League Most Valuable Player Award behind Maru, Kazuki Yabuta and Tomoyuki Sugano, 2nd to Maru among position players. He won a Gold Glove alongside Kuwahara and Maru and a Best Nine alongside Tsutsugo and Maru.

Suzuki had a dominant run for Japan in the 2019 Premier 12. He hit .444/.529/1.037 with 8 extra-base hits (3 homers), 9 runs and 13 RBI in 8 games. He hit a 3-run shot off Giovanni Soto in a 4-0 win over Puerto Rico, a two-run dinger against Yi-Chung Liao finishing a double short of a cycle against Taiwan and a 4th-inning homer off Dushan Ruzic to begin a comeback win over Australia. He fell a homer shy of a cycle in Japan's lone loss, to Team USA, scoring all their runs in a 4-3 loss; he tripled and singled off Clayton Richard and doubled against Caleb Thielbar. In the Gold Medal Game, he had a first-inning double off South Korea's Hyeon-jong Yang to drive in Sakamoto with Japan's first run en route to a 5-3 win. He tied Jonathan Jones for the most runs in the tournament, was 2nd to Jo Adell in hits (13 to 12), led in extra-base hits (3 ahead of Jung-hoo Lee), tied for 2nd in doubles (3), led in triples (2), tied for first in homers (with Jones, Adell, Brent Rooker and Matt Clark), led in RBI (5 ahead of runner-up Bobby Dalbec), led in total bases (28, 5 ahead of Adell), tied for 4th in walks (5), tied for 3rd in steals (2, behind Ukyo Shuto and Min-woo Park), led in average among players with 15+ at-bats (.050 ahead of Adell), led in OBP among those with 15+ at-bats (.045 ahead of Lee) and led in slugging among those with 15+ at-bats (a whopping .237 ahead of Rooker and Clark). He was 326 OPS points ahead of Clark, the next-best among those with 15+ at-bats. He was an easy pick for both the All-Star team (joining Jones and Lee in the outfield) and MVP.

Suzuki hit .300/.409/.544 with 25 homers, 85 runs, 75 RBI and 72 walks in 118 games in 2020, a season shortened by the COVID-19 pandemic. He was, as usual, all over the CL leaderboards though not quite as high: runs (2nd, 3 behind Kajitani), doubles (26, tied for 7th with Miyazaki and Okamoto), homers (tied for 5th with Soto), RBI (7th, between Maru and Keita Sano), walks (2nd, 15 behind Munetaka Murakami), total bases (234, tied Maru for 4th), average (8th, between Miyazaki and Chikamoto), OBP (3rd, after Murakami and Norichika Aoki), slugging (6th, between Okamoto and Sano) and OPS (3rd, after Murakami and Aoki). He joined Sano and Maru as the Best Nine picks in the outfield and won a Gold Glove, alongside Aoki and Oshima. He got one first-place vote and no seconds or thirds for the 2020 Central League Most Valuable Player Award but that was still good for 7th, between Sano and Masato Morishita.

Following the 2021 season, he indicated his desire to be posted in order to play in Major League Baseball in 2022. This became official on November 22nd, when the Hiroshima Toyo Carp placed his name on the list. In a free agent market dominated by pitchers and shortstops, he was an intriguing option as a rare slugging outfielder, though Japanese sluggers had a mixed record in the US as some (like Otani and Hideki Matsui) had thrived but others like Tsutsugo or Kenji Johjima had disappointed. His future was then put on hold by the 2021-2022 lockout, which took effect on December 1st, before the posting period had expired, and which prevented all teams from making transactions at the major league level. So he hat to wait until the labor dispute to be resolved, which took until the following March, for the Chicago Cubs to make the winning bid, with a five-year deal worth $85 million. The announcement came on March 16, 2022 just as spring training was finally getting under way. He was described as "The most exciting Japanese star to join MLB since Shohei Ohtani". He made his major league debut on Opening Day, April 7th, as the Cubs' starting right fielder. Since it was the first game played that day, he was the first new player to make his debut in 2022. He went 1 for 2 with 2 walks in the Cubs' 5-4 win over the Milwaukee Brewers that day, his first major league hit being a single off Corbin Burnes in the 5th inning. He quickly made himself a fan favorite as he had a two-homer performance on April 12th that accounted for all of Chicago's runs in a 2-1 win over the Pittsburgh Pirates. That gave him 3 homers, 8 RBIs and 4 walks in his first four games. He also got hits in 9 of his first 10 games; in the other, he drew a walk as a pinch-hitter in his only plate appearance, thus not snapping his ongoing hitting streak. He batted .429 over the stretch, and was the first winner of Player of the Week honors in the National League. The last Cubs batter to start off his career with a nine-game hitting streak had been Andy Pafko, back in 1943. He continued to hit well the rest of the month and was named the National League Rookie of the Month for April, posting an OPS of 934 in 21 games; it was the fourth time in five months that a Cubs player had won the award, with Patrick Wisdom and Frank Schwindel (twice) winning it for three of the last four months of 2021.

He was hitting .245 in 41 games at the end of May when he had to miss a month of action due to a left hand injury. When he returned on July 4th, he immediately made the newsreels by hitting an inside-the-park homer in the top of the 9th inning off normally invincible Brewers closer Josh Hader, breaking a 1-1 tie. It was the first inside-the-parker by a Cubs player since Javier Baez had hit one in 2017.