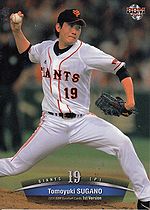 Tomoyuki Sugano has pitched in Nippon Pro Baseball; his first manager was his uncle Tatsunori Hara.

Sugano was 37-4 with a 0.57 ERA in college. He was named the best right-handed pitcher in the 2009 Asian Championship, won by Japan. In the 2010 World University Championship, he was 1-0 with a 2.38 ERA, getting a win over Taiwan; Japan got the Bronze Medal. The Nippon Ham Fighters took him in the first round of the 2011 NPB draft but he refused their offer, becoming the first first-rounder not to sign since Tetsuya Utsumi in 2000. He had wanted to pitch for his uncle's Giants. The Yomiuri Giants promptly took him in the first round of the 2012 draft and he signed.

He had a very good rookie season at 13-6, 3.12 with 155 K in 176 IP in 2013. He made the Central League All-Star team and was the 7th Yomiuri rookie to win 13+ games, following is the seventh rookie in franchise history to win thirteen or more games. He followed Eiji Sawamura, Motoshi Fujita, Ritsuo Horimoto, Kunio Jonouchi, Tsuneo Horiuchi and Koji Uehara in doing so; Uehara had been the last one, back in 1999. He finished among the CL leaders in wins (tied with Utsumi for third behind Yasuhiro Ogawa and Kenta Maeda), ERA (6th, between Ogawa and Hirokazu Sawamura) and strikeouts (3rd behind Randy Messenger and Maeda). In the Climax Series playoffs, he tossed a 3-hit, 11-strikeout shutout against the Hiroshima Carp and was named Series MVP as Yomiuri advanced to the 2013 Japan Series. In both starts in the Series, he faced off with Masahiro Tanaka, who had gone 24-0 in the regular season for the Rakuten Golden Eagles. He lost game 2, tossing 5 shutout innings to match Tanaka before fading in the 6th with hits by Takero Okajima and Ginji Akaminai and a walk to Andruw Jones to give up one run with one out before Sawamura relieved. In game 6, he beat Tanaka for Tanaka's lone loss of the year, allowing 3 hits, 2 walks and 2 runs in 7 innings (an error by José López scoring one of the two runs). He was relieved by Tetsuya Yamaguchi. Yomiuri fell in 7 games. Sugano finished second in voting for the 2013 Central League Rookie of the Year Award, but his 13 votes were a distant 239 behind leader Yasuhiro Ogawa. He also was 9th in voting for the 2013 Central League Most Valuable Player Award, between Ogawa and Scott Mathieson.

He started 2015 NPB All-Star Game 1 for the CL but surrendered four runs in three innings, including a three-run dinger to Ikuhiro Kiyota. Shintaro Fujinami took over with a 4-2 deficit but the CL rallied to win. He was a hard-luck hurler in 2015 at 10-11, 1.91. He nearly had a losing record despite finishing second in ERA (.06 behind Kris Johnson). He tied Shunta Wakamatsu for 10th in wins, was 4th in losses, tied Yudai Ono for second with 6 complete games, tied Miles Mikolas for third with two shutouts and was 8th with 126 K (between Ogawa and Atsushi Nohmi). He got one third-place vote for the 2015 Central League Most Valuable Player Award. In the 2015 Premier 12, he started against Team USA and allowed two runs in four innings but five hits and three walks before Takahiro Norimoto took over in what would become a 10-2 win. In the Bronze Medal game, he relieved Shota Takeda with a 8-0 lead over Mexico in the 4th. He allowed only one baserunner in three innings, a solo homer to Juan Perez, before handing the ball to Yasuaki Yamasaki to close it out.

The Kanagawa native again started for the CL in 2016 NPB All-Star Game 1 and was much better than a year prior, retiring Shogo Akiyama, Katsuya Kakunaka, Yuki Yanagita, Sho Nakata, Nobuhiro Matsuda and Yuya Hasegawa in order before Fujinami relieved in the third of a 5-4 win. He had been dueled evenly by the PL's Tsuyoshi Wada. For the 2016 campaign, he was 9-6 with a 2.01 ERA. This time, he beat Johnson for the ERA crown (by .14). He also tied Utsumi and Kenta Ishida for 8th in the CL in wins, tied Shun Yamaguchi for the lead with 5 complete games, tied Yuta Iwasada and Johnson for second with two shutouts, led with 189 whiffs (12 ahead of Messenger) and only walked 26 in 183 1/3 IP (second in IP, two behind Messenger). He got one third-place vote for MVP again.

He was one of the most-used hurlers in the 2017 World Baseball Classic. His three starts tied Seth Lugo, Jason Marquis, Rick van den Hurk and Marcus Stroman for the tourney lead, his 14 1/3 IP were third, his 14 hits were second (one behind van den Hurk) and his 16 whiffs tied Kodai Senga for the most. Despite all that, he had no decisions. In his first game, he went 4 1/3 IP (4 H, 4 K, 0 BB), allowing an Allan de San Miguel homer and relieved by Senga with a 1-1 tie against Australia in what would be a 4-1 win. His next start was a no-decision versus Cuba; again Japan won. Finally, in the semifinals, he got the nod against Tanner Roark and the US. He was excellent, allowing only three hits and one walk in six innings while fanning six; he allowed one run when Andrew McCutchen singled in Christian Yelich with an unearned run. Senga relieved in what would be a tough 2-1 loss for the two-time Samurai Japan squad.

He kept on rolling into the 2017 season. In 2017 NPB All-Star Game 2, he got the start (Raúl Valdés had started Game 1). He allowed hits to Akiyama and Alfredo Despaigne but struck out three in two shutout innings before Takumi Akiyama took over with a 1-0 lead; the CL went on to lose 3-1. He was 17-5 with a 1.59 ERA for 2017. He led the CL in wins (two ahead of Kazuki Yabuta), ERA (.66 ahead of Mikolas), complete games (6, double anyone else) and shutouts (4, double anyone else). He was second with 187 1/3 IP (2/3 behind Mikolas) and 171 K (16 behind Mikolas) to cost him a pitching Triple Crown. He won the Sawamura Award as the top pitcher in NPB, beating out Yusei Kikuchi. He also finished third in voting for the 2017 CL MVP, behind Yoshihiro Maru and Kazuki Yabuta. His 40 first-place votes were second-most, behind Maru's 196.

He won 2019 NPB All-Star Game 2 as well, allowing two hits in two shutout innings before Yuya Yanagi took over. He fell to 11-6, 3.89 in an off-season in 2019. He tied for 3rd in the CL in wins (behind Shun Yamaguchi and Shota Imanaga) and was 9th in K (120, between Haruto Takahashi and Yuki Nishi). He missed over a month with injury, returning to Game 4 of the 2019 Japan Series with Yomiuri down 3 games to 0 against the Softbank Hawks. He allowed four runs (three earned) in six and a third innings, three on a Yurisbel Gracial homer, and lost to veteran Tsuyoshi Wada.

The 2020 season was shortened by the COVID-19 pandemic. He had a rebound year, though, at 14-2, 1.97 once things got going. He led the CL in wins (by 3), was 3rd in ERA (behind Ono and Masato Morishita), was 2nd with 131 K (17 behind Ono) and was second to Ono in shutouts (6 to 3). In the 2020 Japan Series, he again struggled as the Hawks swept the Giants, giving up four runs in six (all driven in by Ryoya Kurihara) in a loss to Kodai Senga. He won the 2020 Central League Most Valuable Player Award handily, with 1,438 vote points to 786 for runner-up Kazuma Okamoto and 261 first-place votes to Okamoto's 30. In addition to his second MVP, he won his fourth Gold Glove.

After the season, he was posted by Yomiuri. However, while a number of teams showed interest, none made an offer that Sugano was ready to accept, and he decided to return to Japan for one more season, hoping for a more positive market following the 2021 season.