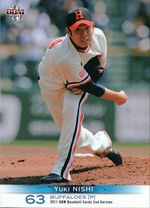 Yuki Nishi has been an All-Star pitcher in Nippon Pro Baseball.

The Orix Buffaloes took him in the third round of the 2008 NPB draft; neither of the first two picks panned out but Nishi did. He debuted the next fall, relieving Hidetaka Kawagoe in the 7th with a 8-2 deficit against the Rakuten Golden Eagles. He retired Fernando Seguignol, Toshiya Nakashima and Daisuke Kusano. Ryota Katsuki relieved him in the 8th. He finished 2009 with four innings, no hits or runs and one walk. He had a 3.41 ERA in 18 outings (one start) in 2010.

Moving into the Orix rotation in 2011, he posted a 10-7, 3.03 record with a 1.03 WHIP. In a pitcher-friendly year, he did not make the Pacific League top 10 in wins or ERA. He was 8-3 with a 2.78 ERA in 2012. He would not have made the top 10 in ERA had he qualified. He did make his first PL All-Star team. In 2012 NPB All-Star Game 1, he relieved Yuki Saito in the 4th with a 3-1 deficit against the Central League and retired Yoshinobu Takahashi. Shinya Miyamoto and Ken Hirano in order. Naoya Masuda relieved him in the 5th of a 4-1 loss. He threw a no-hitter against the Softbank Hawks on October 8, fanning nine and allowing only one baserunner (a walk to Nobuhiko Matsunaka in the 5th). He was the 26th Pacific League hurler to throw a no-no, the first since Narciso Elvira in 2000. He was only the second NPB hurler to throw a no-hitter on the last day of the season and the first in NPB's 64 years of being a two-league format; Mitsuhiko Ishida had done it in the spring 1937 season.

Nishi was 9-8 with a 3.63 ERA in 2013. With offensive levels going back up, he was 9th in the PL in ERA (between Ken Togame and Hiroshi Kisanuki), tied for 7th in wins and was 5th in strikeouts (137, between Takayuki Kishi and Takahiro Norimoto). He went 12-10 with a 3.29 ERA in 2014. He improved to 5th in ERA (between Norimoto and Jason Standridge), 4th in victories and tied Luis Mendoza for 7th with 119 strikeouts. In game 3 of the 2014 Nichi-Bei Series, he relieved Norimoto with a perfect game in process against the MLB All-Stars. He walked Lucas Duda but then retired Dexter Fowler (K), Alcides Escobar and Ben Zobrist (K) in order. He hit Robinson Cano to open the 7th but then got Carlos Santana, Justin Morneau and Yasiel Puig, the latter two on whiffs, before Kazuhisa Makita relieved. The NPB All-Stars finished with a no-hitter of the MLB All-Stars for the first time ever and clinched a series winner for the first time as well.

Nishi relieved Shohei Otani in the 3rd inning of 2015 NPB All-Star Game 1, with a 4-1 lead. He allowed a run on singles by Yuhei Nakamura, Takayuki Kajitani and Takashi Toritani then a one-out sacrifice fly by Yoshitomo Tsutsugo but retired Shinnosuke Abe to avoid further damage and went 1-2-3 in the 4th. Hideaki Wakui would relieve in the 5th and the PL would go on to a 8-6 loss. For the regular 2015 season, he was again strong at 10-6, 2.38. He was second in ERA (.14 behind Otani), tied for 7th in wins and was 4th with 143 strikeouts (between Shota Takeda and Kenichi Nakata). He was on the Japanese national team for the 2015 Premier 12 but struggled as his 7.20 ERA was the staff's highest. He allowed one run in one inning of relief in a win over Mexico. Against Venezuela, he got the start but allowed a solo homer to Ray Olmedo and a two-run dinger to Juan Apodaca and was relieved by Yudai Ono with a 3-2 deficit after 3; Japan rallied to win, 6-5.

His fastball has peaked at 92 mph.