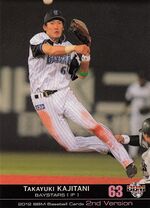 Takayuki Kajitani has been an All-Star in Nippon Pro Baseball.

The Masuda native was the lead-off hitter and center fielder for the CL in 2015 NPB All-Star Game 1. He struck out against Shohei Otani but singled off Yuki Nishi. In the 5th, he hit a double off Hideaki Wakui to score Yuhei Nakamura, then scored the tying run on an error. He struck out against Wakui and flew out against Naoki Miyanishi but had turned in a solid game in a CL win. [5] In Game 2, he started in center and hit 6th and again did well. After fanning against Mitsuo Yoshikawa, he singled off Ken Togame to score Hector Luna. In the 5th, he singled off Togame again, plating Takahiro Arai before striking out against Tomomi Takahashi his last time up. Takahiro Suzuki replaced him in center, while Nakamura took over his spot in the lineup. [6]

For 2015, he batted .275/.342/.425 with 35 doubles, 70 runs, 66 RBI, 54 walks and 28 steals (caught 13 times). He fielded .992 and had 8 outfield assists, his three double plays leading CL flyhawks. He tied Oshima for 6th in runs, was 10th in average (between Matt Murton and Arai), was second in doubles (four behind Tetsuto Yamada), was 8th in RBI (between Hayato Sakamoto and Yoshihiro Maru), was second in swipes (6 shy of Yamada), led in caught stealing (two more than Uemoto), was 7th in slugging (between Ryosuke Hirata and Mauro Gomez) and was 10th in OPS (between Maru and Luna).