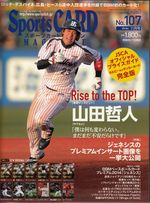 Yamada was taken by the Yakult Swallows and Orix Buffaloes in the first round of the 2010 draft; Yakult won the lottery for his rights. He hit .259 in the minors in 2011. He was activated in time for the Climax Series playoffs and became the second player in NPB annals to debut in a Climax Series, following Tatsuro Iwasaki (2007). He was the first to do it as a starter, starting at short for game 2 and going 0 for 4 as the leadoff hitter against the Chunichi Dragons. He started the next two games as well, going 0-for-3 with a walk then 2-for-4 with a RBI, but Yakult failed to make the 2011 Japan Series. His first hit came off Yudai Kawai, a double to bring in Ryosuke Morioka.

Yamada was Yakult's third-string shortstop in 2012 behind Shingo Kawabata and Morioka, hitting .250/.327/.364 in 49 plate appearances over 26 games. His first regular-season NPB game came on April 5 when he batted for Ryo Hirai and singled off Daiki Enokida. His first home run was off Tetsuya Utsumi. During 2013, he moved to second base and became the starter as the year wore on, replacing Hiroyasu Tanaka; he hit .283/.354/.357 in 94 games.

The Hyogo native took his game to the star level in 2014, hitting .324/.403/.539 with 39 doubles, 29 home runs, 106 runs, 89 RBI, 15 steals in 20 tries and 74 walks. He set a NPB record for hits by a right-handed batter with 193, topping Fumio Fujimura's 64-year-old mark of 191. The record-setting hit was a grand slam off Shun Yamaguchi. He was third in the Central League in average (after Matt Murton and Ryosuke Kikuchi), third in slugging (after Wladimir Balentien and Brad Eldred), tied Yoshihiro Maru for first in runs, led in hits (5 over Kikuchi), was 4th in OBP (between Takashi Toritani and Murton), tied Kikuchi for the lead in doubles, was third in home runs (after Eldred and Balentien), was 4th in RBI (between Yuhei Takai and Masahiko Morino) despite being a leadoff man, was 10th in steals (between Tsuyoshi Ueda and Masato Akamatsu), placed 4th in walks, was second to Balentien in OPS and easily led in total bases (321, 45 more than #2 Takai). He was named to the Best Nine as the CL's top second baseman and finished second in voting for the 2014 Central League Most Valuable Player Award, behind Tomoyuki Sugano; he was the lone position player to finish in the top four.

In the 2014 Nichi-Bei Series, he went 1 for 9 with a walk, splitting 1B with Ginji Akaminai as Japan beat the MLB All-Stars for the first time ever. He was 2 for 6 with four walks, a double and a home run (off Leslie Nacar) when Japan split a two-game series with the All-European team in early 2015.

2015 was even better than 2014 as Yamada produced at a .329/.416/.610 clip with 39 doubles, 38 home runs, 119 runs, 100 RBI, 34 stolen bases (only caught four times) and 81 walks while fielding .989 while playing every inning at second base. In 2015 NPB All-Star Game 1, he started at second and hitting third for the CL in a 8-6 win over the Pacific League. He grounded out against Shohei Otani in the first and struck out against Yuki Nishi in the third. Facing Hideaki Wakui in the 5th, he hit into a run-scoring error by Takeya Nakamura. Hector Luna pinch-hit for him in the 6th. In Game 2, he replaced Kikuchi at 2B for the CL and flew out against Shota Takeda. He won monthly MVPs awards three months in a row - July, August and September. He became the 9th 30-30 player in NPB history, the first since Kazuo Matsui in 2002 (though Yuki Yanagita in the PL would also turn a 30-30 season in 2015). He became the first player in NPB annals to lead the league in home runs and steals in the same season and was the first 30-30 man to lead in steals. He was the youngest 30-30 player in CL history. He broke Hiroki Kokubo's 18-year-old record for home runs by a Japanese second baseman in NPB; Greg LaRocca had the record for HR by a second baseman regardless of national origin with 40 but had spent about a third of that record-setting season at 1B, meaning Yamada almost definitely had the most by someone while they were stationed at 2B for the game. For the season, he was second in average (.007 behind infield mate Kawabata), led in OBP (.016 ahead of Yoshitomo Tsutsugo), led in slugging (.088 better than Tsutsugo), led in OPS by 106 over Tsutsugo, led in runs (32 more than Kawabata), was second in hits (183, 12 shy of Kawabata), led in doubles (4 ahead of Takayuki Kajitani), led in home runs (12 ahead of another infield mate, Kazuhiro Hatakeyama), was second in RBI (5 behind Hatakeyama), led in steals (six more than Kajitani), was third in walks (after Maru and Toritani) and led in total bases (340, 81 more than Tsutsugo). He led Yakult to their first Japan Series appearance in 14 years. After going 1-for-7 in the first two games of the 2015 Japan Series, he hit three home runs in game 3, taking Kenichi Nakata deep twice and Kodai Senga deep once to drive in five runs in Yakult's first win of the Series. He was the first player to have a three-homer game in Japan Series history. He did not have a hit in the last two games but still won the Fighting Spirit Award as the MVP of the losing team, with few other Swallows producing during the Series. He won another Gold Glove and Best Nine pick. He was an easy pick for 2015 Central League MVP, getting 262 of 270 first-place votes, 7 second-place and one third-place. His 1,332 vote points were well ahead of teammate Kawabata's 368 second-place total.

He is on the Japanese national team roster for the 2015 Premier 12. He scored 3 of their 4 runs in a win over the Dominican national team, scored three more in a win over Team USA (eventual runner-ups) and took Miguel Pena deep twice in a Bronze Medal game win over Mexico. He finished the event at .308/.526/.654 with 10 runs and 11 walks in 8 games. For the tourney leaderboard (which did not count the finale or Bronze Medal game), he was 5th in OBP, tied Tyler O'Neill for the run lead (he had the most counting the last two games) and led in walks by 4 (over Tsutsugo, Dan Black and Aldo Mendez). He did not make the All-World team as Adam Frazier was picked at 2B instead.

Yamada hit cleanup and played second for the CL in 2016 NPB All-Star Game 1, but struck out twice and went 0-for-3 against Tsuyoshi Wada, Ayumu Ishikawa and Takahiro Norimoto before Kikuchi took over at second base. In Game 2, he replaced Kawabata at 3B and was retired twice by Kohei Arihara. He remained a dominant player in 2016 - .304/.425/.607, 38 HR, 102 R, 102 RBI, 97 BB, 30 SB, 2 CS, .993 FLD%. He was the first 30-30 player in Japan to lead the league in steals. He tied Kosuke Tanaka for the league lead in runs, was second to Tsutsugo in HR (6 back), was second in RBI (8 shy of Tsutsugo), led in steals (two ahead of Kosuke Tanaka), led in walks (10 ahead of Tsutsugo), was 6th in average (between Kosuke Fukudome and Shuichi Murata), was 3rd in OBP (after Hayato Sakamoto and Tsutsugo), was 3rd in slugging (after Tsutsugo and Seiya Suzuki) and finished 2nd to Tsutsugo in OPS. He was named to the Best Nine at second base and was 7th in voting for the 2016 Central League Most Valuable Player Award, between Kris Johnson and Hiroki Kuroda.

He hit .296/.412/.593 in the 2017 World Baseball Classic, despite being robbed of one home run when umpire Cory Blaser said a fan had interfered with the play. He had four runs and three RBI in a win over Cuba, taking Vladimir Baños and Miguel Lahera deep. His three steals tied Yurisbel Gracial for second in the event, one behind Javier Báez. Had his one homer not been taken away, he would have tied for second there as well, one behind Balentien. Despite inferior offensive numbers, Báez beat him out for the All-Star second base spot.

Back in a Japan uniform for the 2019 Premier 12, mostly playing first base (a position he had never played in NPB) with Kikuchi manning second. He was 1 for 14 with four walks entering the last two games, then went 3-for-6 with two doubles, a homer, two walks, two runs and three RBI in those contests; in the finale, his 3-run homer off Hyeon-jong Yang was the big hit that gave Japan a 5-3 win over defending champ South Korea. He tied for 3rd in the event with 6 RBI (behind Suzuki and Bobby Dalbec) and tied for third in walks (behind Kensuke Kondoh and Esteban Quiroz).

In 2020, he had his second off-season at .254/.346/.419. He began 2021 better (though his old speed seemed to be gone), hitting 25 homers in his first 80 games. He made Japan's team for the 2020 Olympics (delayed to 2021 due to the COVID-19 pandemic). Leading off and usually playing DH (with Kikuchi at second base again), he hit a three-run homer off Mexico's Édgar Arredondo. With a 2-2 tie in the 8th against South Korea, he hit one off the top of the left field fence for a three-run double versus Woo-suk Go for the game-winning hit. In the 2-0 Gold Medal Game win against Team USA, he singled off Scott McGough and came around with the last run on an error. He had hit .350/.435/.600 with 7 RBI in five Olympic games, drawing 3 walks and even showing his old footspeed (3-for-3 in steals). He tied for 9th in the Games in hits (7), tied for 7th in doubles (2), tied for 2nd in RBI (even with Hyun-soo Kim, Tyler Austin and Danny Valencia, one behind Triston Casas, who played more games), tied Ryan Lavarnway and Masataka Yoshida for 9th in average, was 9th in slugging (between Sakamoto and Tyler Austin), ranked 9th in OBP (between Hyun-soo Kim and Hideto Asamura), was 8th in OPS (between Lavarnway and Murakami) and led in steals (the only others with multiple steals were Eric Filia and Isaac Rodríguez). While Austin won the All-Olympic spot at DH, Yamada was named the Olympic MVP; it might have been the first time an Olympic MVP was named in baseball. It was Japan's first Olympic Gold in baseball, having fallen close in the past (they had won in the 1984 Olympics, before baseball was a medal event).