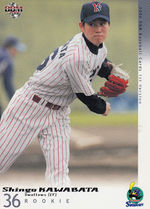 Kawabata was a third-round pick of the Yakult Swallows in 2005. He made his NPB debut October 9, 2006, replacing Hiroyasu Tanaka at 2B. His first hit came the next day off Kan Otake. He was 4 for 21 with two runs, a walk and a RBI for the year. He was 1 for 10 with a double, walk, run, RBI and six strikeouts in 2007, missing time with a broken injury. He had his first NPB homer late in 2008, taking Takashi Ogasawara deep for a 3-run shot. He hit .260/.294/.327 in 115 plate appearances over 65 games that year, backing up Shinya Miyamoto and Keizo Kawashima at SS and 3B (at both positions, Miyamoto led in games played, followed by Kawashima).

In 2012, he was Yakult's starting shortstop but also saw 44 games at 3B, where Miyamoto was still starting. Kawabata's batting line read .298/.348/.380. He was 7th in the CL in average (between Alex Ramirez and Kazuhiro Wada) and he tied Yohei Oshima for third with five triples. The injury bug bit once again in 2013 and he missed about two months after ankle surgery. He came back well, hitting .311/.393/.408 in 70 games and was MVP for September. Had he qualified, he would have been 5th in the CL in average, trailing only Shuichi Murata among Japanese natives. With Miyamoto now 42 years old, Kawabata became the starter at third, with Kawashima and Ryosuke Morioka taking over short.

Kawabata hit .305/.355/.421 in 2014, with 33 doubles and 86 runs. He was 10th in the CL in average (between Yoshihiro Maru and Wladimir Balentien), 8th in runs (between Ryosuke Kikuchi and Hayato Sakamoto), 5th in hits (177, between Matt Murton and Yuhei Takai) and 4th in doubles (between Masahiko Morino and Murton). He became the 10th player in the history of the CL to have four modashos (3 or more hits in a game); Murton had been the 9th to do so, a year prior. He was the first Swallows player to do it.

Healthy for a second consecutive season, he hit .336/.383/.439 with 34 doubles and 87 runs in 2015, forming a potent 2-3-4 punch in the Swallows lineup with MVP, home run king and 30-30 man Tetsuto Yamada and RBI leader Kazuhiro Hatakeyama following him. They manned the three bases for the Swallows, with Yamada at 2b and Hatakeyama at 1B. Kawabata hit 7th in 2015 NPB All-Star Game 1, lining out against Shohei Otani, grounding out against Yuki Nishi and singling off Hideaki Wakui to score Jose Lopez in a 8-6 CL win over the Pacific League; Hector Luna replaced him at third and Kikuchi replaced him in the batting order. In Game 2, he replaced Luna late in a 12-8 win, grounding out versus Shota Takeda in the 7th. He led the CL in average (.007 over Yamada), was 3rd in OBP (after Yamada and Yoshitomo Tsutsugo), ranked 6th in slugging despite only 8 homers (between Kosuke Fukudome and Ryosuke Hirata), was 5th in OPS (between Fukudome and Hatakeyama), was second in runs (a distant 32 shy of Yamada), led in hits (195, 12 more than Yamada), was 3rd with 34 doubles (after Yamada and Takayuki Kajitani) and led CL third baseman in putouts (88), assists (230) and double plays (27). He finished an easy second in voting for the 2015 Central League Most Valuable Player Award, well back of Yamada but well ahead of #3 Tony Barnette. He was picked to the Best Nine as the top third baseman in the CL and also won a Gold Glove there. He was named MVP of the Climax Series (semifinals) to help Yakult make their first Japan Series trip in 14 years. He scored Yakult's first run of the Series; in the 9th inning of game 1, he hit into an error by Kenta Imamiya and scored on a Hatakeyama homer, but was only 3-for-21 with 3 walks, two runs and a RBI in the Series, as Yakult fell in five games to the PL champ Softbank Hawks.

Kawabata then joined Samurai Japan for the 2015 Premier 12. He was used as a backup to Nobuhiro Matsuda at the hot corner (his lone start actually coming at DH rather than 3B), going 2 for 7 with a double, walk and run while handling three error-free chances. Late in the Bronze Medal game, he batted for Matsuda and was retired by Edgar Correa as Japan rolled to a 11-1 win.