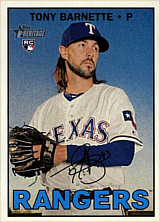 Tony Barnette was 39-27 in his first four minor league seasons, then jumped to Japan in 2010 and made his major league debut in 2016.

Barnette was 5-0 with 2 saves and a 1.66 ERA as a junior college freshman at Central Arizona College, then had a 7-1, 11 saves, 2.16 record as a sophomore. Transferring to powerhouse Arizona State University, he struggled as a junior, going 4-1 with two saves and a 7.02 ERA in 29 games. As a senior, he went 6-1 with a team-high 70 K. The Arizona Diamondbacks took him in the 10th round of the 2006 amateur draft. He was signed by scout Steve Kmetko and made his pro debut that summer.

Barnette signed with the Yakult Swallows in January 2010, for 50 million yen plus incentives. He debuted on April 2 with a strong outing, tossing 7 shutout innings of 3-hit ball with 11 strikeouts in a 1-0 win over the Yokohama BayStars and Hayato Terahara. The rest of the season did not go as well, as he finished at 4-5, 5.99. Yakult moved him to the bullpen for 2011 and the move paid off; he was 1-1 with two saves and a 2.68 ERA, fanning 54 in 47 innings. In 2012, he became Yakult's closer when Chang-yong Lim was injured. He had a great summer at 1-2, 1.82 with 33 saves (tying Hitoki Iwase for the league lead) and made the Central League All-Star team. In 2012 NPB All-Star Game 1, he relieved Tetsuya Yamaguchi in the 9th with a 4-1 lead. He gave up a double to Dai-Kang Yoh but then retired Katsuya Kakunaka, Nobuhiro Matsuda and Wily Mo Pena in order.

Barnette struggled in 2013 (1-8, 7 saves, 6.02) despite 62 strikeouts in 40 1/3 innings. He rebounded somewhat in 2014 (1-2, 14 saves, 3.34, 42 K in 32 1/3 innings). He was then dominant in 2015 (3-1, 41 saves, 1.29 in 59 games, 0.89 WHIP). He tied Seung-hwan Oh for the CL save lead and he and Oh tied Marc Kroon's 2008 record for most saves in a season in NPB by a foreign import hurler. In 2015 NPB All-Star Game 2, he relieved Yudai Ono with a 7-3 lead in the 8th. He allowed a Yuki Yanagita single but Dae-ho Lee hit into a double play and Matsuda whiffed. Oh took over in the 9th. In the 2015 Japan Series, he allowed one run in two innings as Yakult fell to the Softbank Hawks in five games. Barnette finished third in voting for the 2015 Central League Most Valuable Player Award behind teammates Tetsuto Yamada and Shingo Kawabata. Like Oh, he was rewarded for his 2015 success with a contract with a major league team, signing with the Texas Rangers, who had success in bringing over pitchers from NPB such as Colby Lewis and Yu Darvish.

At age 32, Tony made it to the major leagues. He relieved Martin Perez in the 7th with a 2-2 tie against the Seattle Mariners on April 5, 2016 to make his debut. Things did not go well as Seth Smith led off with a single. Barnette retired Chris Iannetta and Luis Sardinas but Leonys Martin doubled in a run and Nori Aoki singled in another; Jake Diekman relieved but Barnette would take the loss. Things went better after that, and he finished with an excellent ERA of 2.09 in 53 games and 60 1/3 innings. He was 7-3 with 49 strikeouts while walking only 16 as one of the Rangers' most reliable relievers. He pitched three times in the Division Series against the Toronto Blue Jays, giving up no runs in 4 innings. In 2017, he went 2-1, 5.49 in 50 games, recording his first 2 major league saves, then in 2018, he was limited to 22 games, twice going on the disabled list because of shoulder issues. His last appearance came on July 3. When he was able to pitch, he pitched well, going 2-0, 2.39.

On February 1, 2019, he signed a one-year contract with the Chicago Cubs with $750,000 in guaranteed money, but the possibility to obtain significant bonuses if he stayed healthy. Right shoulder inflammation sidelined him until June, and he pitched 1 1/3 innings with the big league club before declining a minor league assignment and winding up on the restricted list on July 1. He became a free agent at season's end. Tony announced his retirement on January 28, 2020.

Like many relievers, Barnette pitched exclusively from the stretch position. What was unusual about his pitching motion is that instead of coming set with his hands in front of his belt, or somewhere in the middle of his body as the vast majority of pitchers do, he put his hands on top of his right hip, as if he was trying to pull something out of his pants' pocket. He also rocked back and forth on his legs before coming to a pause and starting his motion towards the plate.