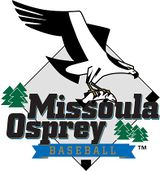 The Missoula Osprey began play in the Pioneer League in 1999 when the Lethbridge Black Diamonds relocated to Montana. For its entire existence, the club was an affiliate of the Arizona Diamondbacks, and they played their home games at Ogren Park at Allegiance Field (originally called Play Ball Park) in Missoula, Montana. In their inaugural season, the Osprey captured the league championship, and in 2006, they won another crown. After 21 seasons the team was rebranded as the Missoula PaddleHeads for 2020 - a season that was never played due to the Coronavirus pandemic.

In their first season, skipper Joe Almaraz led the Osprey to a league title after sweeping the Helena Brewers and Billings Mustangs in the postseason. First baseman Lyle Overbay hit .343 with 12 home runs and a league leading 101 RBIs, and catcher J.D. Closser smashed 10 homers while hitting .324. Closer Brian Matzenbacher saved 11 games while posting a 3.12 ERA out of the pen.

Under new manager Chip Hale, the Osprey posted the best overall record in their division in 2000 but did not reach the playoffs after finishing second in both halves of the season. Outfielder Victor Hall hit .307 and led the league with 47 stolen bases, and was joined on the All-Star team by Luis Terrero, who hit 8 homers.

Jack Howell took over as manager of the Osprey in 2002, but the club missed out on the playoffs. Brandon Simon provided one of the bright spots for the team, leading the league with 30 stolen bases (despite only hitting .215). William Juárez (6-2, 2.43) was second in the league in ERA.

The Osprey missed the playoffs again in 2003, posting identical 18-20 marks in both halves of the season for manager Tony Perezchica. Starter Angel Rocha went 5-8 with a 3.13 ERA while closer Alexander Cremidan posted a 1.38 ERA and led the league with 15 saves.

With Jim Presley taking over at the helm, the Osprey struggled in 2004, finishing in last place in their division in both halves of the season. Outfielder Jaen Centeno provided one of the few bright spots, hitting .296 and making the All-Star team.

In 2006, de la Cruz led the Osprey to a second place finish in both halves of the season, before sweeping Billings and the Idaho Falls Chukars to win the league championship. Outfielder Gerardo Parra led the offense with a .328 batting average. Pitchers Anthony Barnette and Osbek Castillo tied for the league lead with 6 victories apiece. Closer Daniel Stange also paced the circuit with 13 saves.

Under new skipper Damon Mashore, the reigning champs fell to last place in both halves of the season. Second baseman Taylor Harbin and outfielder Peter Clifford each hit 10 home runs to lead the club.