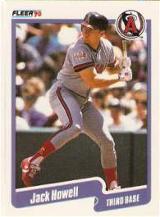 Jack Howell spent 11 seasons in the majors, interrupted by a four-year run in Japan. He also spent two full seasons and parts of some others in the minors. He hit over 200 homers as a professional baseball player and won one MVP award.

On August 6, 1983 Jack Howell was signed as an amateur free agent by the California Angels and scout Rick Ingalls. He was sent to the Northwest League (A Short Season) Salem Angels and Jack got in 21 games and 76 at-bats with 30 hits for a .395 average in the last few weeks of the season. Howell slugged .671 and had a .505 OBP in his short stint, scoring 23 runs, over one per game. Despite his limited playing time, his 5 triples were only 3 shy of the NWL lead. His only problem was defense - he fielded .750 at third with 8 errors in 11 games and .900 at second with 3 errors in 7 contests.

Howell began 1985 with the Edmonton Trappers and hit .373/~.500/.609 in 79 games. Had he qualified, he would have beaten out John Kruk for the Pacific Coast League batting and OBP titles and almost topped Danny Tartabull for the slugging lead. Despite only playing half the season, he was named the PCL All-Star third baseman. Baseball America rated him as the league's #3 prospect behind Jose Canseco and Tartabull and ahead of players like Kruk and Jose Rijo.

Howell spent a fair portion of 1985 with the Angels. He hit .197/.279/.336 in 43 games for the 1985 Angels, a far cry from his work at AAA that year. In his MLB debut, he hit 6th, ahead of veterans Bobby Grich and Bob Boone, and started at third base. He fanned against Walt Terrell in his first at-bat but walked twice and scored twice that day.

The Angels released veteran third baseman Doug DeCinces late in 1987 to give a position to lefthanded-hitting Howell, who had spent that season playing third, second, and the outfield and had hit 23 HR. One of those homers was a broken-bat shot in Yankee Stadium that confirmed for many that the 1987 ball was juiced up [citation needed]. Howell's batting line read .245/.331/.461 and he was third on the club in slugging behind Wally Joyner and Brian Downing. He was the team's most-used left fielder, not a position he played typically in his career.

Howell did not impress for the 1991 Padres, batting .206/.287/.350, though it was a better batting line than that produced by the man he replaced at third base, Scott Coolbaugh. A free agent, Howell was considering returning to San Diego to fight for the third base job but Doug DeCinces called him and asked if he would be interested in appearing for the Yakult Swallows. DeCinces had gone to Yakult after Howell had unseated him from the Angels job a few years prior.

Howell signed with Yakult for more money than he had made in the majors. He suffered a hamstring injury early in the 1992 season and returned to the USA briefly for medical treatment and to spend time with his wife, then pregnant with twins. Howell returned to Japan with his older son Josh in tow for the second half of the season. He tore the cover off the ball for the second half, setting a franchise record for homers in a month with 13 in August. He finished with a .331/.402/.685 batting line and 38 home runs in 113 games. He led the Central League in average (.006 ahead of Tom O'Malley), slugging (well ahead of the runner-up) and homers. Howell took home MVP honors and won Best Nine honors at third base. Howell was the first gaijin to win MVP honors in his first year in Japan.

In the 1992 Japan Series, Howell performed very poorly, going 4 for 30 with a double, 2 homers and 2 walks. He struck out 16 times to tie the Japan Series record and was a big part of why Yakult fell in 7 games to the Seibu Lions. He did deliver crucial home runs in wins in games 5 and 6 but later said the Series "ended on a sour note by my not doing so well in the series and the team being defeated in the seventh game."

In 1993, Jack batted .295/.420/.551 with 28 homers and 88 RBI. He hit for the cycle on July 29, the second foreigner to do so in CL history. It was his only triple of the season. He made the CL All-Star team for the only time and set a Nippon Pro Baseball record with five sayonara home runs in a season. He drew 86 walks (10 behind leader Hiromitsu Ochiai) and led the league with 8 sacrifice flies. He was six homers behind leader Akira Eto and 6 RBI behind co-leaders Katsumi Hirosawa and former Angel teammate Bobby Rose. Eto beat him out for Best Nine honors at third base. In the 1993 Japan Series, Howell hit .292/.433/.500 and Yakult won its second Japan Series ever, topping Seibu in 7 games. Only Tetsuya Iida had a better OPS for Yakult but the Series MVP went to pitcher Kenjiro Kawasaki instead of a hitter.

After Yakult did not pick up the option for Howell for 1995, he signed with the Yomiuri Giants. He batted .179/.388/.516 with 66 strikeouts in 219 AB, then left the team at mid-season. His wife had been ill and he was having difficulty dealing with all the stress. Being in the media-saturated Yomiuri clubhouse didn't help matters. Howell decided to leave baseball and returned to the USA. Tatsunori Hara replaced him at third base for the Giants.

After his life had settled down, Howell decided to return to the diamond. He contacted the Angels, who signed him once again. In 1996, he set a team record with four pinch-hit homers. But Howell always struggled badly against left-handed pitching, and he never advanced past a platoon role in his second major-league stint. He hit a solid .270/.324/.508 in 1996 for a 108 OPS+, excellent for a bench player and nearly as good as in his prime. Howell also played minor league baseball for the first time since 1990, going 2 for 12 with a double, homer and 3 walks for the Lake Elsinore Storm.

Jack was granted free agency in November of 1996 and re-signed as a free agent with the Anaheim Angels on December 20 of the same year. He batted .259/.305/.540 for a 114 OPS+ and homered 14 times in only 174 AB for the 1997 Angels. He had the team's best slugging percentage for someone who appeared in over 50 games, beating out players such as Tim Salmon, Jim Edmonds, Eddie Murray and Darin Erstad.

He also managed one season in 2002 in the Pioneer League with the Missoula Osprey. He was the hitting coach for Tucson in 2003. In 2004, he was the Arizona Diamondbacks organizational hitting coach. From 2005-2008, he has been field coordinator for the Diamondbacks minor league system. In 2009 and 2010, he was the D-Backs' hitting coach, then in 2011 moved to the Florida Marlins organization as their minor league hitting coordinator. After the season, he was hired by the Seattle Mariners to be their Minor League field coordinator. Howell returned to managing with the Burlington Bees in 2018-2019 and Inland Empire 66ers in 2021.