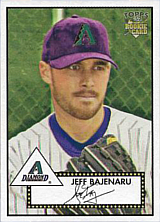 Beginning in 2005, Bajenaru was a member of SABR, one of the rare active players to have been a member of the organization.