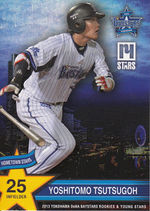 Yoshitomo Tsutsugo has been an All-Star slugger in Nippon Pro Baseball, then moved to Major League Baseball in 2020.

Tsutsugo hit 69 home runs in high school. He played for Japan in the 2009 Asian Junior Championship; they won a Bronze Medal. The Yokohama BayStars took him in the first round of the 2009 NPB draft. Despite a wrist injury, he set an Eastern League rookie record with 26 home runs in 2010 for the Shonan SeaRex and also led with 88 RBI. He was 5 home runs and 18 RBI ahead of runner-up Taishi Ota. He broke Naotaka Takehara's home run mark of 23. He made his NPB debut late in the year and went 1 for 7 with two walks; his first NPB hit was a two-run homer off Tomoyuki Kubota.

The Wakayama native blossomed in 2014, taking over left field from veteran Hitoshi Tamura. He produced at a .300/.373/.529 clip with 22 home runs and 77 RBI. He tied Jose Lopez for 6th in the Central League in dingers (only Tetsuto Yamada and Yuhei Takai had more among Japanese natives), ranked 8th in RBI, was 7th in OBP (between Hector Luna and Takai), placed 4th in slugging (after Wladimir Balentien, Brad Eldred and Yamada) and was 4th in OPS (after Balentien, Yamada and Yoshihiro Maru). He was a late addition to the NPB All-Stars for the 2014 Nichi-Bei Series, replacing the injured Akira Nakamura. Tsutsugo did very well, hitting .429 as NPB beat the MLB All-Stars for the first time ever in a Nichi-Bei Series. He tied Jose Altuve for the best average in the event.

In 2015 NPB All-Star Game 1, Tsutsugo started in left field and hit cleanup for the CL. He was the first player in NPB All-Star Game history to hit cleanup in their first All-Star Game and then get a hit in their first plate appearance, as he doubled off Shohei Otani in the second and scored on a hit by Lopez. In the third, his sacrifice fly off Yuki Nishi scored Yuhei Nakamura. Facing Hideaki Wakui in the 5th, he hit into a double play. He left in a double swithc, as Takahiro Suzuki took over in left and new catcher Tsubasa Aizawa took his spot in the lineup. The CL won the game, 8-6. In Game 2, he batted cleanup as the CL DH. He fanned in the first against Mitsuo Yoshikawa and in the 4th against Ken Togame In the 5th, though, he doubled off Togame to score Luna, then came home on a double by Takahiro Arai. The CL won again, 8-3.

He started 2016 even hotter than in 2015, slugging over .600 by late July including becoming the first player in NPB annals to have three straight multi-homer games.. Hitting cleanup for the CL in the 2016 NPB All-Star Games, he put on a show. In game 1, he homered off Takahiro Norimoto then doubled off Chris Martin to open the 7th but was stranded in a 5-4 win; he was named MVP, the youngest NPB All-Star Game MVP from the BayStars, breaking Yutaka Takagi's 31-year-old record by over two years of age. In game 2, he kept it up. He homered off Hideaki Wakui to open the scoring, then added a single off Yuji Nishino in the 6th in a 5-5 tie for another 2-for-3-with-a-homer day. He lost MVP in game 2 to Otani. He had his career year (through 2019): .322/.430/.680, 44 HR, 87 BB, 89 R, 110 RBI. He was 6th in the CL in runs, tied Hayato Sakamoto and Hisayoshi Chono for 3rd in doubles (28), led in homers (6 ahead of Yamada), led in RBI (8 more than Yamada), was 2nd in walks (10 behind Yamada), ranked 3rd in average (afrer Sakamoto and Seiya Suzuki), was 2nd in OBP (.003 behind Sakamoto), led in slugging (.068 ahead of Seiya Suzuki), led in OPS (78 ahead of Seiya Suzuki) and led in total bases (319, 27 ahead of Yamada). He joined Maru and Seiya Suzuki as the Best Nine picks in the outfield in the CL. He was 5th in voting for the 2016 Central League Most Valuable Player Award, the only player in the top five not from the first-place Hiroshima Carp.

Tsutsugo dazzled in the 2017 World Baseball Classic, hitting .320/.433/.680 with 3 homers and 8 RBI in 7 games. He was named Pool B MVP after socking homers against Jonder Martinez of Cuba and Jon Kennedy of Australia. His solo homer off Dylan Axelrod in the 6th broke a scoreless tie with Israel. He tied Sho Nakata and Didi Gregorius for 3rd in the event in RBI and tied for 2nd in homers (with Alfredo Despaigne, Nelson Cruz, Nakata, Carlos Correa and John Andreoli), one behind Balentien. In 2017 NPB All-Star Game 1, he flew out against Kodai Senga but homered off Yusei Kikuchi to give him homers in five straight All-Star Games, tying the record held by Hideki Matsui and Takeshi Yamasaki. He struck out against Taisuke Yamaoka in his last at-bat before Maru replaced him in left. In Game 2, he was the DH but went 0 for 3 against Norimoto, Manabu Mima and Kota Futaki.

The 26-year-old continued his All-Star homer heroics in 2018. In 2018 NPB All-Star Game 1, he hit cleanup for the CL in a 7-6 loss and hit a two-run homer off Yoshinobu Yamamoto to tie it at 5 in the 3rd. He also flew out against Kikuchi in the 1st, singled off Naoki Miyanishi in the 6th and grounded out against Tatsuya Uchi in the 8th. He was the DH and hit cleanup in Game 2, a 5-1 loss; he struck out against Takayuki Kishi and drew a walk from Andrew Albers before Yamada replaced him. In 2018, he batted .295/.393/.596 with 77 runs, 33 doubles, 38 homers, 89 RBI and 80 walks. He was 4th in the CL in doubles (between Toshiro Miyazaki and Seiya Suzuki), tied Balentien for 3rd in home runs, tied Yamada for 7th in RBI, was 6th in walks (between Balentien and Yoshio Itoi), was 4th in slugging (between Seiya Suzuki and Yamada), placed 5th in OPS (between Neftali Soto and Dayan Viciedo) and was 2nd with 295 total bases (10 shy of Yamada). He did not crack the Best Nine; Maru, Soto and Seiya Suzuki were the outfielders chosen. He got one third-place vote for the 2018 Central League Most Valuable Player Award. He played for Japan in the 2018 Nichi-Bei Series.

He was 3 for 7 in the 2019 NPB All-Star Games, with yet another All-Star dinger, this one off Kona Takahashi in Game 2. He got one second-place vote for the 2019 Central League Most Valuable Player Award and was again left off the Best Nine (Soto, Maru and Seiya Suzuki repeated) after hitting .272/.388/.511 with 29 circuit clouts, 74 runs, 79 RBI and 88 walks in 2019. He was down to 8th in the CL in home runs, was 3rd in walks (behind Yamada and Seiya Suzuki), tied Maru for 5th in OBP, was 6th in slugging (between Soto and Viciedo) and 6th in OPS (between Soto and Maru). On November 19, 2019, he was posted by his team, the Yokohama DeNA BayStars, with the hope of attracting interest from a team in Major League Baseball. On December 13th, it was reported that the Tampa Bay Rays had reached a deal that would pay him $12 million for two years, with a further $2.4 million going to his former team as the release fee.

He started at third base for the Rays in the first game of the season on July 24, 2020, batting third. In the 5th inning, he took Hyun-Jin Ryu of the Toronto Blue Jays deep for his first major league homer. Splitting time between LF, 3B and DH, he hit .197/.314/.395 with 8 homers and 26 walks in 51 games for a 97 OPS+, not bad but not what one wants from a DH and corner outfielder. He was 2 for 13 in the first three rounds of the postseason as the Rays moved on to the 2020 World Series, but hardly saw any action in the Fall Classic, going 0 for 3 as the rays lost to the Los Angeles Dodgers. He was back with the Rays at the start of the 2021 season, but failed to get his bat going, hitting just .167 with no homers in the first six weeks while 1B Ji-Man Choi was out with an injury. When Choi was about to return from the injured list, the Rays sent Yoshi to the Los Angeles Dodgers on May 15th, in return for future considerations.