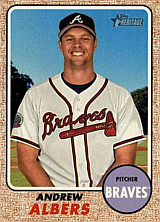 Andrew Albers pitched in the majors and for Team Canada. He won the Gold Medal game in the 2011 Pan American Games, Canada's first Gold in a global baseball tournament, and repeated with the 2015 Gold Medal-winning team. The prototypical crafty left-hander, his fastball tops out at only 86 mph and is complemented by a slow curveball that he throws around 67 mph. He compensates for the lack of raw stuff with outstanding control and a great understanding of the art of pitching, keeping batters off-balance by changing speeds and location and hitting his spots.

Albers was excellent for the 2008 AZL Padres: 7 innings, 3 hits, a skinny unearned run and 7 strikeouts. His season ended early due to an elbow injury that resulted in Tommy John surgery and the Friars released him in early 2010. Signing with the independent league Les Capitales de Québec, he showed he was still a top hurler, with a 3-0, 1.40 record in 40 games. Andrew saved 17 games, fanned 59 in 57 2/3 innings and had a WHIP under 1. He tied former major leaguers Juan Padilla and Duaner Sanchez for second in the Canadian-American Association in saves, one behind leader Romas Hicks and was named the circuit's All-Star relief pitcher.

That kind of performance earned him another look in Organized Baseball as the Minnesota Twins signed him. He did well in 2011, splitting time between the Fort Myers Miracle (4-1, 4 saves, 1.55, 7 walks in 52 1/3 innings) and the New Britain Rock Cats (4-1, 2.91, 7 walks in 43 1/3 innings). That brought his record in 80 games as a pro to 12-2, 21 saves, 1.80. Albers was put on the Team Canada roster for the 2011 Baseball World Cup and 2011 Pan American Games. In Canada's World Cup opener, he faced a Puerto Rican national team with three former major leaguers (Hiram Bocachica, Luis Figueroa and Jesus Feliciano) as well as top prospect (Reymond Fuentes). Albers allowed a leadoff single to Fuentes but allowed no more hits over the next five innings. He left with a 4-0 lead, relieved by Mike Johnson; Albers got credit for the win. He later tossed solid relief against Taiwan and in a Canadian win over the eventual champion Netherlands (3 perfect innings). He blanked South Korea for five innings before Dustin Molleken wrapped up the shutout. He finished the event 2-0 with no runs and 7 hits in 15 innings, the top starter on the Bronze Medal winners. He failed to make the tournament All-Star team as Hyoun-taek Oh was picked as the top starting pitcher. In the Pan American Games, he again starred for Canada, with one run and 10 whiffs in 9 2/3 innings. In the Gold Medal game, he helped Canada win its first major international baseball competition by beating Team USA and Andy Van Hekken, 2-1. He struck out 8 in 6 2/3 innings and allowed only one run (Brett Carroll driving in A.J. Pollock) before being relieved by Scott Richmond.

He was primarily a starter in 2012 with the GCL Twins (1-0, 1 run in 4 2/3 innings) and New Britain Rock Cats (4-3, 3.75). He continued his good work for the Canadian team in the 2013 World Baseball Classic Qualifiers held in Germany in September 2012: pitching the game that clinched a spot for Canada in the 2013 World Baseball Classic, defeating Germany 11-1, while giving up one run (a solo homer by Aaron Altherr) on two hits in 6 innings. He pitched once in the WBC, with three innings in relief of Chris Leroux in Canada's only win of the tournament, 10-3 over Mexico, on March 9th. He gave up six hits and two runs.

He started 2013 very well for the Rochester Red Wings (11-5, 2.86) and was called up when fellow Canadian Scott Diamond was demoted. Albers was a winner in his major league debut for the Twins on August 6, 2013. He was outstanding, throwing 8 1/3 scoreless innings against the red hot Kansas City Royals, who had won 12 of their last 13 games. He tired in the 9th and, having thrown 109 pitches, was taken out, missing a chance at becoming the first Twins pitcher ever to throw a shutout in his big league debut. He was still credited with the 7-0 win as reliever Casey Fien recorded the game's last two outs on a double-play grounder. He became the first major leaguer from Saskatchewan since Terry Puhl played his last game back in 1991. In his second start against the Cleveland Indians on August 12th, Albers did even better than his debut. He retired the first 11 batters of the game and limited his opponents to a pair of singles as he tossed a masterful 3-0 complete game shutout. He finished 2-5 with a 4.05 ERA for the 2013 Twins, with only 7 walks in 60 innings. Despite spending the last month in the majors, he tied Graham Godfrey and Ethan Martin for 4th in the 2013 IL in wins and was 5th in ERA (between Jose Alvarez and Yohan Pino). Among Twins farmhands, only D.J. Baxendale won more games.

Albers signed with the Korea Baseball Organization's Hanwha Eagles for 2014 but was only 6-13 with a 5.89 ERA; in a high-offense season, he gave up 200 hits in 151 1/3 innings. He was second in the KBO in losses, behind only Kyung-eun Noh. He returned to North America in 2015; through mid-July, he was 2-9 with a 4.40 ERA for the Buffalo Bisons and had allowed one run in 2 2/3 innings in a brief stint with the Toronto Blue Jays. He joined Canada for the 2015 Pan American Games, posting a 2.84 ERA in three relief decisions as Canada repeated as Gold Medalists. Previously, only Cuba had won more than one baseball Gold in the Pan American Games, let alone two in a row. His first outings were nearly identical. He relieved Leroux with a 4-0 lead in the 7th against the Dominican national team. He gave up a homer to Pedro Feliz then retired six batters in a row before Jeff Francis closed out the win. In his second game, he relieved Shawn Hill with a 3-0 lead in the 7th against the Cuban national team and allowed an Alfredo Despaigne homer, then retired six in a row before Francis saved it. Thankfully, things played out differently in the Gold Medal game. He relieved Francis with a 4-4 tie in the 8th and worked 2 1/3 shutout innings before Leroux wrapped up a 7-6 win (the US scoring two in the 10th, and Canada three runs).

Albers started 2016 with the Lancaster Barnstormers of the Atlantic League. He was purchased back by the Twins in April and returned to the bigs for 6 appearances (2 starts) with middling results (5.82 ERA, 27 hits allowed in 17 innings). In 2017, Albers went 12-3 for the Gwinnett Braves, the AAA affiliate of the Atlanta Braves, before being traded to the Seattle Mariners on August 11th. With the M's, he recorded his first big league win in four years on August 15th when he defeated the Baltimore Orioles, 3-1 after having been called up earlier in the day. He won again in his next game on August 21st, defeating the Braves, 6-5, and also collected his first major league hit and RBI in his first big league at-bat. He recorded his first career save on September 25th, when he preserved a 7-1 win over the Oakland Athletics with three shutout innings in relief of Felix Hernandez. Overall, he was 5-1, 3.51 with 1 save in 9 games. Following the season, he was released by the Mariners to allow him to accept an offer to pitch for the Orix Buffaloes of the Japanese Pacific League.

He was 9-2 with a 3.08 ERA in 2018, walking 21 in 114 innings. Had he qualified, he would have tied Yusei Kikuchi for 2nd in the PL in ERA, behind Takayuki Kishi. He won 2018 NPB All-Star Game 2, relieving Kishi in the third of a 0-0 game. He retired Seiji Kobayashi, Hayato Sakamoto, Nori Aoki and Tomotaka Sakaguchi. With one out in the 4th, he walked Yoshi Tsutsugo and allowed a Seiya Suzuki single but Wladimir Balentien hit into a double play. After the CL scored in the 5th, Ayumu Ishikawa relieved.

He fell to 2-6, 5.83 for Orix in 2019 and 4-8, 3.94 in 2020. He tied for 2nd in the 2020 PL in losses, one behind Kohei Arihara. He was signed by the Twins for 2021 but began badly for the St. Paul Saints (1-2, 7.11 ERA). He then returned to Team Canada, for the 2021 Americas Olympic Qualifier. He dazzled in the opener against Colombia; after plunking the 2nd batter, Jeter Downs, he retired 20 in a row. Brendan McGuigan and Ben Onyshko completed the no-hitter; it is unclear if it was Canada's first no-hitter in a male's international tournament (Anne-Sophie Lavallée had pitched one for the women's team). He returned to St. Paul after the tournament and did a lot better, finishing the year at 8-4, 3.88. His strong performance earned him a return ticket to the big leagues, as he made 5 appearances back with Minnesota in August and September of 2021, going 1-2, 7.58; he gave up 9 walks and 24 hits in 19 innings.