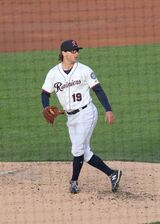 Ben Onyshko has pitched as high as AAA and has been on the Canadian national team.

Onyshko made Canada's squad for the 2020 Americas Olympic Qualifier (held in 2021 after delays due to the COVID pandemic). He made history in his debut, relieving Brendan McGuigan in the 9th with a 7-0 lead against Colombia after Andrew Albers and McGuigan had pitched no-hit ball to that point. He struck out Jesus Marriaga and walked Brayan Buelvas then Derwin Pomare hit into an error to put men on the corners and the shutout at risk. Onyshko sealed the shutout and no-hitter by striking out prospect Jeter Downs and getting Jordan Diaz on a grounder. His next outing was versus Venezuela. Relieving McGuigan with a 5-0 deficit in the 7th, one on and two out, he struck out Diego Rincones. In the 8th, he went 1-2-3 against Alexander Palma, Ramón Flores and Yonny Hernández. He led Canada in ERA in the event; Will McAffer and John Axford were also at 0.00, but in fewer innings. Canada did not qualify for the 2020 Olympics. [3]