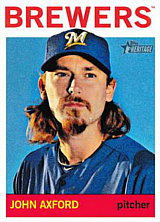 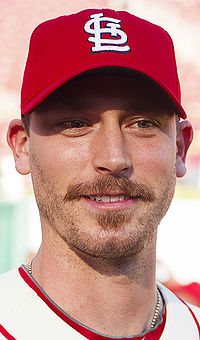 John Axford was a big league reliever and the 2011 National League Rolaids Relief Man with the Milwaukee Brewers.

Axford began his college career at University of Notre Dame, undergoing Tommy John surgery in December 2003. He sat out 2004 and most of 2005 before transferring to Canisius College, going undrafted after a so-so senior season. He dominated a collegiate summer league in Canada and was signed by scout Mike Gibbons for the New York Yankees. Axford spent one season in the Yankees' chain at four different levels, including Triple A,but was released after the season. He hooked on with the Milwaukee Brewers the next spring, 2008, and was sent to the Brevard County Manatees, making his major league debut with the Brewers at the tail end of the 2009 season.

Axford became the closer of the Brewers as a rookie in 2010, replacing a struggling Trevor Hoffman­. He went 8-2, 2.48, saving 24 games while striking out 76 in 58 innings. In 2011, he had an even more outstanding season, saving a National League-leading 46 games as the Brewers were NL Central champions. He pitched 74 games with a record of 2-2, 1.95, and struck out 86 in 76 1/3 innings. He managed to keep his job even though the Brewers acquired Francisco Rodriguez, the all-time single-season save leader, at the trade deadline. Ax won a game and recorded a save in three appearances against the Arizona Diamondbacks in the NLDS, then had a pair of saves when the Brewers lost to the St. Louis Cardinals in the NLCS. Overall in the postseason, he gave up a single run in 7 innings, giving up 5 hits and 2 walks and striking out 9. After the season, he was named co-winner of the Tip O'Neill Award, given to the most outstanding Canadian baseball player; he shared the honor with Joey Votto of the Cincinnati Reds.

Axford converted 49 consecutive save opportunities in 2011 and early 2012, the fourth-longest streak in the history of the save statistic. The streak ended on May 11th, when he blew a one-run lead against the Chicago Cubs. The game went on for a number of innings yet, with the Brewers winning, 8-7, in 13 innings, but John immediately left the ballpark after hearing that his wife Nicole had gone into labor, six weeks before the due date of the couple's second child. She had been watching the game from the stands (luckily, with her physician nearby) and was rushed to the hospital, where doctors were able to stop her contractions and prevent a premature birth. John left a hand-written note to reporters that became a sensation across the continent: "I put my wife into contractions with my performance tonight! The streak is over so now you can talk about it. The luck I've had in the past didn't show up tonight! All I can do is start another streak and keep my head up! Cliché... cliché... cliché... another cliché. Gotta go! Love, Ax." However, he began to struggle badly starting in June, when he was charged with 3 blown saves and 2 losses, and it continued into July. On July 16th, he gave up 3 runs in two-thirds of an inning in blowing a save and suffering a loss to the Cardinals, bringing his record on the year to 2-6, 5.35 with 16 saves in 39 games. After the game, manager Ron Roenicke announced that set-up man Rodriguez would be given 9th-inning duties while Axford would attempt to regain his confidence in lower-pressure situations. In his first game in his new role on July 18th, he entered a game against the Cardinals in the 5th, picked up four outs and wound up winning pitcher when Rodriguez saved the Brewers' 4-3 win with a sweat-inducing 9th inning performance. He ended the year with 35 saves, but his peripheral stats were well down from his previous season: his record was 5-8, his ERA 4.67, although he did strike out 93 batters in 69 1/3 innings.

Axford played with Team Canada in the 2013 World Baseball Classic (allowing one run in 1 2/3 innings) and was still the Brewers' closer when the 2013 season started, but he quickly lost the job with a series of poor performances in the early going: his ERA stood at 24.30 after 4 appearances. Replacing him was his teammate on the Canadian national squad, Jim Henderson, while he assumed set-up duties. The change worked wonders, as the Brewers went on a nine-game winning streak in mid-April, with both Canuck relievers pitching very well in their new roles. He ended up pitching 62 times for the Brew Crew, with a record of 6-7, 4.45. On August 30th, he was traded to the St. Louis Cardinals for Michael Blazek. He pitched well down the stretch, going 1-0, 1.74 in 13 games for the Cards. In the postseason, he pitched twice in all three rounds of the playoffs, giving up a single run in 5 1/3 innings while striking out 9. That included two scoreless appearances in the 2013 World Series against the Boston Red Sox. On December 16th, he signed a free agent contract with the Cleveland Indians, who projected him to be the replacement for departed closer Chris Perez. He did not pitch badly for Cleveland, putting up a 3.92 ERA in 49 games, with a 2-3 record and 10 saves. In 43 2/3 innings, he allowed only 34 hits and struck out 51, but also allowed 30 walks as he struggled with his control at times. On August 14th, the Indians placed him on waivers, allowing the Pittsburgh Pirates to claim him simply by assuming the remaining portion of the salary owed him. He went 0-1, 4.09 in 13 games for the Bucs.

Axford signed as a free agent with the Colorado Rockies before the 2015 season. He missed a week of spring training when his 2 1/2-year-old son, Jameson, was bitten by a rattlesnake in the backyard of the house the family was renting in Arizona. The boy almost lost his foot, but doctors were able to save him. While John was supposed to be a set-up man for closer LaTroy Hawkins, he did not take long to record his first save for Colorado, as he did so against his old team, the Brewers, in the third game of the year on April 8th. Hawkins had blown a save opportunity in the 9th, but a pinch-hit homer by Wilin Rosario put the Rockies ahead in the top of the 10th and John kept the Brewers off the scoreboard in the bottom of the frame to earn the save. He commented after the game: "I don't usually have dedications to make but this save was dedicated to Jameson. (Catcher) Nick Hundley even yelled that this one is for Jameson." On April 12th, he was placed on family medical leave so that he could be with his son while he was being transferred from Arizona to a hospital in the Denver area. The news got better after that and ,a month later, Jameson was able to throw (sort of) the ceremonial first pitch at a Rockies game. While he was still confined to a wheelchair, his life was no longer in danger. As Hawkins' struggles were continuing, Axford inherited the team's closer spot and converted his first seven save opportunities. He finished with 25 saves, to go along with a 4-5 record and an ERA of 4.20, with over a strikeout per inning.

In 2016, he moved to the Oakland Athletics as a free agent and had another good season, going 6-4, 3.97 in 68 games with 3 saves and 15 holds. He struck out 60 batters in 65 2/3 innings. In 2017, however, he was just 0-1, 6.43 in 22 games for Oakland and was released on July 30th. He did not pitch again that year, but in February 2018, he signed a minor league contract with the Toronto Blue Jays and received an invitation to spring training. He made the Opening Day roster and, that July, became the 6th Canadian-born starting pitcher in team history, facing the minimum over a career-best 3 innings. He was dealt to the Los Angeles Dodgers at the deadline, struggling mightily in allowing 7 earned runs in 3 2/3rd innings. Another minor league deal with Toronto followed for 2019, only Axford suffered a stress reaction in his elbow during camp and later needed surgery to remove bone spurs, never seeing any action. He retired after that season, although it turned out to be just temporary.

In 2020, he worked as a guest in-studio analyst on postseason broadcasts on Sportsnet, alongside Joe Siddall and Jamie Campbell. He continued in the role in 2021 before he joined Team Canada for the 2020 Americas Olympics Qualifier. He did well enough there in June that it convinced the Blue Jays to offer him a minor league contract. He went 1-0, 0.84 in 9 games for the AAA Buffalo Bisons, then on August 2nd, his contract was sold to the Milwaukee Brewers, the team with which he had had the most success. He was immediately added to the big league roster, with coach Pat Murphy giving up uniform number 59, which John had worn in his glory years, so that he could wear it (Murphy switched to the unconventional 00). However, his comeback ended abruptly as in his first outing, on August 2nd, he retired only one of five batters he faced, then had to leave the game with pain in his elbow. He underwent an MRI which indicated serious damage, putting him on the shelf for the remainder of the season.

Axford is a big film buff. In 2014, he gained national recognition beyond baseball circles for his ability to predict the winners of the annual Academy Awards. Before the ceremony on March 2nd, he posted his predictions of winners and was correct in all 18 categories for which he made a guess, including technical ones such as sound editing, photography or costumes, in addition to the glamor acting and directing categories and others such as animated feature, adapted screenplay or best foreign film. He credits his father for introducing him to more diversified movie fare than the average teenager sees when the two were together on long road trips during the time Axford was playing youth baseball. His degree from Notre Dame was in film and television. He had been only a couple of picks short of perfection picking winners in previous years, but his perfect score in 2014 turned him from movie fan to movie expert, especially as his picks were not simply guesses, but justified by knowledge of what he was talking about.

He continued to post remarkably accurate predictions over the next few years, including going 19 for 24 in 2017, when he would have gone 20 for 24 had the snafu over the Best Film winner not been corrected (he had picked La La Land, which was first announced as the winner at the ceremony, before the embarrassing mistake was corrected and Moonlight was honored instead). He explained that he had preferred the actual winner as a movie and was pleased that it won the Oscar, but had based his incorrect prediction on past trends. A few days before the ceremony, he had arranged for Mahershala Ali, an Oakland native who won Best Supporting Actor for his role in Moonlight, to attend a special screening of the film for his A's teammates, and also pushed to have him throw the ceremonial first pitch at a game at the O.co Coliseum later that summer.