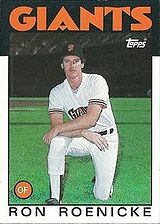 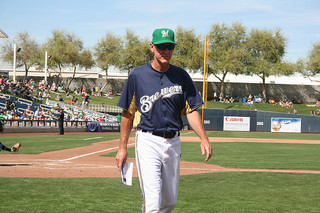 In 1990, Roenicke along with his brother Gary, played for the San Bernardino Pride of the Senior Professional Baseball Association. He played in 25 games batting .274 with 21 RBI and was tied for the league home run title with Butch Benton and Rick Lancellotti with 5 long balls when the SPBA folded.

After his playing career ended, he was a coach for the Los Angeles Dodgers in 1992 and 1993 and a minor league manager for the Dodgers (1994-1995 and 1997-1998) and San Francisco Giants (1999). Roenicke was also a coach for the Albuquerque Dukes in 1996. From 2000 to 2010, he was a Los Angeles Angels of Anaheim coach. He was named to succeed Ken Macha as manager of the Milwaukee Brewers for the 2011 season on November 2, 2010. In his first season as manager, he led the Brewers to the NL Central division title, the team's first finish in first place since moving to the National League in 1998. He also led them to their first victory in a postseason series since their World Series run in 1982 when they defeated the Arizona Diamondbacks in 5 games in the NLDS. However, the team's excellent run ended when they faced the underdog St. Louis Cardinals in the NLCS; they lost to the eventual World Champions, 4 games to 2.

In 2014, the Brewers got off to a fast start and were leading the NL Central by a comfortable margin in mid-season, before utterly collapsing in the second half. They ended up only two games above .500, at 82-80, and missed the postseason altogether. They then got off to the worst start in the major leagues in 2015 and Roenicke paid the price on May 3rd, when he was fired with the team sporting a 7-18 record. Former Brewers player Craig Counsell was named to replace him the following day. On August 17th, he was hired by the Los Angeles Dodgers to replace Lorenzo Bundy as their third base coach. He stayed until the end of the season, then in 2016, returned to the Angels as third base coach. That year, he also coached for the New Zealand national team in the 2017 World Baseball Classic Qualifiers.

In 2018, he was appointed bench coach of the Boston Red Sox under new manager Alex Cora and the team had a historic season, winning the 2018 World Series and setting a team record for wins. However, that victory was tainted when after the 2019 season, it was revealed that the Red Sox had used a sophisticated and illegal sign-stealing scheme during the season, in the wake of the 2017 Houston Astros, for whom Cora had been the bench coach, having done the same thing. Cora was fired for his role, and Roenicke emerged as the favorite to succeed him as manager - although the team had to wait for Major League Baseball to complete its investigation into the Boston half of the scandal before being able to do so. His nomination was confirmed on February 11, 2020, with spring training just around the corner, although it was initially only as an interim replacement for Cora. When the Commissioner issued his findings on April 22nd, confirming that the Red Sox had utilized illicit means to steal signs and determining appropriate punishment, Roenicke's interim tag was lifted. At that time, however, all play had been suspended because of the coronavirus pandemic. When the season finally started, it was a disaster for the Red Sox, as they were unable to find any reliable starting pitching and quickly sank to the bottom of the standings, never to re-emerge. Just before the Sox played their final game on September 27th, team President Chaim Bloom announced that Roenicke would not be back in 2021.