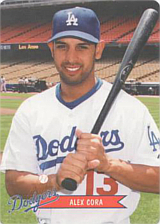 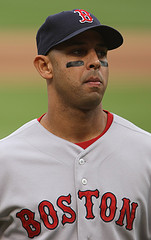 Alex Cora was an infielder in fourteen big league seasons, seeing his most action with the Los Angeles Dodgers. The brother of Joey Cora and son of José Cora Sr., Alex later transitioned into the coaching game, skippering the Boston Red Sox to the 2018 World Series before being caught in the epicenter as a key part of the Houston Astros "cheating" in 2017.

Alex was originally drafted by the Minnesota Twins in the 12th round (345th overall) in the 1993 amateur draft, but did not sign. After shining at the University of Miami, earning All-Tournament Team honors in the 1995 and 1996 College World Series, he was drafted again by the Los Angeles Dodgers in the 3rd round (88th overall) of the 1996 amateur draft. Among all players drafted in that round, Cora appeared in more major league games than any of them.

After parts of two seasons in the minors, Alex reached the bigs in June 1998, debuting in an interleague contest against the Seattle Mariners, whose starting second baseman just happened to be big brother Joey Cora. He became a more featured fixture in 2000 with his bat finally catching up in 2002, a season in which he hit .291/.371/.434 in 115 games. Cora became the primary second baseman in 2003, belting a career-high 10 home runs in 2004. On May 12th of that season, he battled Matt Clement of the Chicago Cubs to an 18-pitch at bat, winning the duel decisively with a two-run homer in a 4-0 LA victory. In his final Dodger action, he hit only .133/.188/.267 in an NLDS loss to the St. Louis Cardinals.

In free agency, Cora moved to the Cleveland Indians for the 2005 season, but the Indians promptly unloaded him on the Boston Red Sox in July in return for Ramon Vazquez. Though he never played in 100 games again, he became a valuable role player, coming on later in games on defense or spelling infielders in need of a break. He was part of the BoSox world champion club in 2007 and made three starts at shortstop during the club's 2008 march into the ALCS. In his final three seasons, he was a contributor with the New York Mets and Washington Nationals, playing four games with the AL champion Texas Rangers in 2010. In retirement, he became the General Manager of the Criollos de Caguas in the Puerto Rican League in 2012, leading the team to the 2013 Caribbean Series in his first year in the job. In 2013, Cora announced Super Regional games for ESPN.

For 2017, Cora was named bench coach of the Houston Astros. While the Astros were playing in the postseason, he emerged as a leading candidate for a number of managerial openings. On October 22nd, the day after the Astros qualified for the 2017 World Series, he was hired to manage the Boston Red Sox, staring in 2018. He led the Red Sox not only to a division title in his first season but also the best record in baseball and the most wins in the history of the franchise. He then guided the Sox through a brilliant postseason, in which they lost only one game in each of the three series they played, to win the 2018 World Series, defeating the Los Angeles Dodgers in the Fall Classic. He was rewarded after the season with a new contract lasting until 2021 with an option for 2022.

On April 9, 2019, when the Red Sox played their home opener against the Toronto Blue Jays, it marked the first time two Puerto Rican managers faced each other; Toronto was managed by Charlie Montoyo. The Red Sox started slowly and could never regain the magic of the previous season, finishing in third place behind their traditional rivals the New York Yankees and the upstart Tampa Bay Rays, well out of the postseason picture. After the season, baseball was rocked by a sign-stealing scandal that first focused on the 2017 Astros but later encompassed the 2018 Red Sox. Cora was the link between the two teams, who were both accused of using technology (center field cameras in Houston's case, and the video review room in that of Boston) to relay opponent signs to batters. When Astros manager A.J. Hinch was handed a one-year suspension for his role in his team's scheme, it became extremely likely that Cora was next in line to suffer the wrath of MLB. Before MLB could render its verdict, the Red Sox's top brass met with Cora on January 14th and came to an agreement it was best for everyone that Cora leave his job immediately. On April 22, 2020, Commissioner Rob Manfred officially suspended Cora for the entirety of the season, whether or not one would be played.

Coach Ron Roenicke took over as manager of the Red Sox in 2020 for a season shortened to 60 games, but the team was not competitive, finishing dead last in the AL East. Roenicke was dismissed at the end of the season, and rumors started to emerge that his successor would likely be Cora, a possibility made stronger when the Detroit Tigers decided to name A.J. Hinch as their manager as soon as his suspension ended when the World Series were completed. On November 6th, various news sources reported that Cora's appointment was imminent, something that was confirmed before the end of the day. He was given a two-year contract. The main difference with his first stint was that he now had to shepherd a rebuilding team, and not to get a winner over the hump.