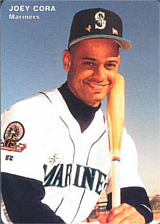 “Before he was chosen, we were all asked if Joey Cora was an All-Star, and we all said he deserves to go. He’s worked hard at this sport. He’s a quiet player, but he’s a spark plug. It is fun just to watch him every day, diving for balls, hustling." - Ken Griffey Jr., 1997

All-Star infielder Joey Cora played eleven seasons in the majors. He was a vital contributor to the 1995 Seattle Mariners club that saved big league ball in the Pacific Northwest. His father José Cora Sr. was a scout.

Joey was a first rounder of the San Diego Padres and Bill McKeon in the 1985 amateur draft, having excelled during his tenure at Vanderbilt University. In the summer of 1984, he hit .373 with 28 stolen bases for the Chatham A's of the Cape Cod Baseball League, earning MVP honors and, eventually, induction into the league's Hall of Fame in 2017. During his minor league tenure with the Double A Beaumont Golden Gators, Cora was stabbed outside the San Antonio Missions ballpark while waiting outside the team bus on the evening of June 22, 1986. Taking blows to the stomach and arm, he made a full recovery after a six-week layoff, impressively finishing the season with a .305 average and 24 steals.

Everything came together in Seattle, for both the club and Joey, that year. Joey hit .297/.359/.372, scorching the AL in August in batting .392 with 10 extra-base hits and 10 RBI as the club went down to the wire with the California Angels, winning a one-game playoff for the AL West title. In the decisive Game 5 of the M's very first playoff series, the Division Series against the New York Yankees, the series-winning rally began with Joey. He bunted for a base hit against Jack McDowell to lead off the bottom of the 11th inning, diving safely into first base, then moved to third on Ken Griffey Jr.'s ensuing single and scoring on The Double. He enjoyed his finest postseason series in that ALDS, hitting .316/.409/.526 with a home run, a double and seven runs scored, falling to a .136 average in a loss to the Cleveland Indians in the ALCS.

Joey enjoyed three more solid seasons in the bigs. He batted .291/.340/.417 with 37 doubles in 1996 and did his finest work in his penultimate season, hitting .300/.359/.441 with a career best 40 doubles, 11 homers, 105 runs scored and 172 hits. He established a Mariner best hitting streak (24 games) and made his lone appearance at the All-Star Game. His final season, 1998, was perfectly acceptable (.276/.357/.370) and a split season affair; on August 31st, he was acquired by the Cleveland Indians for their pennant push, but failed to make much of a dent with the bat in their powerful lineup, hitting .229. He did play regularly in the postseason, however. After failing to catch on with the Toronto Blue Jays in 1999, he called it a career.

After his playing days, Joey spent 2000 as hitting coach of the Daytona Cubs and three seasons as a minor league manager before joining the Chicago White Sox as third base coach in 2004. After three years, he became the club's bench coach. When manager Ozzie Guillen resigned suddenly with two days to go in the 2011 season to accept the Miami Marlins' job for 2012, Cora was expected to take over as skipper for the last two games. Instead, he was let go amid rumors that he had already agreed to join Guillen in Miami the following season. Indeed, shortly thereafter, Guillen named him the Marlins' bench coach. His fate being tied to Guillen's, he was fired after Ozzie's single stormy season in Miami. Cora moved into the broadcasting business in 2013 as a MLB Network baseball analyst.

Cora joined the Pittsburgh Pirates organization in 2016 taking the helm of their Double A affiliate, the Altoona Curve. In 2017, Cora became the third base coach for the big league Bucs and remained in that role until the 2021 season, after which he was let go. He then joined the New York Mets as third base coach in 2022.

Cora also has some experience with winter league baseball. He was the general manager of the Criollos de Caguas of the Puerto Rican Winter League in both 1999/2000 and 2000/2001. In 2005/2006 Cora managed the Tiburones de La Guaira of the Venezuelan Winter League.