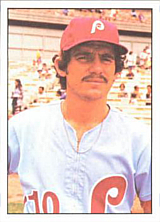 ".. A helluva coach. A great field manager. God, what a dickhead. I thought he was the biggest asshole in the United States of America. Of course, there are still days when I think that, but only some days. Not every day like before. Oh yeah, one more thing. The best thing that ever happened to me in my career was him becoming my manager." - John Kruk in I Ain't An Athlete Lady...

Larry Bowa had the first ever hit at Veterans Stadium in Philly on April 10, 1971. Bowa took over the Philadelphia Phillies' shortstop job from Don Money in 1970 and stayed for a dozen seasons. A fine fielder who won two Gold Gloves, the switch-hitting Bowa hit .260 for his career and stole 318 bases. He was the shortstop on the Phillies' 1980 World Championship team, hitting .375 in the Series against the Kansas City Royals. After the Phillies had a poor second half in 1981 and were defeated by the Montreal Expos in the NLDS, they made important changes to the club, including getting rid of Bowa (along with catcher Bob Boone and right fielder Bake McBride). In one of the biggest steals of all time, he was traded to the Chicago Cubs, along with minor leaguer Ryne Sandberg, for shortstop Ivan DeJesus after that season. Bowa was the shortstop for the 1984 division-winning Cubs team that lost to the San Diego Padres in the NLCS, while Sandberg of course went on to have a Hall of Fame career with the Cubs. Bowa finished his career with the New York Mets in 1985.

Bowa's playing record compares well with such Hall of Fame shortstops as Rabbit Maranville and may one day qualify him for election to Baseball's Hall of Fame by the Veterans Committee; Bowa failed to win the support of the Baseball Writers Association of America receiving 2.5% of the vote in 1991 and falling off the ballot. He was inducted into the Philadelphia Baseball Wall of Fame in 1991.

He is a baseball lifer, having spent 38 of the last 40 seasons in organized baseball. He has made the following stops:

He is the son of Paul Bowa, a minor league infielder and manager, the nephew of Frank Bowa, a minor league infielder, and the uncle of Nick Johnson. His first baseball card appearance was in the 1970 Topps set. Following the 1980 World Series, Bowa appeared with four of his Phillies teammates on Family Feud for one week in 1980. He, Del Unser, Mike Schmidt, Dick Ruthven and Garry Maddox played against five members of the Kansas City Royals: John Wathan, Willie Wilson, Paul Splittorff, Dan Quisenberry and Dennis Leonard.